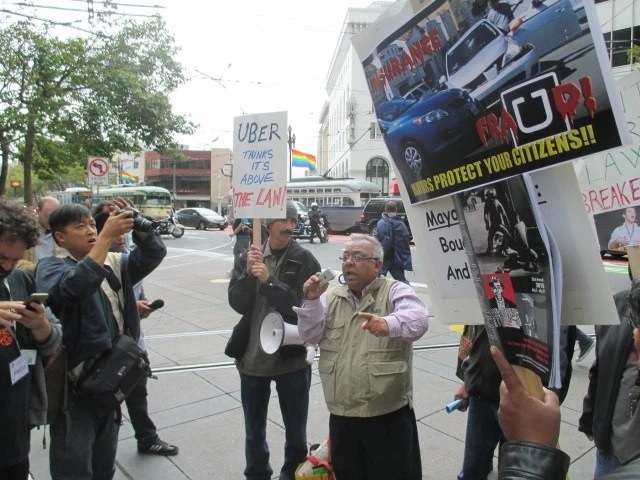 Pretty much everyone in San Francisco these days (except for Mayor Ed Lee) has come to the conclusion that Uber is a problem. Progressives, conservatives, even business leaders are noticing that you can’t get around town any more: With 45,000 Uber and Lyft vehicles on the streets, many driven by people who aren’t paying attention to the road because they are looking at the maps on their phones, traffic is as bad as it’s ever been.

It’s horrible for people who try to drive around town; everyone single person I know who drives regularly in the city is infuriated. It’s scary for those of us who normally use two-wheeled human-powered transportation: I can’t ride in the bike lane on Valencia Street on a Thursday or Friday evening any more, since the lanes are totally clogged with Ubers who pull in and out with no warning, make illegal U-turns, and act as if the bike lane was their private parking area.

Somebody’s going to get killed.

I remember the Uber folks arguing that “ride sharing” (no, it’s not sharing; that’s what happens when you help your friends, this is a commercial transaction) would get people to give up their cars. See? An alternative.

Instead, from what I can see (with no data, more on that later), it appears that a lot of people who have plenty of disposable income have decided that Uber is more convenient than Muni, so we have taken people off public transit and put them in cars.

That’s why there are so many more cars on the road. Or so it seems.

Meanwhile, Uber has a market capitalization in the stratosphere, the founders and the investors are getting really, really rich running what started as an illegal cab industry and was only retroactively legalized by the state Public Utilities Commission, which isn’t exactly the most trustworthy of organizations.

All of this takes a toll on the city – on the roads, on the time we all spend in traffic, on the danger to pedestrians and bicyclists. I suspect this is something that a nexus study could quantify.

Nexus studies are part of how cities survive these days under state laws that don’t allow us to raise taxes without going to extraordinary lengths. The Board of Supes can’t just tax Uber – but if we can prove that Uber has a demonstrable financial impact on the city, we can charge a fee to mitigate that impact.

That’s how we charge developers (far too little) for the impact they have on Muni. It’s how we set fees for converting industrial space into office space.

And maybe it’s a way to start taxing Uber and Lyft for the mayhem they are causing.

So maybe it’s time for one of the supervisors to call for the city controller to do a nexus study on how much Uber and Lyft costs San Franciscans in increased congestion (which wastes the time and thus the money of everyone on the road), increased road repairs, increased needs for traffic enforcement personnel, increased delays for Muni, lost revenue for Muni … I could come up with a long list of quantifiable impacts that these companies cause.

Then, by state law, we could charge the companies (NOT the drivers, the companies themselves) a significant fee every year to cover the costs.

Then maybe we can get state legislation (although I despair of Sen. Scott Wiener and Assemblymember David Chiu going after the “sharing economy”) that would allow us to limit the number of Uber and Lyft vehicles on the streets.

We are a transit-first city, and our transit is being attacked by private car companies.

Something must be done. Maybe we can start with a nexus study and a fee.