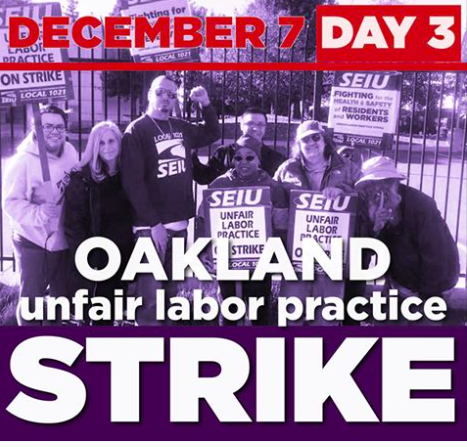 I shouldn’t be surprised that the mainstream East Bay news media are, to say the least, unsympathetic toward the Oakland city workers’ strike. The Mercury News says the City Council has already given away too much, and the workers are threatening to “kill the goose that lays their golden eggs.”

Just to be clear: Even if the city were to give the members of SEIU Local 1021 the raises they are asking for, the unionized workforce in Oakland will be falling behind the increased cost of living in their city. In other words, the workers aren’t even asking to be made whole; they’re asking not to lag even further behind in one of the most expensive urban areas in the country.

And it’s not their fault.

The Oakland workers didn’t ask for the Bay Area to become the tech capital of the nation. They didn’t ask for San Francisco Mayor Ed Lee to give a tax break to Twitter and other tech companies to attract more high-paid workers to a region that had no housing for them.

No: What’s happened is that cities that are basking in the new revenue from the tech boom – and that includes Oakland – didn’t budget properly for the impacts of that boom.

When you attract tens of thousands of high-paid workers to a region, and you don’t have the housing infrastructure in place to accommodate them, you drive up the cost of living, in this case radically.

The Yimbys argue that we need to build more housing, now, fast, build, build – but even if they are right (and I don’t think that model will solve the problem), it will be years before we begin to catch up.

Meanwhile, the workers who keep local cities running are getting screwed.

No, the Oakland workers don’t have a “golden egg” of pensions and health insurance. They have what everyone ought to have – decent access to health care – and that’s negotiated in union contracts. Pensions aren’t a gift from the taxpayers – they are deferred compensation. There have been many times in the past decade or so when local elected officials have offered better pension benefits instead of cash raises today; if the union members accept that, why are they to blame for the city’s financial problems? And most of their pensions won’t cover the rent in Oakland when they retire.

We have this extensive planning operation in the Bay Area, from city and county planning departments to groups like ABAG and MTC. They are supposed to look at future trends and prepare us for them.

But nobody – nobody, anywhere, unless I missed it and I’ve looked carefully – said that a region that encouraged a tech boom should set aside money to pay public employees enough to cover the increased cost of housing and increased living expenses that would come with that boom.

The Twitter tax break didn’t just cost SF $34 million a year. It cost tens of millions more in services for homeless people evicted to make room for tech workers, higher rent for nonprofits and city agencies, raises for public-sector workers, and other massive impacts that the people who are getting rich from the tech boom aren’t paying for.

And it had huge impacts on the rest of the region — but I never heard the mayor of Oakland, or the Oakland City Council, oppose that tax break.

We are now most likely the richest urban region in the history of the world. That wealth has gone almost entirely to the top one percent. On a national level, our Democratic politicians decry that; on the local level, they let it happen. In some cases, they encourage it.

So please: Don’t blame the Oakland workers for saying that they need more money to keep up with a crisis they didn’t create or ask for. If the city can’t afford to pay wages that keep pace with the cost of living, then city officials ought to be asking why the cost of living keeps going up – and asking how to make sure the people who are getting filthy rich at the expense of the rest of us can help pay their fair share.

I haven’t seen Mayor Libby Schaff and Mayor Ed Lee organizing the mayors of other big cities in the state to push the Legislature to allow city income taxes. I haven’t seen them leading the way on Prop. 13 reform.

I just see a welcome mat for tech companies – and no recognition of the economic impacts those policies create for everyone else.

It’s not fair to ask Oakland city employees to move 50 miles away and commute to work because they can’t pay the rent in the city that can’t survive without them. That’s why workers are forced to go on strike — and what the news media have completely ignored.

Full disclosure: Yes, I am biased in favor of labor. Always have been, always will be. I also edit the SEIU local 1021 quarterly magazine. Nobody at Local 1021 pitched the story to me, reviewed this story, commented for this story, or had any other influence over this or anything else at 48hills. My proud pro-worker bias is entirely my own.