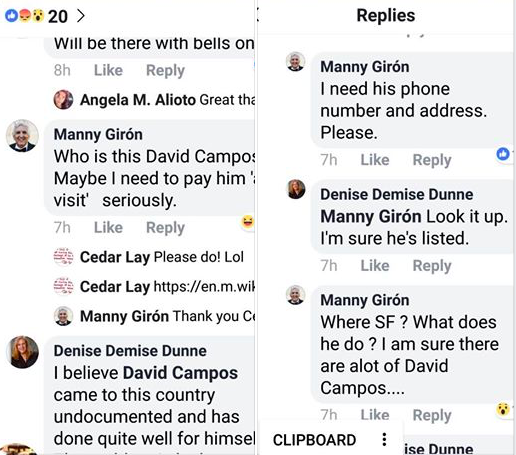 It started with Alioto’s post suggesting that somehow Campos was attacking her First Amendment rights by putting on the DCCC agenda an item about her efforts to repeal part of the Sanctuary City Ordinance.

Campos, like previous chairs, has a policy of putting anything on the agenda that an elected member requests. That’s what happened this time, he told me; Member Petra DeJesus asked for a discussion of the ballot measure, and Campos agreed.

But Alioto went a bit ballistic:

David Campos is attacking me again because I want to make sure that our Sanctuary Law does NOT protect rapists, murderers and people who do mayhem. ….

The operative words are “possible action”. I have a First Amendment Right to speak and several other Constitutional Rights to put an ordinance on the ballot. I cannot in America be punished as they are suggesting. They are over the top unhinged ideologies that will only make Trump president again.

Not to mention what they are doing to me is absolutely militant and should they “act”, they will be saying “good morning judge” for a very long time.

The only “action” the committee could take is to vote not to endorse the proposed ordinance or perhaps to denounce it and endorse the concept of Sanctuary City. One would think Alioto would know that.

There’s nothing that the DCCC could do to stifle her ability to put a measure on the ballot.

Campos told me that he found the comments threatening, and he’s right: When somebody who is siding with an politician who is attacking immigrants asks for the address and phone number of an immigrant-rights leader (who came to this country as an undocumented immigrant himself), and says he wants to “pay him a visit, seriously” there are plenty of grounds for concern.

Particularly when you go to the Facebook page of Manny Giron and see several posts about the importance of the Second Amendment and one that may or may not be a joke about buying a concealed weapon:

So, I got my concealed gun permit yesterday…..and went over to the local Bass Pro Shop to get a small 9 mm pistol for home protection.
When I was ready to pay for the gun and bullets, the cashier said, “strip down and face me.”
Making a mental note to complain to the NRA about the gun control wackos running amok, I did just as she instructed.
When the hysterical shreiking and alarms finally subsided, I found out she was referring to how I should place my credit card in the card reader!
I’ve been asked to shop elsewhere in the future. They need to make their instructions to me a little clearer.
I still don’t think I looked that bad.

I put this out there so that people can see that the anti-immigrant vitriol that we see at the national level exists even in our own progressive San Francisco. Trumpian attacks on immigrants only intensify the vitriol. That’s our sad state of affairs. Scary times for our country and our city.

Well, I tracked down Giron in San Antonio, where he is a political consultant. He told me that he lived for years in San Francisco, is a graduate of USF Law School, and was friends with Alioto’s father, the late Mayor Joe Alioto. He insisted that he never intended to threaten Campos:

“I looked the guy up and I’m very impressed, he went to Stanford and Harvard Law School, and I thought maybe I could meet with him and mediate this dispute with Angela Alioto. I’m a lawyer and a very good negotiator and I thought a third party could help work things out.

“Apparently I worded it wrong.”

Indeed he did. He has since apologized and said he meant no threats.

Giron told me he is a Republican, although he once worked on an election campaign for Barbara Boxer and he really likes Dianne Feinstein. He said he didn’t vote for Trump but that Trump “has some good points” about NATO and military spending.

He said he’s not anti-immigrant: “Most immigrants who come here from Mexico are just trying to get a better life, and they do jobs Americans won’t do.” But he supports Alioto’s measure (which, by the way, has not yet qualified for the November ballot).

Giron (and his credibility) aside, here’s how Alioto responded:

I TOTALLY Condemn any and all threats from either side. David and I can disagree, but there is no need to threaten anyone.

“From either side?” That’s like Trump blaming “both sides” for the white nationalist violence in Charlotte.

For the record: Neither Campos nor any of his supporters at any time threatened Alioto or anyone else. The only comments that could be seen as a threat came from one side.

Alioto has not responded to my email seeking comment.