A live cinema event to ‘Remember Los Siete’ in the Mission

Artist Vero Majano uses found footage and her own memories about the notorious 1969 trial to "remind people we are still here."

On May 1,1969, a pair of cops stopped a group of Latino activists on the Mission District’s Alvarado Street. In the ensuring altercation, one of the officers was shot and killed by the gun of his partner. The tumultuous trial of Los Siete de la Raza, the seven education activists who became suspects in the killing, was a galvanizing force for the Mission District community against systemic police brutality, one whose reverberations can be felt even now, 50 years later.

Artist and Mission District native Vero Majano remembers the story of Los Siete well from adults’ whispered conversations. Her endless proximity to the group evidences the mens’ centrality in the Mission community. So closely did the situation become tied to the neighborhood’s daily life for Majano that on Fri/26 and Sat/27 she is premiering Remember Los Siete, an impressionistic live cinema event based on found community footage and her own memories, at the Brava Theater Center. The production will feature live band The Comrades, and footage that Majano recovered via videographer Ray Balberan of Mission Media Archives, an important local archivist whose work Majano plans on curating in a future project.

Remember Los Siete is nearly the capstone of a month of events honoring the 50th anniversary of the seminal trial that included a bike tour, cabaret, art exhibition, and panel discussions. Still to come is a scheduled talk on the women-directed response to the Siete’s arrest on May 8, hosted by Shaping SF and featuring community activists, artist Yolanda M. Lopez, and Marjorie Heins, author of Strictly Ghetto Property: The Story of Los Siete de la Raza.

This collaborative delivery of Los Siete memories is the latest entry in Majano’s body of work, which stakes out space for Latino Mission District legacy in a rapidly-shifting San Francisco. Likewise, her 2015 collaboration with Hard French DJ Brown Amy and photographer Kari Orvik “The Q-Sides” re-staged the covers of East Side Story oldies compilations, re-centering queer bodies in lowrider community tradition.

Remember Los Siete director Mary Guzmán was eager to aid with this recuperation of memory. She tells 48 Hills that Majano can “put words together in a way that has never been put together, and describes a situation better than any words anybody else could come up with. She knows what to leave in and what to take out.”

In measured musings on the footprints a neighborhood can leave in our lives, Majano spoke with 48 Hills about the power of time’s passage and her newest work.

48 HILLS: How did you become acquainted with the story of Los Siete?

VERO MAJANO: I have known about Los Siete de la Raza since I was eight years old. It was a conversation that adults had around me, whispering. I have family members who were part of the supporting of Los Siete, I have an estranged older brother who was connected with Los Siete. I feel like Los Siete de la Raza in the Mission District, it kind of bumps into history, in a way. You know, that somebody’s uncle was involved, somebody’s cousin or somebody’s married to one of Los Siete, somebody did time with Los Siete. It’s a story that bumps into you around the Mission for some folks. It was the first urban story that I was attracted to.

48 HILLS: What made you want to create a play about these men?

VERO MAJANO: It’s not a play that I’m doing. What I’m doing right now is kind of like a new genre, they’re calling it live cinema. I’m going to be live-narrating the story while projecting very rare footage of the Mission District and Los Siete. I have a band onstage with me that will be doing a live score. It’s something that you have to show up and all experience together. I’ve made a couple films in the past, and I’ve also done storytelling, so it’s two of those things merging together.

Most of the footage that I have, I got from working with Ray Balberan. In the late ’60s, KQED didn’t have any people of color producers. So Ray and a bunch of other folks demanded that KQED make them producers, and they ended up getting 15 millimeter cameras. They taught people how to make films and document their community. I would go through these film bins that Ray had and I would find one that said “dance benefit” with the number “7” on it. It was from an actual dance benefit for Los Siete! We’re going to be showing that. The footage is very unique — it’s folks learning how to use their equipment, but 50 years later it’s this lovely document.

48 HILLS: What is the important takeaway for today’s Mission residents, or today’s San Francisco residents — or the world today — about what went on with Los Siete?

VERO MAJANO: With my work, I’m just reminding folks that we were here. I’m also hoping that it inspires other folks to continue to document their stories, whether that is through making a documentary, a book, a podcast, or whatever. Because I’m not necessarily a historian; I’m telling it from my point of view. 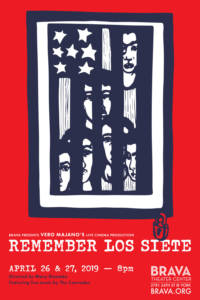 48 HILLS: That actually leads me to my next question, which was whether you could compare the creative process that you went through for Remember Los Siete with another project of yours that I love, the “Q-Sides” collaboration with Hard French DJ Brown Amy and photographer Kari Orvik?

VERO MAJANO: With that project, we knew what we wanted to do, but we had no idea what the outcome was going to be — and it was so beautiful, the way that it built community. I think “Q-Sides” has been my most queer-identified work. For me, that was like, “Yo, I was here, and I was queer.” I think what’s similar is that both [projects] are about leaving a mark in San Francisco. With my work, I’m trying to include the Mission in San Francisco history.

48 HILLS: Where do you go when you want to see the Mission that you grew up with — apart from the footage that you work with?

VERO MAJANO: I think what’s unique about me being here 50 years is that I get to age with the people of San Francisco, together. Meaning, the guy who has been on the corner for the last 30 years, or the bus driver that’s been here forever. Some of them are getting grayer, a little thicker. The girl whose a woman now, my age. Damn, she’s still looking good, and she’s aging. They’re markers. That’s very precious to me right now. The homie who used to hold that block, and now they’re not really holding the block anymore, but they’re still there. They may be sitting on the block — not holding it — and they’re still playing the damn same oldie on a tape player. Those are the things that I pay attention to in San Francisco, in the Mission. If you look really wide, you see nothing but hella change. But I think if you narrow it down, just look at the small details, you’ll find that Mission. Whatever your Mission looked like to you, you’ll find it.

Beloved performer Per Sia speaks about hosting a Muertos drag show at the yearly exhibition—and what a queen brings to celebrations of resilience.
Read more
Sponsored link

Under the Stars: Brijean baptizes with the beat, Zyah Belle’s on the rise

Plus: Noriko Miyamoto reissue shines a light on Japanese funk history, and a pit you can't miss.
Music

Plus: Housing nonsense in the Tenderloin, a Berniecrats art show—and who will replace Nancy Pelosi? That's The Agenda for Aug. 15-21