An alternative to calling 911 might save lives by avoiding armed law-enforcement response. 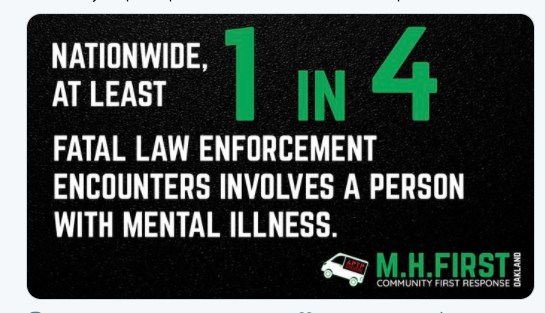 The hotline, which went live at 8pm, is meant as an alternative to 911 calls in response to mental health emergencies, and to offer longer-term help that is more sensitive to the needs of those receiving help than responses from law enforcement, who often lack the extensive crisis intervention training and experience that mental health professionals have.

“The first night went really well,” said Daniela Kantorova, president of Psychologists for Social Responsibility and a co-founder of MH First Oakland. “We had two calls and two voicemails. The people we talked to were very appreciative of the service…I think they felt seen and supported.”

APTP and MH First Oakland co-founder Cat Brooks said that in creating the hotline, APTP hoped to work towards destigmatizing mental illnesses and those who suffer from them, particularly in underserved communities.

“We need to stop criminalizing mental health crises and destigmatize them so we can get people the help that they need.”

This is the second hotline created by the group, following MH First Sacramento in January.

“It’s about humanizing the human condition, rather than criminalizing it,” said Brooks. “Understanding what got you to that place, what are the conditions that ended you up in that place, how we can avoid those things and then what is the long-term path of healing for you. That’s not what our system is set up to do.”

Volunteers with MH First Oakland receive anywhere between 15 and 60 hours of training in de-escalation, harm reduction, first aid, and Narcan administration, developed by MH First Sacramento, along with community input, depending on their professional background and experience.

MF First Oakland is not the first or the only hotline dedicated to connecting people suffering from mental health issues, housing issues, or substance abuse issues to resources. Alameda County’s 211 helpline includes a 24/7 supportive counseling hotline, but MH First Oakland is unique as it plans to have a team of volunteers trained in de-escalation, first aid, and Narcan administration who can be dispatched on-site, if necessary.

The live dispatch service has been postponed during the pandemic to protect its volunteer workers and those seeking services. Kantorova said that the lack of a dispatch may impact the hotline’s effectiveness, but is still committed to providing beneficial counseling services remotely.

“I think the hotline can very useful, it can bring some benefits…talking through situations and offering resources, guidance, emotional support, it’s a start and hopefully before long we can launch the dispatch teams as well. For now, we are trying to be safe,” said Kantorova.

Kantorova said that she is eager to resume dispatch services, but only when she can be confident that they would not be risking the lives of volunteers by doing so.

One of the primary reasons behind MH First Oakland’s creation is due to the dangers inherent to a police response to mental health crises. According to a 2015 report by the Treatment Advocacy Center, one in four people killed by police suffer from untreated severe mental illnesses, and those same individuals are response for one out of ten law enforcement responses.

Kantorova said that the large number of mentally ill people killed by police justifies the need for an alternative resource for people to call during mental health emergencies instead of 911, citing the death of Errol Chang, who was killed by the Daly City SWAT team in Pacifica in 2014 during an episode of schizophrenia.

“The advantage, to me, is obvious,” said Kantorova. “We have seen so many murders by police of people who have been in mental health crises… it’s been very apparent that police are not a safe responder to mental health crises; they are more likely to cause further harm…rather than having a team of social workers, or mental health professionals, or peer counselors to come in and provide support.”

MH First Oakland is also in part a response to a lack of trust in police among members of marginalized communities. According to Brooks, many members of communities of color impacted by police violence do not call 911 as they themselves have had bad experiences with law enforcement and do not trust the police to safely handle emergencies related to mental health, domestic abuse, or substance abuse, leaving them with few options for getting a timely, in-person response to address these sorts of crises. Brooks pointed out that in situations like domestic violence, for example, which has increased during COVID-19, an alternative to a 911 call can be extremely important, as the police and the justice system often do not meet the survirvors’ needs, because a police response is intended to punish the abuser rather than provide long-term care for survivors of domestic violence.

Brooks added that in situations of domestic violence, police responses are not proactive, but only happen after abuse has taken place and are not suited to offer long-term help to survivors.

“It’s usually a one-shot deal. When they incarcerate somebody, the person comes home and the cycle goes on, as opposed to having somebody come and assess the situation…and offer a continuous stream of help moving forward past the incident,” said Brooks.

As MH First Oakland continues operations, the hotline will expand its staff by another 20 volunteers throughout September, and then will draw volunteers from an interest list of several hundred people over the next several months, according to Kanterova. The MH First Oakland team will use these first days of operation to create parameters volunteer dispatchers can use to determine whether an in-person response is needed, or whether remote counseling over the phone is sufficient.

“One of the things that we’ll collectively develop together with MH First Sacramento is what are the pressure points that would mandate an in-person response. Are police already on the scene? Is someone in immediate danger to themselves…That will be something that we learn as we adjust to the new paradigm of this virus.” said Brooks.

MH First Oakland operates from 8pm to 8am on Friday and Saturday nights. The hotline can be reached via call or text message at 510-999-9MH1, or via Instagram, Twitter, or Facebook @MHFirstOak during operating hours.