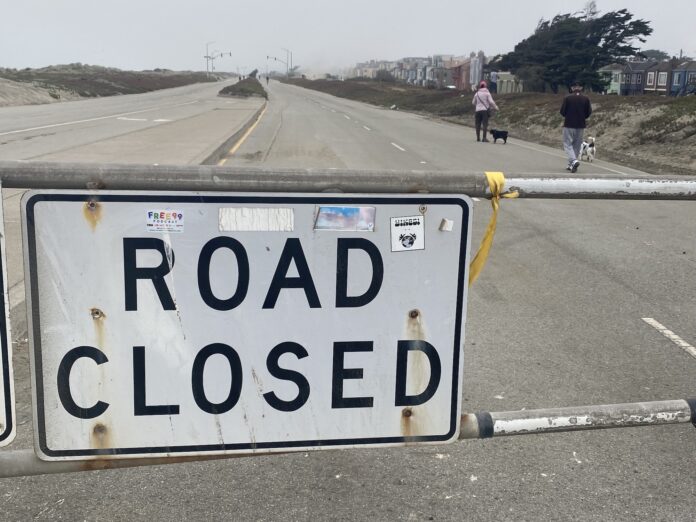 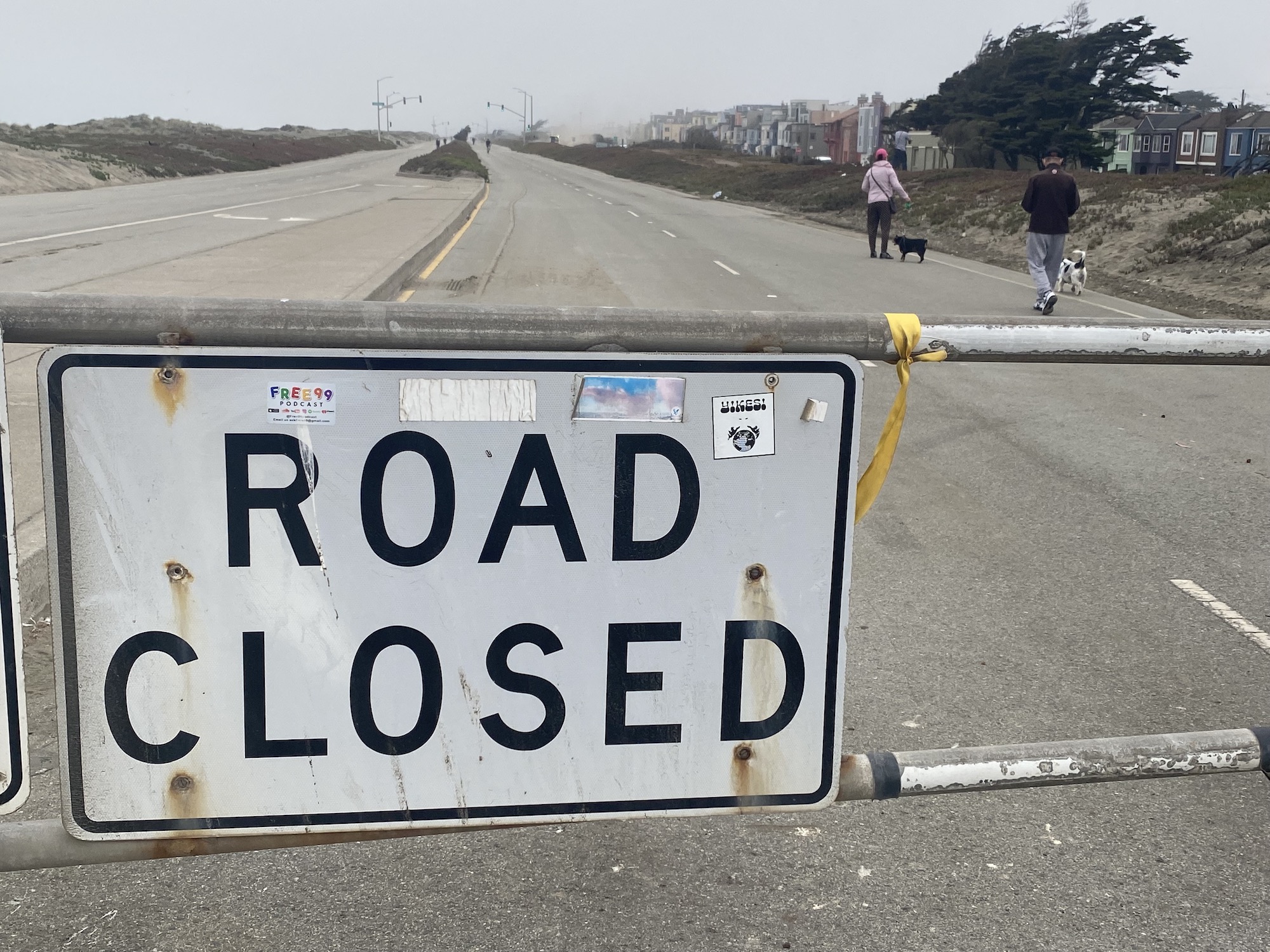 Curtailing a beloved open space as Delta rages on is terrible timing and a community detriment.

The car-free Great Highway was probably the best thing in my life to come out of the pandemic.

According to Strava, the fitness app, I’ve biked up or down it more than 70 times since April 2020, when all four lanes of it closed to cars in a gesture to cooped-up urbanites in need of socially distanced fresh air. When everything else was shut down entirely, it was there, a flat, two-mile straightaway, four lanes across—like no other road of its length in San Francisco.

As the Examiner’s Carly Graf noted, it was the second most-visited open space in the city over the past year-and-a-half. Maybe I’m just an idiot Pisces, drawn to the sea, but I’ve never spent so much time over there. I can leave my house in the Mission and be smelling saline air in under 30 minutes, transfixed by the ice plant-covered dunes and the beach crows and the colorless horizonlessness of the Pacific in August.

That extended idyll is pretty much over now. On Monday, Aug. 16, the Great Highway will reopen to vehicular traffic on weekdays. Mayor London Breed issued an executive order to that effect last Thursday, mollifying West Side residents who objected to the extra traffic the road’s closure diverted into their neighborhoods.

Car-dependent, suburban-scale neighborhoods dislike cars, it turns out. But lots of people have loved the Great Walkway/Great Bikeway—more than 30,000 each week. Yet it was almost as polarizing as a honeybear in polarized sunglasses. Breed’s sudden decision by fiat feels more like an I’ve-had-just-about-enough-of-this flourish than some Solomonic compromise between the various factions.

As a thoroughfare, though, the Great Highway is strange. It was built in 1929, more for touring in a Model A than as a commuter artery. You can’t even get on or off it between Sloat Boulevard and Lincoln Way, on the south side of Golden Gate Park. Along with the 17-Mile Drive in Monterey and Marina Boulevard in Santa Barbara, it’s one of very few places in coastal California where there’s a major route west of Highway 1.

Its closure didn’t feel like a top-down act of municipal beneficence. It felt organic. Passing under its dozen pointless traffic lights made the Great Highway seem like the anachronistic curio it is. There are families and joggers and surfers and kite-flyers and older adults and dog-walkers and roller-bladers and power athletes, all sharing a snatched-back patch of asphalt, a non-commercial western Embarcadero.

The cutest moment I had was swerving to avoid a kid with training wheels who wasn’t looking where they were going, then making wordless eye contact with their embarrassed parent as if to say, “It’s cool. They’ll figure it out. We’re all having fun over here.” Taking the Great Highway away from kids and puppies is unimaginative, yes, but fundamentally, it’s just Grinch-y.

Maybe its demise would bother me less if its proponents weren’t so intellectually dishonest. For instance, it’s frustrating to see people claim that shunting traffic to local streets increases “smog.” Smog, while certainly exacerbated by internal combustion engines, is a regional atmospheric phenomenon generated when sunlight cooks stagnant air. It’s not the same thing as tailpipe exhaust.

What these people really mean is “I don’t mind encouraging more smog in the aggregate as long as I can drive where I want, when I want.” I wish they would connect another dot or two and realize that driving is the no. 1 source of greenhouse gas emissions in California, and our overreliance on it is partially responsible for the Dixie Fire, already the second-largest wildfire in state history. Car crashes and road accidents are also the no. 1 killer of young people in America.

But middle-class Californians’ love of the car remains an irresistible force. And a vehicle-free Great Highway, we now know, was anything but an immovable object. Reopening it has caused some surreal contradictions. Even as the northern segment of the Great Highway is given back to cars, the southern section is set to be permanently rerouted—because rising sea levels are already eroding the current alignment. Managed retreat for one half and Teslas and Highlanders for the other makes very little sense.

Its loss is only one of a series of reversals. After neighbors complained about petty crime and excessive teenage partying, the southern half of Twin Peaks Boulevard—which is much, much scarier to bike or walk on with drivers whipping around the hairpin turns—was ceded back to cars. JFK Drive in Golden Gate Park is almost certainly next. If the timing of these retrograde moves is supposed to indicate that the pandemic is over, what more proof do you need that it isn’t?

This is all happening in our ostensibly transit-first city—whose transit system happens to be beleaguered and distressingly expensive. If only we could be more like Paris, which experimented with converting a two-mile section of highway along the Seine to pedestrian and cyclist use during the summer before decommissioning it entirely. Even centrist technocrats like Secretary Pete agree that roads are not the answer to traffic.

Meanwhile, I’ve pedalled more than 3,700 miles since COVID hit. Cycling has helped me keep my shit together more than anything else these last 18 months. I know I’m not alone. At some point, what had been a convenient way to get around town without enriching Uber turned into an obsession. In March, I turned 40 and got myself a Masi (the most expensive thing I ever bought). On Jan. 20, the day the Trump administration finally ended, I rode 35 miles in a big circle around the city, which was my longest ride to date.

On Memorial Day, a friend and I rode 112 miles in a loop to Pescadero and back. I have never been an athlete, and now I’m filling up two water bottles and shoving energy bars in the elastic pocket of my jersey to head to the Marin Headlands. This is all still very weird for me.

I’m a stronger cyclist as a result of having the car-free Great Highway, and a more patient one. I think I’m even a better journalist. As a connector between routes, it opened up the southern and western quadrants of San Francisco for me, and I think I have a sharper spatial orientation of the city and how neighborhoods relate to one another. Old Mandarin Islamic no longer seems so far away. There are way more pink houses than I thought.

We still have it on the weekend, it’s true. But I’m really going to miss clearing my head on a Wednesday morning, passing the break in the dunes by Noriega Street and that row of homes in the same bold palette at the foot of Ulloa. With or without cars on it, the Great Highway was always temporary. Rising seas will eventually claim it. It is fragile and precious. It was so Great while it lasted.

A farewell to SF Weekly

Editing San Francisco's last alt-weekly paper was probably the most fun I will ever have in my life.
Read more
Art

The world’s drowning in plastic. Does ‘In Balance’ offer a liferaft?