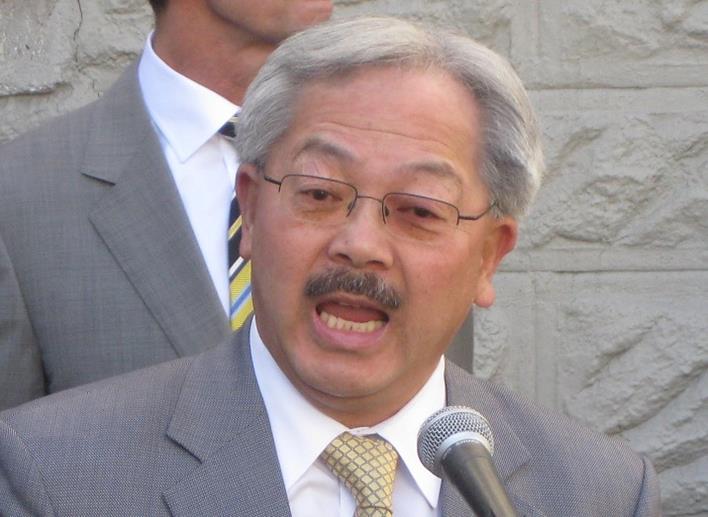 Mayor Ed Lee has a serious budget problem. And it could become a serious political problem.

See, the city is flush with a lot of new money from the tech boom. Not as much as we might be getting, since the Twitter tax break exempts many of the new companies, but still: It’s a good year for the budget.

And yet, it isn’t. Because the same increase in tech employment that brings money into the city coffers drives an increase in the cost of living – and the unions representing city employees are demanding a raise to (almost) start to keep up.

The Chron likes to talk about the price tag for city employee contracts – but what we aren’t hearing is the other side of the story. If the cost of living in this city hadn’t gotten completely out of control, thanks to the mayor’s embrace of the tech industry, the workforce wouldn’t need as much money to stay here.

How does it all add up? Well, let’s see:

The average city employee (if you include the cops, firefighters, skilled health workers, and senior managers) makes $93,000 a year. That sounds like a lot — but if you look at the average non-public-safety and non-management person, it’s much lower, about $51,000 a year for the average member of SIU Local 1021.

The median apartment in San Francisco costs about $3,000 a month, or $36,000 a year. That’s way more than half of the average line workers’ salary — and the federal standard for spending on housing is about 30 percent.

To afford the average apartment, you need to make more like $100,000 a year, double what the average SEIU member makes. No wonder they’re asking for a raise; in fact, what the city employee unions are seeking (and the mayor is resisting) is only a fraction of what they need to stay in the city.

Then there are the nonprofits. San Francisco outsources a lot of its social services to nonprofits, which means they get city contracts – which ought to at least go up to reflect the cost of providing those services.

Let’s just talk about rent for a moment.

According to information released at a hearing last fall, there are 1,425 nonprofit organizations that have contracts with the city. The total tab for those contracts: $528.8 million a year.

The average nonprofit budget is $4.8 million, and the average rent is $224,000 — that’s about 4.6 percent of the budget currently going for office space.

In the past year, the average rent increase has been 33 percent.

Let’s play that out. If 4.6 percent of $528.8 million goes for rent, that’s about $24.3 million a year in public money that goes to private landlords. Hike that by 33 percent and you’re looking at a bite of about $8 million. The city is going to have to pay that – or accept that some services will no longer happen.

And, of course, nonprofit employees want to see pay hikes, too – they typically make less that city employees, and are being squeezed even more. So there’s another line item that has to go up.

I have been reading Thomas Pikkety’s Capital in the 21st Century (short review: It’s an amazing analysis, and you can get the point from just the first couple of chapters. Longer review when I finish the rest.) Piketty demolishes what he calls the premier mainstream economic argument of the post-War era, the notion that growth helps everyone, that “a rising tide lifts all boats.” The facts don’t bear that out; it’s just deeply, profoundly wrong.

So is the notion that the tech boom in San Francisco is helping everyone. It’s helping a few people, and, I would argue, hurting a lot more.

Mayor Lee’s “jobs agenda” has actually been an agenda of creating new jobs for people who don’t live here, and attracting new well-paid workers to a city that has no surplus housing stock for them to live in. I haven’t seen a fair analysis of this, but I suspect that the longterm unemployed in San Francisco, many of them people who lack education and training for the tech jobs, are not working at Twitter or Zendesk. I’d argue that the unemployment rate has gone down (again, based only on anecdotal evidence, the state EDD tells me nobody there keeps this kind of data) in part because unemployed people have moved out of the city, and people moving here to take new jobs have replaced them.

The “jobs agenda” and the tax breaks that attract tech firms here are not just the Invisible Hand of Adam Smith; they are public policies, created by and pushed by the mayor. And they have impacts.

Now: In the bad old days, when Dianne Feinstein was mayor and she was trying to defend a similar “jobs agenda” – building new highrise office towers to attract big corporations to the city – her planning director, Dean Macris, used to say that the city should encourage growth, but “vigorously mitigate the impacts.” The growth happened; the “vigorous mitigations” never did.

But let’s take that as a solid planning principle. If you want growth, you have to recognize that it has a downside, and you have to look at how to limit that negative impact. For most working San Franciscans, the biggest impact is the cost of housing.

An important aside: Lee’s affections aside, tech is by no means the biggest employer in San Francisco. More than half of the top-ten employers in the city are public agencies, so government is one of the biggest. Hospitality and health care dwarf tech. Relatively few government employees make tech-level salaries; some do in health care, but most don’t. Almost nobody in hospitality makes six figures except the folks at the very top.

Those folks are now facing impossible housing costs. Unless they have longtime rent-controlled apartments (and have managed to avoid an Ellis eviction) or own their own homes, they can’t afford San Francisco. Which means they have to spend more of their limited income on longer and more expensive commutes.

So how do you “mitigate that impact?” Well, you can build affordable housing, which we all support – but not fast enough to make up for the displacement that’s happening. And housing is expensive: Creating enough to handle the need right now would cost San Francisco upwards of $1 billion. (Not $1 billion over 20 years; $1 billion right now.)

Just bringing public housing up to code and repairing units that are vacant so people can live in them is a $100 million project, and there’s no federal money for it.

So let’s look at the things the mayor would have to put into his budget to prevent the tech boom that he inspired from harming other residents of the city.

Second, at least tens of millions for nonprofit rent hikes and employee raises.

Third, at the very least hundreds of millions of dollars for affordable housing (again, right now, from the General Fund).

Fourth, at least tens of millions more for Muni service.

See why the mayor has a budget problem?

The money that the tech boom is bringing in to the city’s coffers is nowhere near enough to pay for the costs the boom is creating. At least, that’s my hit on it. I’d love to see someone ask the Budget Analyst’s Office to do a real study.

Because in my 30 years or so doing this, I’ve seen one clear pattern: New development never pays enough in tax money to “mitigate its impacts.” And the tech boom is pretty much the same story.

Anyone think this will be the defining theme of the budget discussions this spring?

(Full disclosure note: While I try to raise enough money for 48hills to actually pay myself a living wage, I’m taking on outside freelance work. As a freelancer, I am helping edit the member newsletter of SEIU Local 1021, which, of course, represents city employees seeking a raise. I am also on the board of Legal Assistance to the Elderly, a nonprofit facing a tech-driven rent increase that will force the organization to absorb a budget cut and move to a smaller office. I am teaching at City College and San Francisco’s State’s Osher Institute of Lifelong Learning, and recently did a class at USF. I helped my friend Don Ray with a training session for public defender investigators and he spoke at my City College class; no many changed hands. I will continue to update any future conflicts in the unlikely event that anyone else out there offers to pay me for anything.)

Previous articleSupes vote 7-4 to oust Angela Chan from Police Commission
Next articleHow do we solve the Airbnb problem?

If Chiu becomes city attorney, his seat will be open for a special election.