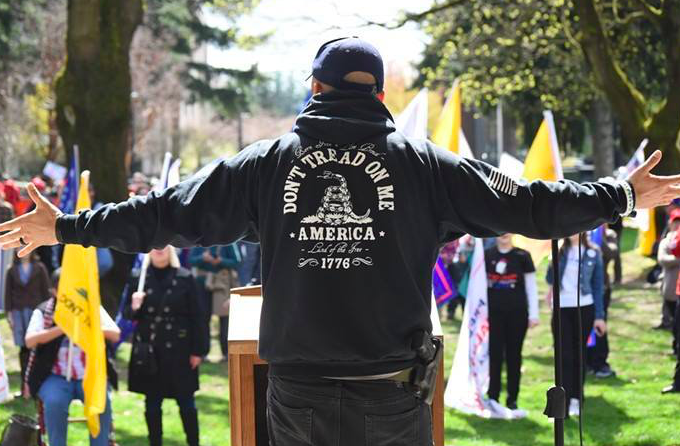 Joey Gibson, leader of the right-wing group Patriot Player, that had planned a Saturday rally at Crissy Field in San Francisco, said Friday that he had decided to cancel the event and hold a news conference instead.

Many feared that the rally would attract white supremacists and neo-nazis. City officials have been on edge fearing violence and according to emails about The Examiner’s Joe Fitz staff at San Francisco, General Hospital was instructed to prepare for mass casualties or injuries.

On Facebook Live, Joey Gibson of Patriot Prayer said the news conference would be held at 2 p.m at Alamo Square in the Western Addition.Gibson said speakers that were scheduled to speak at Crissy Field will be speaking at the press conference tomorrow.

The press conference is also likely to attract protests — and it’s not clear if they need or will get a permit for a press event at a city park. However, Parks & Recreation does require permits for events larger than 50 people.

Weighing on the issue, President of the Board of Supervisors London Breed asked people not to be alarmed: “Crissy Field rally canceled by organizer. Now they plan to hold press conf (sic) in Alamo Sq. Please don’t be alarmed, we are working on it!” Breed said on Twitter.

Alamo Square is in a residential neighborhood. It’s also a huge tourist attraction.We have not yet heard from Mayor Ed Lee, but if the city wants the same safety precautions as the National Park Service imposed, Rec-Park and the police will have to scramble to block off the park, limit access, and set up checkpoints.

We have not yet heard from Mayor Ed Lee, but if the city wants the same safety precautions as the National Park Service imposed, Rec-Park and the police will have to scramble to block off the park, limit access, and set up checkpoints.

What happens if Lee’s office refuses to issue a permit for the event? What happens if Gibson and his supporters show up anyway — and so do a lot of protesters?

UPDATE: San Francisco’s top officials are currently in a meeting to discuss the city’s response to the Patriot Prayer’s press conference scheduled for tomorrow.

UPDATE: SF Rec Park says no permit has been issued. But Police Chief Bill Scott says the city will not try to stop the event. Meanwhile, security around Crissy Field will remain, and bus routes still closed. (Just in case this is a fake, and they still try to do the rally there)

We will continue to update this post as more information becomes available.