On Feb. 12, as the SF Chamber of Commerce announced a new CEO, Mayor London Breed announced that her administration is making great strides in addressing homelessness:

“While we have work to do, what we are doing is actually working. Since July, when I took office, we have been able to get almost a thousand people off the streets in San Francisco,” Breed said, prompting thunderous applause.

Okay, then: If that’s the case, why is there no significant decrease in the numbers of homeless people in San Francisco?

The city has spent a lot of money, and done a lot of good work, getting people off the street and into supportive housing. This is the data on how many people went from the streets to some kind of housing in the year before Breed took office: The number is 2,218.

Also, about 15 people a week get housed because someone else moved out of that housing – possibly back to the streets.

So it’s easy to say that 1,000 people have been taken off the streets in the past six months; that’s about the standard number for the city, over the past several years. Nothing new. No reason for Breed to brag that she is doing anything different or better than her predecessor.

I asked the mayor’s press office to provide me with the specifics of where that number came from. They declined.

The bigger issue is that more people become homeless every day, every week, every year, through evictions and loss of jobs and the price of living in a city defined by a tech boom that Breed supported.

“For every person they house, two more become homeless, so prevention is a big hole,” Jennifer Freidenbach, director of the Coalition on Homelessness, told me.

And let’s look at what Freidnebach calls “churn.”

This is where already traumatized homeless people are further traumatized when they are sent from the street to a program and back to the street again. It further destabilizes them, erodes trust in the system, and does further harm, often exacerbating addiction and mental health issues.

City studies show that roughly half of the people who are given supportive housing wind up back on the streets within five years. That, Friedenbach says, is because the city doesn’t provide enough services to those residents:

Prop C will allow us to give intensive care on the streets that follow people into housing – ensuring a higher level of care then is typically available in supportive housing, with a larger system for residential treatment when needed.

Then there are the people with acute mental illness who are taken to SF General and then sent right back to the streets: 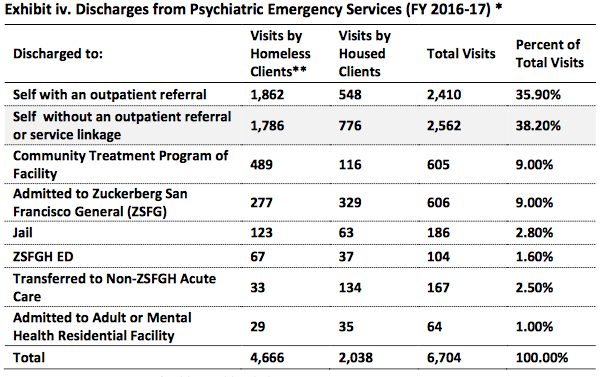 Almost 1800 folks brought into Psychiatric Emergency Services (generally by police in handcuffs) because they were thought to be in danger of harming self or others/gravely disabled, then found to by medical professionals not to be, and released back to the street with NO referrals to services at all. Prop C will expand behavioral health dramatically, and ideally, the expanded system would be able to care for those in this situation instead of sending them back to the streets.

Breed opposed Prop. C, but is now talking about funding it. Her opposition is one reason that the issue is in court; if she had actively backed the measure, it might well have gotten a two-thirds vote, and would be in effect right now.

We have seen this problem over more than two decades. The city provides (some) shelter, (some) affordable housing, increasing numbers of navigation centers – and the total number of homeless people on the streets doesn’t come down.

I have not yet seen any indication that London Breed has a different approach.

So Breed can celebrate and get applause for taking 1,000 people off the streets – but 1,000 more San Franciscans who are evicted, displaced, released from SF General, and generally cast aside by the tech boom are taking their place.

That’s nothing to celebrate at all.