By Tim Redmond
April 12, 2015
Share on FacebookShare on TwitterShare on LinkedInShare on RedditShare on Email

APRIL 13, 2015 – It’s not always a bad idea to borrow money. Most people have to borrow to buy a house or a car (and the United States likes the idea or borrowing to buy a house so much that it allows you to write the interest on a mortgage off your taxes). Business borrow to make investments.

The federal government borrows money to pay for military adventures, which is not so bright. But cities and states borrow money to do things like build infrastructure, repair things, upgrade parks, and invest in (sometimes) worthwhile civic projects.

The most basic way that works is by issuing general-obligation bonds – that is, the city sells notes that are backed by the full faith and credit of the city. Right now, the city’s credit is really good, and interest rates everywhere are low. Seems like a good time to invest in some of the things San Francisco desperately needs – like, for example, affordable housing.

But for years, the city’s had this policy of not selling any new bonds until some existing ones are paid off. That keeps the debt level from rising – which sounds like fine and sound fiscal policy. But it limits our ability to respond to changing needs, times – and interest rates. We could probably borrow a few billion dollars today and pay far less interest than we are paying on old bonds, and less than we might have to pay in the future.

But here’s the problem: Bonds are paid off by property taxes – and if you sell more bonds, you have to raise taxes. Oh, and you have to get two-thirds of the voters to agree to do it.

So city officials have been loath to do anything that might anger the small (but not insignificant) number of homeowners who don’t want to see any tax hikes – and the landlords who don’t want to pay more taxes unless they can pass those costs along to their tenants. Passing a bond that incurs even a small property-tax hike is difficult.

It shouldn’t be: Most San Franciscans agree that Prop. 13 is bad, that commercial property owners have made a killing at the expense of homeowners, that the measure has crippled schools and municipal government all over the state. And when there’s actually a way to raise property taxes – buy selling bonds for something good – we ought to be able to convince two-thirds to go along.

But we don’t try: Instead, City Hall creates long-term plans to float new bonds only as there’s room in the cap. And those ten-year plans are important: Investing in public needs is a huge issue. But there’s nowhere near enough scrutiny on how those plans are set and what the priorities are.

Case in point: The press has pretty much ignored the fact that the city’s Budget and Finance Committee will meet Wednesday/15 to consider and adopt a plan for bond priorities through 2025. Once it’s set in place, it can be changed (the mayor wants $250 million this fall for affordable housing, which wasn’t a priority in the last plan) but it’s hard. In reality, once these priorities are set, they don’t tend to change much.

When I was critical of the last park’s bond – not because I don’t like parks, but because I didn’t like the leadership and priorities of the Rec-Park Department – I was told that we had to pass a park bond in 2013 – because there wouldn’t be another slot for park bonds for five more years. The priorities had already been set.

So what are we talking about now? Here’s the plan for the next $1.7 billion in bonds:

Then there are “pay-as-you-go” General Fund expenditures and “certificates of participation,” which are another way of borrowing money, generally at a higher rate. 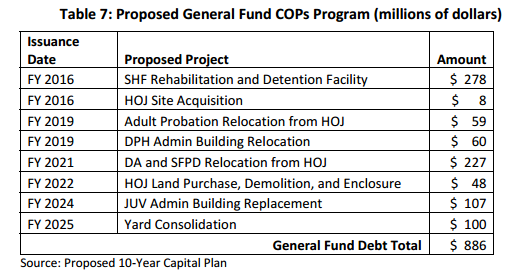 Among the priorities: A new jail and the complete overhaul of the Hall of Justice, which isn’t up to seismic code.

Sup. John Avalos is suggesting that the city ought to double the affordable housing bond this fall. There might be people who want to argue that right now, today, housing is more important than parks. Maybe it’s more important than the next transportation bond. Maybe there are things that ought to be on this list that aren’t.

Maybe homes are more important than a new jail. Maybe the whole $1.7 billion ought to go for housing.

Maybe we should reconsider the idea of only borrowing money when it doesn’t mean a tax hike – particularly now, when money is so cheap.

That’s why this gets discussed in public – and if you want to weigh in on the plan, the meeting’s at 1pm in Room 250, City Hall.

Housing activists have been fighting for years to get City Hall to take seriously the balance between market-rate housing (that is, luxury condos) and affordable housing, which the city’s own studies say ought to comprise 60 percent of the new construction.

Sup. Jane Kim had a plan to make it hard to build new market-rate housing until the affordable mix was higher, but the mayor shut that down. Now Kim’s  is pushing legislation that would at least require the city to monitor the balance. It comes up at the BOS Tuesday/14.

The Public Safety and Neighborhood Services Committee, with Sup. Eric Mar and Sup. David Campos as a majority (joining Sup. Julie Christensen) is becoming a place where progressive ideas are heard. On Thursday/16, Mar and Campos are holding a hearing on “equitable access to broadband internet service in San Francisco,” and considering what my Comcast bill is (and the level of service I get if there’s a problem) it’s pretty clear that we have a problem.

And there’s a possible solution, too: Why aren’t we talking about municipal broadband?

The city already owns a lot of underground fiber. It connects public buildings, and if you add in what other public agencies have, there’s the beginning of a citywide network.

We are moving toward public electric power (slowly, but we are getting there.) Does anyone think that Comcast is doing such a bang-up job that a little competition from Muni cable couldn’t help?

And mark your calendars: Sup. Julie Christensen, as part of her re-election effort, will appear before the SF Democratic County Central Committee Wednesday/22 for a Q and A. It’s open to the public. There will also be discussion on an early endorsement of Mayor Ed Lee. 7pm, 450 Golden Gate.

Plus: An urban farm in the Portola, and shadows on two city parks ... That's The Agenda for July 26-August 1.
Read more
Transportation

Western Addition public housing project has been a disaster -- but a private contractor ran it with very little oversight.
Read more
Transportation

Muni needs to change—but the mayor indicated that cuts and 'efficiency' are the main goal.
Read more
Sponsored link

Post-COVID plans could alter the city's transportation policy in some profound ways.
Opinion

The political world is full of surprises. Who will wind up winning the seat formerly occupied by Attorney General Rob Bonta?
Art

The Great AAPI Elder Print Off aims to reflect the complex feelings and stories of seniors in a time of rising hate.