My first job in San Francisco was in the Redstone Building, at 2940 16thStreet, near the 16thand Mission BART plaza. I worked as a canvasser for the Abalone Alliance, the antinuclear group fighting PG&E’s Diablo Canyon plant. And every low-budget, grassroots nonprofit in town seemed to have offices in the building.Theater Rhinoceros, an early LGBT theater company, did shows in the basement. I think we paid something like $100 a month for our office. 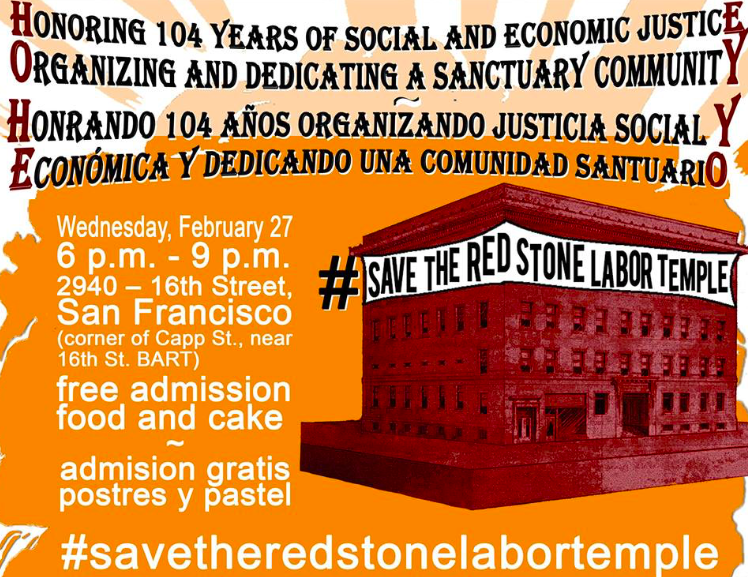 The Redstone was an amazing place – and back then, I didn’t even know its history.  Which is also amazing.

The 1934 General Strike, which changed the labor movement in the United States forever, was planned and executed at 2940 16thStreet. The building was known as the Labor Temple, constructed by the Labor Council, and occupied for much of the 20thCentury by lavor unions.

Now it’s a community center, with unions (the United Taxicab Workers), community groups (the Western Regional Advocacy Project) and media (POOR magazine) occupying some of the last affordable space in the Mission.

There are, Paul Boden, a tenant and organizer, estimates, 12 nonprofits, 60 artists/community organizers, and six small businesses. Boden, who runs the Western Regional Advocacy Program, said some 50,000 constituents are served by the tenants of the Redstone annually.

And the history and the community is facing an existential threat.

The owner of the building wants to sell, and is asking for $25 million.

To put that in perspective: Documents in the city Assessor’s Office show that David and Sandi Lucchesi bought the place in 1992; it’s assessed at a little more than $2 million, and they paid even less for it.

The Mission Economic Development Agency wants a chance to buy it. The negotiations continue, and MEDA has made a final offer of $18 million.

At the price the owner wants, all of the leases would rise dramatically and it’s likely all of the existing tenants would be displaced. “None of us have long-term leases,” Boden said. “We are all on month-to-month.”

Due to some tax loopholes, our landlord is discovering that he could sell the building for more money than what we are offering. We need your help to convince the city that preserving San Francisco’s 100+ year old center for arts and human rights advocacy is critical to preserving the socio-cultural fabric of this city itself. SPECULATORS OUT! SAVE THE REDSTONE LABOR TEMPLE.

On Wednesday/27, organizers are holding a rally and community event to honor 104 years of economic and social justice at the Redstone and to work for a community solution. 6pm to 9pm, free.

This matters, a lot. It’s a key statement about whether there’s still a future for a Mission District that has room for the community-based organizations that have served and defined the neighborhood for decades – and whether history and public service matters more than cold cash.

It’s also a sign of what is to come if the Monster in the Mission moves forward. Already, investors are eying property in the area: “It took the Valencia Street gentrifiers a while to get the claws in this part of the Mission, but it’s starting to happen,” Boden said.

One of the big problems with projects like the Monster is that they drive up property values in the surrounding areas. Even the prospect of the area gentrifying is making it possible for the owner to ask for such a stunning amount of money for a building with only 33,000 square feet of rentable space. Just to cover the mortgage on a $20 million note, the rent would have to go up to almost $40 a square foot – at least ten times what current tenants are paying. Nothing in the North Mission now rents for that much; any buyer would clearly be expecting massive demographic changes in the area.