The New York Times devoted its entire Sunday Review section this week to an analysis of the future of cities. It’s a critical topic: Cities have been for millenia the drivers of economic, cultural and scientific advances. It’s hard to imagine human civilization without cities.

And yet, in the COVID era, people are wondering: Does the density that makes cities work also put people at risk? Will big companies that once thought human interaction in the workplace was central and who were willing to pay high prices for urban office space now decide that it’s just fine for most people to work from home?

Will high-paid tech workers decide there’s no reason to stay in places like San Francisco when they can pay for less for housing somewhere else?

I’m not sure that some degree of telecommuting is a bad thing, and I won’t be sad if housing prices fall in San Francisco because Twitter no longer requires its staff to show up at the office on Market Street that the city gave the corporation a huge tax break to attract.

In the end, though, this crisis will pass, a vaccine will be developed, and people will again go to bars and cafes and dance clubs and libraries and museums and restaurants and poetry readings – and people who want to be a part of that culture will still want to be in cities.

The economies of cities may be very different. For decades, San Francisco has catered to office culture – to the idea that more office space means a better economy. That, I think, was never really true (if you believe that an economy needs to serve people, and that too much office space and too little housing makes for bad economic outcomes).

But there’s a good chance that the city leaders, from Dianne Feinstein to London Breed, who have bought into this theory of growth will have to acknowledge that its time has passed, that traditional offices may never be the same and that the heart of urban economic development may have to take a very different turn.

This particular crisis is medical, but cities have been facing serious problems for much longer. As the Times notes:

American cities were the hammering engines of the nation’s economic progress, the showcases of its wealth and culture, the objects of global fascination, admiration and aspiration. They were also deformed by racism, bled by the profiteering of elites and fouled by pollution and disease. But in their best moments, they offered the chance to slip the bonds of prejudices, second-guessing and limited horizons. They offered opportunity.

Then, cities worked. Now, they don’t.

I would argue that cities “deformed by racism, bled by the profiteering of elites and fouled by pollution and disease,” didn’t exactly work then, either. Never mind; that’s not the point.

The Times did a great job talking about the history of problems in cities, some of which very much exist today. (The paper still falls into the trap of saying that more market-rate housing will help the housing crisis, but that’s The New York Times, which has always been a neo-liberal publication.)

What the entire series is missing – other than this brilliant piece by my friend and former colleague Annalee Newitz – is simple:

There’s no mention of Jeff Bezos.

No mention of Bill Gates, either, or Mike Bloomberg, or Warren Buffett, or Mark Zuckerberg, or Larry Page, or Sergey Brin.

No mention of the fact that San Francisco has at least 75 billionaires (and that’s a stunning bit of data) – and the city’s voluntary COVID charitable relief fund has less than $30 million in it.

San Francisco is going to face a major budget deficit this year – maybe as high as $1.7 billion. That’s a lot of money.

But actually, it’s not.

If we assume that the average wealth of the 75 billionaires is just $2 billion – and that’s very low – we are talking about a handful of people sitting on $150 billion, just in this city. A wealth tax of just one percent – a penny on the dollar – would solve the city’s entire budget deficit, and not one of these rich people would miss that money.

There’s nothing any of them could possibly want that they would lose if property taxes in the city included this type of wealth.

They clearly aren’t going to volunteer to chip in. So we have to talk about taxes.

California has about 165 people worth a billion or more. Same calculus, that’s $330 billion. A ten percent wealth tax (even just a one-time tax) would raise enough to cover most of the state’s budget deficit. A two-percent wealth tax over five years would do the same thing. And again, none of these people would miss a single meal, or a single new yacht, or a single new mansion.

They would all still be really, really rich, so rich that their grandkids will never have to work.

While homeless people are dying in the streets and families are going hungry and the state is looking at massive cuts to the public schools.

The ten richest people in the United States today have a combined net wealth of more than $700 billion. That’s just ten people. There are about 650 people in the US today worth more than $1 billion; their combined wealth is about $3 trillion.

There are a lot of zeros in this math, but if I have it right, ten percent of that is $300 billion, enough to make a huge impact on federal spending right now. And that’s just 650 people.

The top one percent of US society holds about $25 trillion in wealth. Again, do the math – a tiny wealth tax would solve the state, federal, and local deficits and put the economy back on track during this crisis.

There is really no intellectually honest or logical way to talk about the “recovery” and the future of cities without talking about these numbers.

Jeff Bezos makes about $4 million an hour right now, maybe more. The billionaires pay less income taxes than the rest of us. Even a modest increase in the income taxes on the top one percent would radically change the financial position of cities, states, and the federal government.

As we head into what could be a massive recession, with tens of millions of people unemployed, and cities and states facing insurmountable financial problems, we need to talk about this.

AOC made fun of Bill Gates suggesting a philanthropic fund that rich people could pay into to help COVID victims: 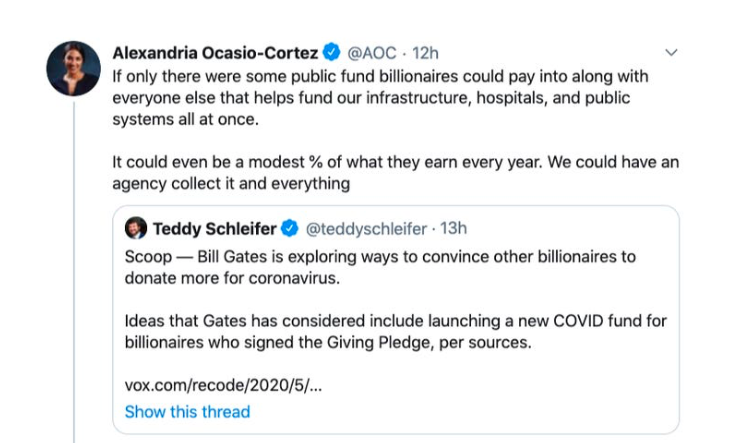 In fact, there shouldn’t be any discussion of deficits, service cuts, cuts to education, or anything else to do with state or local budgets the doesn’t start with a discussion of how the very, very rich need to pay more.

The concept is not that difficult: California, like most states, collects taxes on property, but it’s mostly limited to real estate. Just change state law to allow local assessors to include stock wealth, bond wealth, and other sorts of investments in the definition of taxable “property.” And then exempt the first, say, $20 million. Or $50 million. Pick a number. So we wouldn’t even be taxing the rich, just the insanely rich.

Prop. 13 limits property taxes to one percent a year. I have always been in favor of repealing Prop. 13, but for the moment, I can live with that; tax all insane wealth at one percent a year (meaning Larry Ellison pays about $500 million a year) and this state and its cities are going to be in far better shape.

Many will be way better off, and nobody will suffer.

That ought to be the future of cities. And if The New York Times can’t get its collective head around that, the editors and writers are just wasting their collective time.