Does private zoning trump public zoning? Do we care? 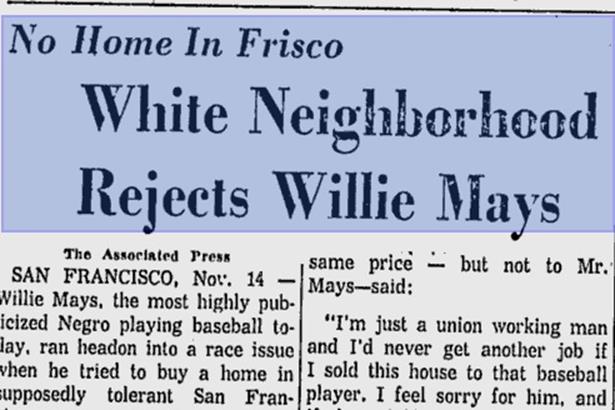 You don’t hear much about Covenants, Conditions and Restrictions in San Francisco these days. The “CC&Rs,” as they are called, are private land-use agreements, and are a creature of the last century, mostly the time right before and after World War II. They don’t really come into play in city planning that much.

But now they’re a real issue in a controversy over in-law units, and it’s worth a moment to talk about what these agreements are, how they work – and if, in fact, they amount to private zoning that trumps public land-use planning.

I know: Wonky. But think about this:

There was a time when private zoning laws were used to keep anyone except white Protestants out of certain neighborhoods. Willie Mays once had trouble buying a house near St. Francis Wood because of his race  (although the seller didn’t cite a specific CC&R). And now private zoning laws might be able to block in-law units from places where the city says they ought to be legal.

CC&Rs go way back in history, but they became popular when suburbs emerged as a major housing trend in America. In essence, they are private agreements that developers crafted to protect the exclusiveness of their new planned communities, and people have to sign them when they move into certain neighborhoods. They are attached to the property deed, and are binding on all future owners. (There’s an interesting, if biased, history here from someone who appears to hate all such developments.)

In some ways, they’re pretty benign: They might mandate, for example, that everyone in a certain neighborhood chip in money to maintain common spaces like parks and clubhouses. They often limit the type of structures, bar commercial enterprises, and contain design-review requirements for renovations. The racial restrictions (while some still remain on the books) have been outlawed by the courts for decades.

Some of the rules are almost silly, since they were written a long time ago. For example, if you live in Westwood Highlands, on the southwest slope of Mt. Davidson, you have to abide by the following:

There shall never at any time be erected, permitted, maintained or carried on upon said property, any place for the manufacture or sale of malt, vinous or spirituous liquor, any foundry, blacksmith shop, bakery, or manufactory of any kind, undertaking establishment, crematory, hospital, clinic, dispensary, sanitarium, asylum or institution of like or kindred nature, any place of public resort, any cattle yard, dog kennels, slaughter house, hog-pen, any stable of any kind, any public garage, or repair shop, any carpet-beating plant, dyeing or cleaning works, tannery or public laundry, or school for the teaching of wind instruments, nor any noxious thing, or noxious trade, or noxious business or use of the property whatsoever; nor shall any cattle, horses, mules, hogs, goats or other live stock or bees be kept, permitted, or maintained upon the said property.

You get the idea – it’s supposed to be a nice residential area, without anyone playing the tuba or beating carpets.

But there are other aspects of these neighborhood agreements, ones that can at times conflict directly with city zoning. Take second units.

The legislation that Sup. David Chiu is sponsoring would allow single-family homes with now-illegal in-law units a chance to come out of the shadows and make those units legal. But even if the city decides to allow this type of (somewhat) affordable housing, you still can’t have one in Westwood Highlands:

There shall not be constructed, erected or maintained on any of the lots shown on said maps any flats, apartment houses, or any store or building used for mercantile or business purposes, nor shall any store or mercantile or other business of any kind be maintained or carried on upon said property, nor shall any building be erected thereon except only residence or dwelling houses, nor shall more than one residence or dwelling be erected on any single lot which shall be designed for use by more than one family, nor shall any of said property be used for any purpose other than residence purposes.

That would seem, among other things, to bar the residents from using airbnb.

But it also says that there are no rentals allowed, and only one family can occupy any particular house. It’s not clear how “family” is defined.

And that, according to the City Attorney’s Office, can supersede local zoning laws. Gabriel Zitrin, a spokesperson for City Attorney Dennis Herrera, told me that the city can set land-use rules, but if private individuals sign private contracts with more restrictive (but not unconstitutional) rules, there’s nothing the city can do about it.

In some ways, I suppose, it’s no different than the model of agricultural land trusts, which buy from farmers the right to develop their land, thus (in the private sector) preventing the expansion of suburbs or other uses that the public sector might allow. Why do we care if some neighborhoods have special deals where people who buy houses there have to agree never to build in-law units or rent their homes to anyone else? In an era when the race-based restrictions are all gone, is there anything wrong with community CC&Rs?

Except that the city is under immense pressure to build more housing, and right now, nearly all of that housing is set to go into neighborhoods on the East Side where existing vulnerable communities face displacement. And the CC&Rs in a lot of (wealthy) western neighborhoods would prevent, for example, any multi-unit affordable housing, meaning that below-market-rate housing has to go somewhere else.

And I am always nervous about developers and private groups setting what is, by almost any standard, public policy – and that’s what land use is.

All the people who talk about change being inevitable, and how the residents of this city have to accept a new order that might undermine its value as a place where a diverse mix of people live … are they willing to talk about CC&Rs and how some parts of the city are (privately) off limits?

Or is it fine if the private sector does it?

Again: I dunno. I’m generally with the neighborhoods when it comes to determining land use. But this is worth talking about, right?

Special sports segment will focus on a five-minute miler in 1958 who was "'too gay' to get his letter -- and an overdue apology 63 years later.
Read more
Education

For now, local funding is the only way to prevent the devastation of one of SF's most important institutions.
Read more
Housing