48 hillsIndependent San Francisco News + Culture
Uncategorized Why consumers – and tenants – should be happy... 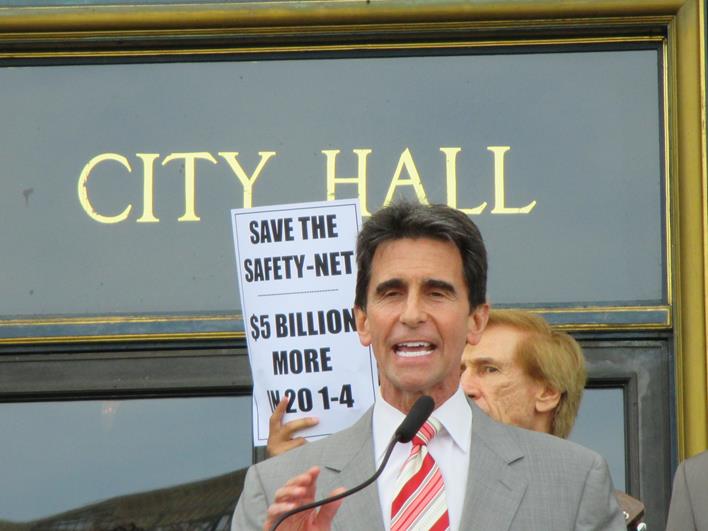 MAY 12, 2014 – The surprise victory of state Sen. Mark Leno, pulling a dead cell-phone safety bill back to life and turning around nearly a quarter of the state Senate in a matter of days, should be celebrated by consumers all over the state — and people like me, who worry that their kids are going to get into a fight or be mugged over a piece of plastic and electronics.

But it’s also a hopeful sign for tenants in San Francisco: Another key Leno bill, to limit Ellis Act evictions, will be on the Senate floor soon – and some of the same dynamics that saved the cell-phone bill will be at play.

Everyone knows the background: The telecom industry spends millions every year on lobbying in Sacramento. These folks don’t want a mandatory kill switch on cell phones because, let’s face it, they make a ton of money selling replacement phones and insurance. The market for cell phones is pretty much at 100 percent saturation in the United States – that’s an economist’s way of saying everyone has one. So the only way you sell new ones and grow the market is to (1) make a better product that’s so much cooler that people are willing to give up their existing, functional, phone for one even better and more expensive, or (2) to replace ones that are stolen, lost, or damaged. Option (1) is expensive; you have to come up with new features and new functionality through research and investment. Option (2) is cheap; you already have the stuff on hand, you just sell it to the poor fool like me who dropped his phone on the cement floor in the basement headquarters of 48hills.org and shattered the screen so it didn’t work any more – or the millions of people who have been kicked, punched, slapped, knocked over, and in some cases, stabbed and beaten by thieves who can quickly turn those stolen phones into cash.

So the first time Leno got his bill to the Senate floor, it lost, 19-17. That’s two votes short. All the Republicans voted against the bill, but so did a lot of Democrats.

Then something remarkable happened. The news media, the blogs – and the people of California – called foul. In a major way.

Remember: Leland Yee is still very much in everyone’s memory. So are Ron Calderon and Roderick Wright. The state Senate’s reputation for ethical standards is not at its best. And Leno was not afraid to say that the reason his bill went down was the influence of a few major money players in the game.

The SF Chronicle picked up that angle, but more importantly, so did George Skelton, the LA Times columnist, who wrote a nasty column essentially accusing all the Dems who voted against the bill (many in his paper’s back yard) of accepting legal bribery:

So who’s more credible on this issue: Law enforcement, which is trying to deter crime, or the industry making money off the crime?

You’d think the telecommers would realize that by upgrading their products to make them less attractive to thieves, their sales might actually increase.

Here’s what I think: This is another example of legal corruption in Sacramento.

The news went nationwide. NBC Nightly News did a segment. So did Good Morning America. The notion that the telecoms could derail a bill like this made the California Legislature a national embarrassment – enough that Senate President Pro Tem Darrell Steinberg told his members to turn this around.

Meanwhile, the opposition was finding its arguments collapsing. “They realized they had a big problem on their hands,” Leno told me. “They at first said this was unworkable. Then they said they could do it – voluntarily. Which meant it was indeed workable. They were running scared.”

Then add Leno’s acumen and ability to work his house – and the public outrage over a blatant sell-out to corporate interests. “I would never discount that,” Leno said. “There was tremendous public pressure on the legislators.”

So now the bill goes to the Assembly, where the same factors will be in play. Although the Assembly hasn’t had to suspend three members for corruption in the past few months, Democrats who control that house are well aware of the perception that special interests rule the day. I suspect this one will sail through with Dems fearing the wrath of the public and news media. And along the way, the bigger cell-phone companies, like Apple, got the message: this is what people want, it’s going to happen, so get with the program. “Sometimes it just takes the corporate decision-makers a little time,” Leno said.

What’s that have to do with the Ellis Act? Potentially, a lot.

Leno’s bill will soon come to the floor. A similar bill by Assemblymember Tom Ammiano is pending in the other house. In both cases, the measures don’t undermine the original intent of the Ellis Act; they just recognize that the law is being abused by real-estate speculators. Leno’s bill applies only to San Francisco.

So what could a Democrat from another part of the state see wrong with that? Exactly one thing: The real-estate industry, which is almost as powerful in Sacramento as telecomm, hates the idea.

But the precedent of public anger at Sacramento corruption helping pass progressive legislation is already established. If tenants can rally supporters (and not just renters) around the state to remind Democrats that they will be watching the votes, and following the campaign money, and turning Ellis Act reform into Kill Switches, Act Two … well, there’s hope.

It’s not easy, it’s never easy, and the District Attorney’s Association won’t be there on the Elllis Act bill – but nobody wants to be seen as a pawn for the big donors right now. And there is no opposition to the Ammiano and Leno bills except the big real-estate interests. I’m not counting Ellis reform out.

... plus saving the SIP hotels, cracking down on serial permit scofflaws, and more problems with private prisons. That's The Agenda for Feb. 22-28
Read more
Housing

With federal and local money, taking over hotels would cost a fraction of the price of building affordable housing.
Read more