By Tim Redmond
October 27, 2014
Share on FacebookShare on TwitterShare on LinkedInShare on RedditShare on Email 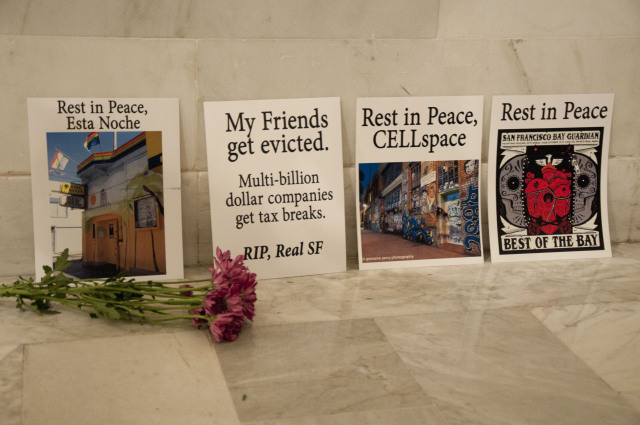 OCTOBER 27, 2014 –Mayor Ed Lee held a press conference in his City Hall office today to mark the signing of legislation regulating short-term rentals – and the sound of chanting could be heard from the other side of closed double doors.

A group of protesters had gathered just outside to create an altar with brightly colored carnations, candles, black-and-white photos of San Francisco landmarks, and signs mourning the loss of neighborhoods and cultural institutions.

Temprano said the protesters viewed the final Airbnb legislation as a sign of having sold out. “The mayor and [Sup.] David Chiu left $25 million in back taxes owed by AirBnb on the table, at a time when our city has critical services that we need to fund,” Temprano (who writes a column for this publication) said in an interview with 48 Hills.

Speaking a short while later to several reporters, he added, “It’s not a coincidence that the mayor and David Chiu are leaving that money on the table,” in reference to campaign contributions from Silicon Valley venture capitalist and Airbnb investor Rob Conway. “Pay-to-play politics in San Francisco is egregious. This legislation is killing our neighborhoods.”

Short-term residential rentals were technically illegal until this legislation was crafted, while unpaid back taxes are estimated to total some $25 million. Sup. David Campos proposed an amendment to collect the unpaid taxes before the Short-Term Residential Rentals Ordinance could take effect when it came up for a vote at the Board of Supervisors. But the amendment was shot down by a 6-5 vote.

“This is the death of a lot of neighborhoods,” said Hene Kelly, who was there on behalf of United Educators of San Francisco. “This is the end for a lot of young people who want to raise their children in San Francisco. If they had at least … taken that amendment, we could have … gotten some housing built. We could have gotten ambulances to get into the neighborhood when they’re needed. But we didn’t do that. We let it go by.”

In a recent op-ed in the San Francisco Chronicle, Sen. Dianne Feinstein called the proposal to collect unpaid back taxes a “commonsense amendment,” sharply criticizing the Airbnb legislation as a threat to the city’s character. “Those of us who value the residential character of our neighborhoods … will see all of this washed away by a blanket commercialization of our neighborhoods,” wrote Feinstein, who’s not exactly known for her radical sentiments.

Inside the Mayor’s Office at the signing ceremony, meanwhile, the mood was celebratory. Chiu and Lee, surrounded by supporters and members of the board, conveyed the message that a long and arduous process had finally produced a successful result that everyone could be happy with.

“I want to thank everyone behind me, and San Francisco, thank you for sharing,” Chiu said, prompting applause. After describing the variety of organizations he’d worked with to craft the legislation including tenant organizations, landlord representatives, small property owners, labor, and the hotel and tourism community, Chiu said: “I want to take a moment and thank an individual who is not with us today. Ted Gullicksen was one of the very first leaders of the tenants’ community that we worked with over a year and a half ago. He stood with me when we introduced this legislation in April, and I know he is here in spirit.”

But among those gathered on the other side of the door to protest the final outcome of the Airbnb legislation were some close allies of Gullicksen – a highly respected progressive tenant advocate who died Oct. 14. The sound of chanting arose as an Airbnb home sharer was describing how much he’d benefited from the service, but the noise quickly died down.

“We were told that we would have to quiet down,” protester Andy Blue explained a few minutes later. “Or it would be an unlawful assembly. So we have to use our inside voices.”

Previous articleCity Beat: Why did the mayor endorse Chiu (after waiting this long)?
Next articleCity College trial opens with dramatic admission

Join us to discuss a community-based agenda for economic, racial, and climate justice in the San Francisco of the future.
Read more
Food & Drink

Plus: A drink trend to challenge boring boba and a new Palestinian-American restaurant is ready to roll
Read more
Movies