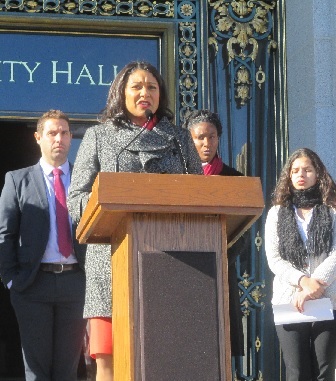 By Tim Redmond
December 15, 2015
Share on FacebookShare on TwitterShare on LinkedInShare on RedditShare on Email

DECEMBER 16, 2015 – In a remarkable move that reflects both changes on the Board of Supervisors and a different political climate as we head into 2016, the supes Tuesday unanimously rejected plans for a new city jail.

Mayor Ed Lee and the incoming sheriff he supported, Vicky Hennessy, both strongly backed the idea of building a $215 million facility to house more than 300 inmates on a piece of land near the Hall of Justice.

That 1958 building is seismically unsafe and falling apart, and needs to be torn down.

But the supes decided that the city would do better to spend that kind of money on mental health services, education, and drug treatment.

The message that the vote sends is profound: A major California city, given the option of taking $80 million in state money for a jail, instead said that alternatives to incarceration and the prison-industrial complex are better for the taxpayers and for public safety.

The vote wasn’t everything that jail foes had wanted: Sup. David Campos, among others, had urged that the board outright reject the $80 million grant the state had offered for the facility.

Instead, in a deal sponsored by Sups. Jane Kim and London Breed, the board agreed to table that item – potentially allowing it to come back at a future date, if the state Legislature decides that the city can spend the grant on something other than a jail.

But the sentiment was clear: “By tabling this item today, we are sending a very clear message that any effort to build a new jail will not come out of this body,” Sup. David Campos said. “We are not going to let that happen.”

The debate was historic: Every speaker agreed that the current system of incarceration was a failure. The vast majority of inmates in the county jail system either have substance abuse or mental-health issues or are being held because they can’t afford bail.

In one case that Kim described, a person arrested on charges of theft was held for 300 days, losing his apartment, his car, and custody of his child, before the charges were dismissed.

The outcome reflected months of organizing by criminal-justice reform advocates, led by groups like Critical Resistance and activists like Roma Guy, a longtime health educator and community leader who devoted hundreds of hours to working against the jail plan.

Campos organized a press event Monday that made it clear any attempt at approving a jail would face long odds.

The board agreed to set aside money to buy lots near the decrepit Hall, which could be used for new space for the District Attorney’s Office, the courts, and potentially a facility that focuses on drug or mental-health treatment.

The motion that Breed made sends most of the issues back to committee and directs the sheriff and the Department of Public Health to create a task force to report back in February on alternatives to a new jail.

It also sets aside a modest amount of the money that would have been allocated for the lockup to pay to buy the property.

The danger, of course, is that despite the vote today, the money for a jail is still on the table, and we could see an effort to bring back a smaller facility in the new space.

If the board had outright rejected it, that cash would have gone back to Sacramento and been reallocated to another county. It’s possible the Sen. Mark Leno will find a way to convince his colleagues that San Francisco should be allowed to use money earmarked for jails to build something different. It’s possible that the Legislature, not a bastion of liberal thought, will refuse to change those rules.

In which case the matter will come back to the board and the mayor and the sheriff could make another attempt.

So in some ways this was a compromise that avoided completely killing any chance of a new jail. Sup. Scott Wiener made it clear that he was a bit reluctant to go along: “We have a real crime problem in San Francisco, and we need to make sure that if we reduce the number of jail beds, we have real alternatives,” he said.

But with a progressive majority on the board, the fate of the jail was dubious anyway, and with the mayor’s popularity sinking fast, there wasn’t much political clout behind the proposal.

What we saw Tuesday was a sign of what the next year might bring: While Sup. Aaron Peskin spoke only briefly, his influence on the outcome was clear. He was potentially the sixth vote against the jail, and everyone knew it, and in the end, a deal that everyone (some more happily than others) could live with won the day.

There are good deals and bad deals, and we may see some of both, but this week it became clear that the center of policy discussion for 2016 won’t be the Mayor’s Office. It will be the Board of Supervisors.

Previous articleBIG WEEK: The top 10+ things to do Wed/16-Sun/20
Next articleDrawing the Crisis: Kseniia Zhuravskaia and Chee Min Lo on the eviction epidemic