A crowd rallied on the steps of the Hall of Justice today to denounce District Attorney George Gascon’s decision not to file charges against the officers involved in two police killings.

After the mother of Mario Woods and the brother of Luis Gongora Pat made impassioned speeches – Woods saying that the decision felt as if her son had been killed all over again – Public Defender Jeff Adachi called Gascon’s decision “horrifying and outrageous.

“The DA says this is a clear-cut case of self-defense,” Adachi said. “But self-defense only applies when you act reasonably.”

He said that Gascon’s staff asked the cops if they were afraid and needed to defend themselves, and they said yes. “Can you imagine if everyone who said they acted in self-defense took a walk?” Adachi asked.

Gascon’s decision not to file charges against the officers who killed Woods and Gongora Pat made national news – as it should. The lack of criminal charges means that the officers involved with all be back on the streets, armed, with no apparent disciplinary action against them.

They killed Mario Woods and Luis Gongora Pat with impunity.

There is so much wrong with this I don’t know where to start – so let’s start with this:

According to Adachi, no police officer in modern history has been charged with a crime after shooting and killing a suspect in San Francisco:

In both the Woods and Gongora killings, officers were not in immediate danger when they fired their weapons. The San Francisco District Attorney’s decision not to prosecute any officer on any charge is mindboggling and fails to hold police to the same laws we, as citizens, are expected to abide. To date, not a single officer in San Francisco has ever been criminally charged as the result of shooting a citizen, yet citizens are charged with crimes every day despite prosecutors being unable to prove their guilt beyond a reasonable doubt. It is clear prosecutors are using a different standard in judging police officers’ conduct.  The reforms proposed by the Department of Justice’s review are empty promises without officer accountability.

Oh, and I read the reports on the investigation; it took more than two years, with a new team of well-paid staff, to do this?

Gascon declined to talk to me. But Max Szabo, his spokesperson, said that the DA would have had to charge the officers with murder, and the legal standard for that is too high.

I talked to John Burris, attorney for both families, at the event, and he told me that murder wasn’t the only option. “If you kill somebody and you say at the time that it was the only option, but it turns out that you were wrong, that whatever your intentions you made a mistake and somebody died, that’s the definition of manslaughter,” he said.

Burris said he was going to ask the state attorney general to look into the case. There are two civil suits going on.

And as Adachi pointed out, the standard for murder clearly wasn’t that high when Gascon charged Jose Ines Garcia Zarate with murder in a case where the evidence was, at best, weak and the charges, at best, a stretch.

There’s a reason so many activists have been focused on the DA and pushing for him to file charges: Gascon is an elected official, he operates (at least a little bit) in public – and he is apparently the last and only person who has any ability to hold cops accountable.

Which is a problem.

Sure, it’s hard to prove in court that a police officer acted beyond what a “reasonable” officer would do in that situation. It’s hard to send a cop to prison.

But firing an officer doesn’t require a murder charge.

San Francisco has clear standards and training on de-escalation. In both of these cases, there’s a strong argument to be made that the cops violated the department’s rules. And two people died.

As far as anyone knows, not one officer has been disciplined, much less dismissed. The Chron reports that they are looking forward, after a period of paid leave and desk duty, to going back out on the streets.

Now the Police Officers Association says the cops have been “vindicated.”

Not true: The officers aren’t facing jail time, but that in no way means they acted that way police officers are supposed to act in San Francisco.

“The standard for holding a police officer accountable for killing someone as an employment issue is very different from the standard for getting a criminal conviction,” John Crew, a longtime police accountability lawyer, told me. “The fact that an officer isn’t convicted of a crime doesn’t mean they have the right to carry and gun and stay on the job. That’s not the standard we should use in San Francisco.”

But it’s been the standard in police shootings for decades.

Suzy Loftus, former president of the Police Commission, who has announced she will challenge Gascon in 2019, told me that after the Woods shooting, the commission began a process to update the 20-year-old rules for use of force. That process took a while, in part because the POA demanded the right to “meet and confer” on the changes, then sued the city over them. In the meantime, Gongora Pat was killed.

But Crew argues – and if you watch the video and follow the evidence, you get the point – that even under the rules in place at the time, the officers should have faced at least some level of accountability. When that didn’t happen – when Chief Suhr and the Police Commission failed to take action – the demands shifted to Gascon.

Gascon at least supports a change in state law, AB 931, that would make it easier to prosecute killer cops – and he’s the only DA in the state who does. He’s facing a challenge in 2019 from two candidates who are going to run to his right – Loftus and Joe Alioto Veronese.

Veronese wouldn’t comment on whether charges should have been filed in this case, saying “I haven’t seen all the evidence.” Actually, at this point all the evidence – or enough to make a decision – is public. The video of the Woods case alone is pretty clear evidence; the cops statements are all in the DA’s report.

But he accused Gascon of “acting like a public defender,” which in my mind is a complement for a DA.

Loftus also declined to say whether she would have filed charges: “I’ll let George Gascon defend that decision.” She said she doesn’t know if she supports AB 931 since she hasn’t read it. (She’s currently a lawyer in the Sheriff’s Office, and running for DA. She’s a former head of the Police Commission. This bill is hardly a secret.) 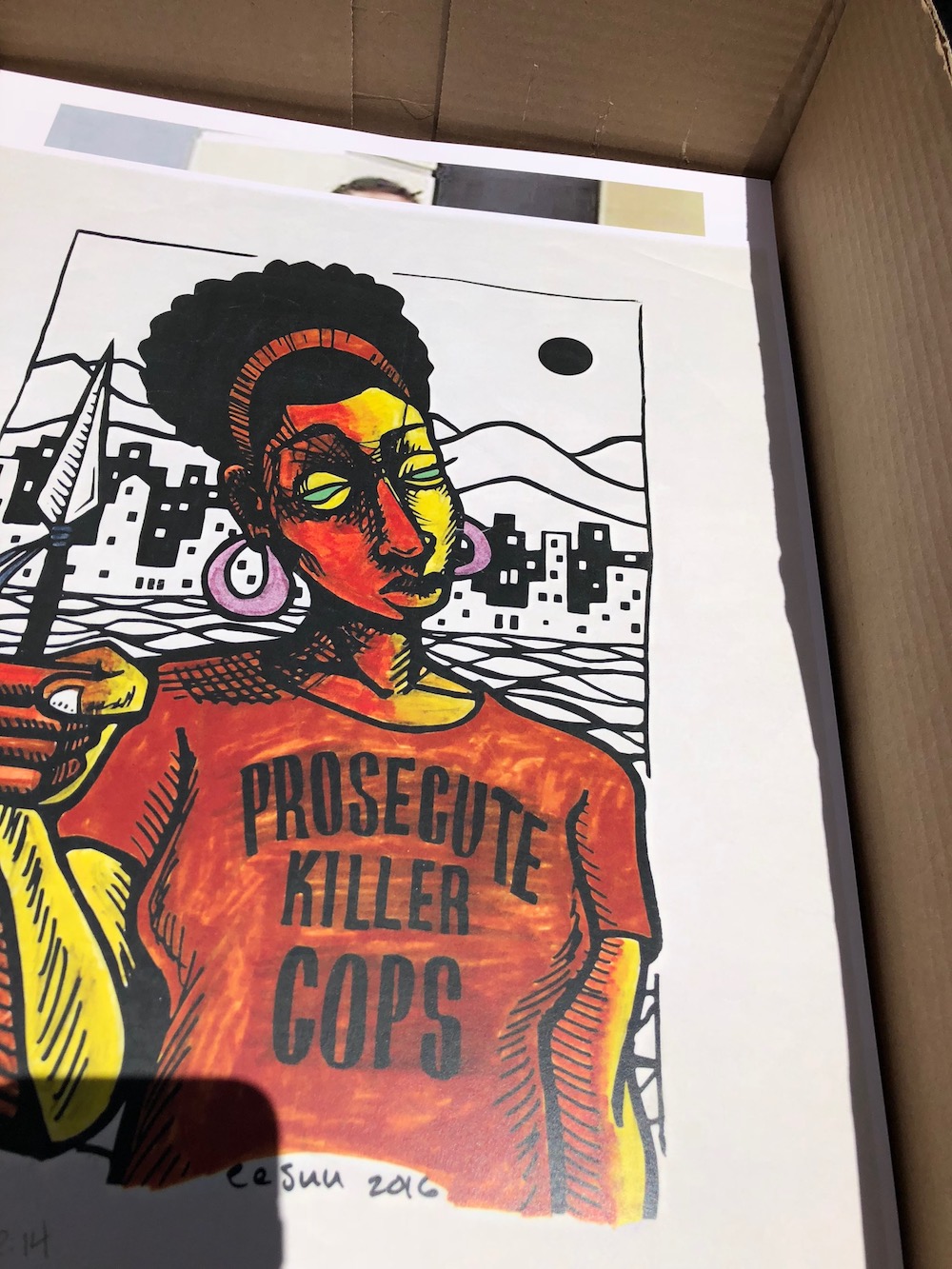 Why is there so little accountability in the Police Department?

One reason: Most of the SFPD management, the ones who are supposed to keep things under control, are members of the POA. All the way up to captain. The infrastructure that exists to hold cops accountable is part of the same organization that exists to prevent cops from being held accountable.

Another: It’s been a long time since we’ve had a director of what is now the Department of Police Accountability who is willing to push the envelope and demand serious discipline – and a mayor and a Police Commission willing to defy the POA and support that position.

So we wind up with the only possible accountable public official – the DA – as the only one who can discipline killer cops. And he has declined to do it.

At the rally today, we heard chants of “Gascon has got to go.” Several speakers said that San Francisco needs a new DA.

So Gascon, who in some cases has taken progressive stands and is not a friend of the POA, has just alienated a significant segment of the progressive community. That’s an opening for his challengers.

At this point, there’s nobody running for DA from Gascon’s left, nobody who is offering to reform the cash-bail system or hold police officers accountable.

We haven’t heard real platforms from Loftus or Veronese yet. The election is still a year and a half away.

Both said the investigation took too long – which it did – but that was as far as they would go.

So where do the progressives go in 2019? Tough question.