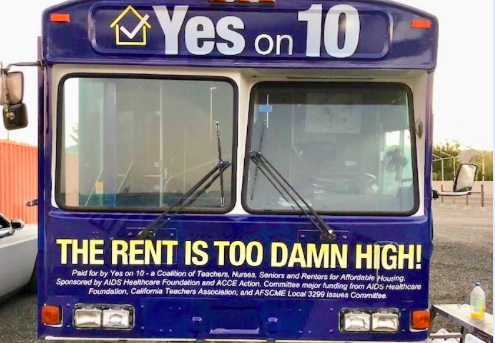 All 11 supervisors will have to take a public stand Tuesday/2 on Proposition 10, the statewide ballot measure that would allow cities to impose effective rent control. Sup. Aaron Peskin has sponsored a resolution in support of the measure; it could have gone through two weeks ago, but Sup. Malia Cohen insisted it be sent to committee first, saying she wasn’t sure about the impacts on homeowners in her district. (There are no impacts on homeowners, just on landlords and tenants.) The Land Use and Transportation Committee heard the measure and sent it back to the full board – with an amendment that states that San Francisco has no plans to extend rent control without an economic analysis by the city controller. Sups. Ahsha Safai and Katy Tang were concerned about rent controls on single-family homes.

This is one of the two most important issues on the November ballot (SF Proposition C is the other).  And we will get a chance to see where every member of the board actually stands on tenant rights.

The board will also hear an appeal of the Environmental Impact Report on a big project in India Basin that would allow for 1,500 new residential units and 15 acres of parkland in an old industrial area that may still have toxic materials buried in the soil.

A lot of the news media coverage of the issue has focused on the future of a popular Russian spa near the site.

But Greenaction, an environmental justice group, appealed the EIR, saying that the project would cause increased air pollution in an area that already has the worst air quality (and highest rates of respiratory disease) in the city. The EIR admits there are environmental problems that can’t be entirely mitigated, but the Planning Commission decided that the city’s need for housing is so important that it overrides the potential downsides.

Tony Kelly, a candidate for D10 supervisor, told me that

I’ve been around a while, but it’s still a shock that, in San Francisco in 2018, the city might approve a building project next to the Shipyard that hasn’t really considered how safe the dirt is, has environmental impacts that can’t be mitigated, and deliberately avoided communities that don’t speak or read English. And the official reason the city might approve the project anyway is, they want the money and the expensive housing. If this gets approved, how wrong does a project have to be to get rejected?

The hearing will start sometime after 3pm.

The Planning Commission will, after months of delay, hear a proposal Thursday/4 to build a Whole Foods store on Jackson, between Polk and Van Ness, the site of the old Lombardi Sports. Neighbors have argued that the site is too valuable just for a two-story grocery store and that the project should also include housing.

The commission sent the plans back to the developer and asked for an alternative that included housing – but the developer now says that’s pretty much not going to happen. The existing building isn’t capable of handling the weight of several more stories on top, according to a report by the engineering firm Santos and Urrutia, which the city is suing for allegedly violating building codes.

So, the developer says, the building would have to be torn down and rebuilt, which this owner has no desire to do. Otherwise: No housing, just Whole Foods.

Several commissioners have been dubious about this project from the start. Let’s see how they handle the latest.

Also Thursday/4:Legal Assistance to the Elderly holds its annual party and fundraiser at Johnny Foley’s Irish Pub. Fell disclosure, I serve on the board of this organization – so I can vouch for the fact that it does amazing work protecting one of the city’s most vulnerable populations, low-income seniors and disabled people. It’s $25 at the door. 5pm to 7:30 pm, 243 O’Farrell.