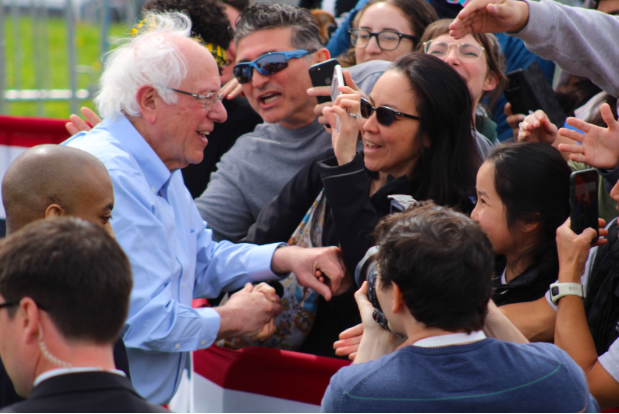 Adults, teens, children and their pets gathered in Green Meadow Park near Fort Mason on a sunny Sunday afternoon March 24. Sen. Bernie Sanders greeted thousands of supporters as they stood in rows between the barricades and squished together behind railing in the park.

Excitement spread across the crowd as musicians and politicians took to the stage.

Singer Sarah Lee Guthrie was there with her guitar to sing songs from her grandfather, Woody Guthrie: “I’ve Got to Know” and “This Land is Your Land.”

“I’m here because I support Bernie Sanders for president,” she said. “Bernie Sanders is one of my heroes for fighting all that time and being so consistent… I love the fact that Bernie fights so hard for workers’ rights.”

The Grammy-award winning group Tony Tony Tony also took the stage, followed by Democratic Party Chair David Campos, who said he would be voting for Sanders. Campos talked about his family’s risk to get to the US and their search for the American Dream.

“We came here because we believe this is still a country of immigrants… I am here today in behalf of all undocumented kid who like me risk their lives to say, ‘This is our country as much as anyone’s.’ I am here because I still believe in the American Dream.. But that’s a dream that’s in peril. It’s no longer a reality for so many kids of country,” Campos said.

“[I attended today] because I plan to vote for Bernie Sanders,” she said. “I wasn’t able to vote in the last election, and I also wanted to show my dad. [It’s important for young people to attend events like this] so they can get informed and get educated. A lot of my friends who are now able to vote don’t know or care, even though they have the privilege to vote.”

“We need to make sure healthcare access is available to all. It’s about justice, it’s about doing the right thing,” Canepa said.  [In california, we know the effects of global warming]. If we don’t think global warming is the cause, we’re lying to ourselves. This is our time, our time to stand up. Make no mistake. It’s not one individual but all of us working collectively together. That’s what we need to elect Bernie Sanders.”

Claire Lau, a founder of SF Berniecrats, explained how she marched for democracy throughout her childhood and early adulthood, but it wasn’t until Sanders announced his candidacy in 2015 that she became an organizer. Between the last election and now, there were so many volunteers with so much energy that they couldn’t let the organizing stop, she said. Lau explained all the important topics they fight for, such as immigration and rights for Latinos and the African-American community.

“Why? All inspired by Bernie Sanders over 40 year-commitment to these issues before they were popular. We’re here not just for Bernie as one person, we fight for justice for all of us here,” Lau said.

Tom Ammiano, former member of the SF Board of Supervisors and state Assembly, said he supports Sanders because he discusses important issues, such as addressing the disabled community, who deserve a “seat at the table.”

“I wanna welcome Bernie to the Emerald City. We are gonna follow that fucking yellow brick road right to the White House.”

California Representative Ro Khanna took to the stage soon after to advocate for the important of universal healthcare.

“The current system is not affordable… It’s about freedom, it’s about the freedom on an entrepreneur to start her own business without worrying about not having healthcare. It’s about the freedom of a mother to look after a sick child without fear that the hospital bills will keep piling up. For those that believe in the constitution, medicare for all gives the pursuit of happiness meaning,” Khanna said.

One of the topics that Sanders has heavily advocated for is a $15 minimum wage. When Sanders is president, Khanna said, he’ll fight for a $15 minimum wage at Walmart, Burger King and every Fortune 500 company in the country. Khanna also addressed Sanders’ concerns over military interventionism and the four-year anniversary of the end of the war in Yemen.

“What the people want is simple. We want an America where everyone has the opportunity to seize opportunity. People don’t wanna bring up history because they know they can’t hold up to the receipts we’ve got,” she said.

Chris Cortes, 28, said the rally absolutely met his expectations, and he even got to shake Sanders thumb. He looks forward to Sanders taking on Wall Street and re-shaping the middle class.

“I feel like Bernie Sanders is our best chance to beat Donald Trump and get the most progressive candidate, arguably since FDR. He’s a once in a lifetime candidate,” Cortes said.

Sanders was met with loud cheers as he greeted the crowd, the Golden Gate Bridge towering behind him and US and California flags blowing in the wind. An abundance of blue and white “Sanders 2020 signs” were sprinkled across the audience.

“San Francisco, thank you… I’m delighted to be here in California and I want to say, based off the incredible crowds I’ve seen, I think we’re going to win California,” Sanders said.

Sanders addressed many of the policies that were pegged as “radical” during his 2016 campaign. These include raising minimum wage, making college free, legalizing cannabis, and guaranteeing healthcare. He also discussesd fighting against climate change, reforming immigration, and changing the criminal justice system.

“As your president I will not have kind things to say about authoritarian leaders around the world who espouse hated and bigotry,” Sanders told the crowd. “Together, we will make the US the leader in the world in the fight for democracy and human rights, in the struggle to bring this world together around our common humanity.”

And, he added, there is something to be learned by New Zealand and what they did after the mosque shooting. They banned assault weapons within three days of the tragedy.

Sanders asked the crowd to stand with him, as he fights to protect family-based agriculture from Vermont, his home state, to California.

Maggi Munat attended the event to help start rallying troops to start working for the Bernie Sanders campaign. Everyone needs to come together to work to get Sanders elected president, she said. This campaign is different than the last one, she explained, as they are starting strong with millions of volunteers and a lot of donations coming in.

“I am going to work my hardest. We’ve got really strong support in Northern California. With his recognition and the support, we’ve been here all along, we’ve got a whole base. We can do it,” Munat said.

Munat said that of the donations coming in for the Sanders campaign, 40 percent are from new people, not from the last campaign’s e-mail list.

Sanders also took a moment to address the young people of today’s generation.

The strength of joining together and not letting President Trump divide people by their skin color, country of origin, sexual orientation and religion, Sanders said, is what motivated him.

“I may not be a great mathematician, but this I do know: They are one percent, we are 99 percent. If we stand together, we can create a country that will be the envy of the world, a country that our kids and grandkids will say ‘thank you mom and dad, thanks grandparents for standing up for justice.”