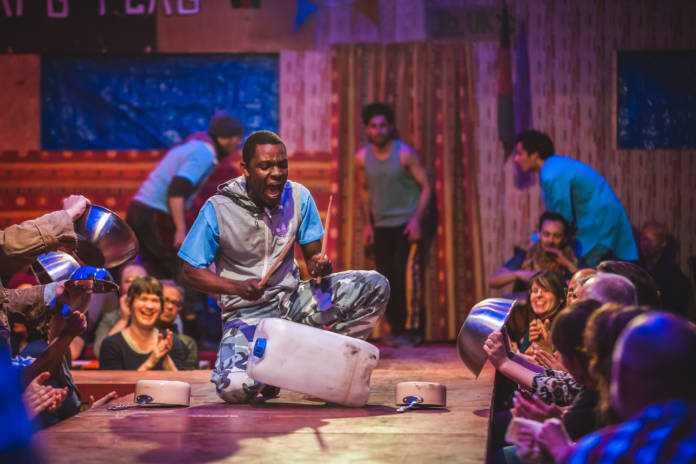 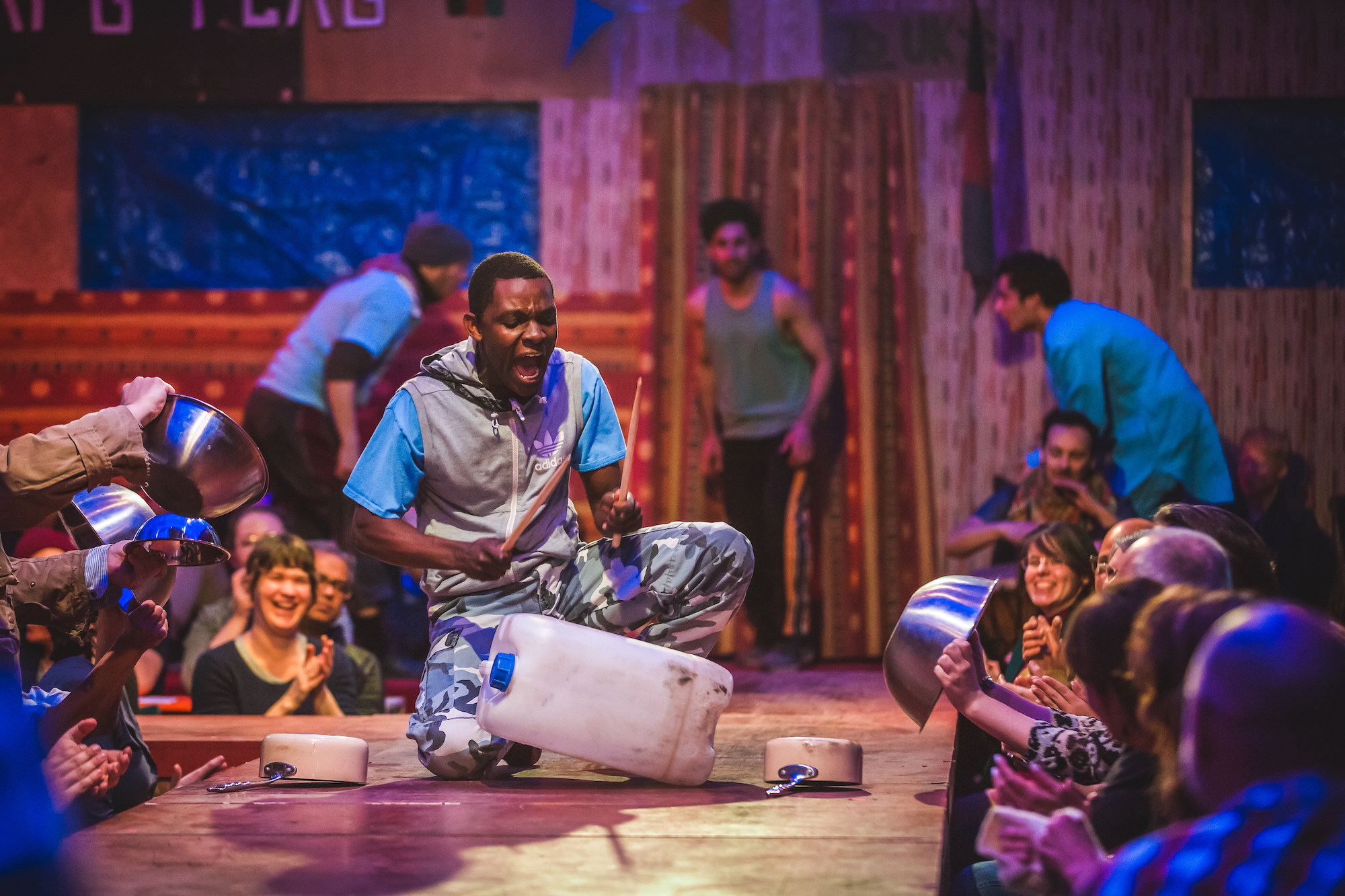 Reviews: News of the real world in ‘The Jungle’ and ‘N—aroo’

The Curran is transformed into a notorious refugee camp, while a performance at the Exit explores the contemporary Black-white divide.

That can be interpreted any number of ways, but The Jungle (through May 19 at the Curran) brings news of the most literal and urgent kind. The Curran has been completely transformed into the notorious refugee camp, founded on a garbage dump in Calais, that in 2015-2016 was home to thousands. The Jungle—an English slip-up of the Pashtun word dzangal, or forest, which the refugees ironically named their desolate home—became a “short-lived, self-sufficient society,” complete with mosques, church, shops, theater, nightclub, and internationally reviewed restaurant.

The immersive play comes here from sensational runs in London and New York, and it surpasses the hype. After most of the audience (get floor seats!) wends its way through a particle board warren of shops, it’s seated on wooden benches in a large replica of that dirt-floored restaurant, overseen by proud, fatherly Afghan Salar (Ben Turner). The bustling cafe is both the nerve center and the heart of The Jungle. Salar serves chai, TVs blare from the corners, cell phones jangle and play tinny music videos, noise from the nearby motorway (where refugees try to smuggle themselves into trucks headed for the UK) creeps in.

Then the lights black out and riot police burst in. We’re plunged into the terrifying action of a “soft eviction,” one of the many preposterously Orwellian terms that spell life or death for this community of people on the run from at least a dozen countries. Almost immediately afterwards a body is carried in, wrapped in a sheet: a victim of a motorway accident, one of the Jungle’s beloved residents. We then jump to several months earlier, to the beginning of a tale whose end we already know, but in the telling reveals the exhilaratingly human complexity of these refugees and their aid workers, the unfathomable trauma at the heart of many of their stories, and the conflict between loving the place one is from while risking everything to flee it.

The ensemble work here is spell-binding. As the Jungle characters—fierce Eritrean Christian Helene (Nahel Tzegai), inscrutable Sudanese teen Okot (John Pumojena), conflicted Syrian scholar Safi (Ammar Has Ahmad), puckish young Afghan Norullah (Khaled Zahabi), six-year-old Little Amal (Arya Rose Lonmor, alternating with Zara Rasti)—face daily disappointment and desperation with ingenuity, we see the racism, nationalist conflict, chauvinism, greed, and personality clashes that come to the fore in a makeshift way-station under constant stress. We also see the gallows humor, wry camaraderie, touching generosity, exuberant cultural expression, and love of a good piece of warm naan in the morning. These refugees are not types; the audacious trick of the Jungle is to make them so human we easily see ourselves in their place, face to face.

The Jungle was written by two British men (with input from the refugees), Joe Robertson and Joe Murphy, who were aid workers in the camp themselves, setting up the Good Chance Theatre Company there. Two of the cast members were Jungle residents, and three had to become UK citizens in order to get around Trump’s travel ban. And what about us in the audience? Aren’t we just engaging in some bourgeois refugee role-play? The playwrights understand this dilemma, and answer it by considering us students, teaching us in direct and subtle ways what really happened on that crowded scrap of land, to people crushed in the gears of geopolitics.

We get actual newscasts and video reports from the site of the Jungle now, where hundreds still languish but where it’s illegal to erect any structures. We learn how to smuggle ourselves in boxes on refrigerator trucks and how to lie in the hold of an overcrowded ship. Conspiracy theories are dispelled onstage, and the timeline of major recent events (so recent that we’ve already forgotten them, as our age dictates) is fleshed out, from the global outcry over drowned baby Alan Kurdi to the terrorist attack on the Bataclan in Paris.

Robertson and Murphy—and directors Stephen Daldry and Justin Martin—brilliantly show how the events that flooded our feeds momentarily affected real humans on the precipice, and how the world bungled the situation. “Your governments don’t care if we wash up on a beach, as long as we’re wearing new clothes” one character says acidly, and decades of neoliberal policy shrink into a corn cob.

Don’t think it’s all didactic declamation, however—a heart-stopping Shakespearean twist at the end reveals the full humanity, and tragedy, of some of the characters. And Roberston and Murphy poke some good fun at themselves by introducing four initially bumbling British aid workers, each drawn to the Jungle for their own reasons, but helping as much as they can. Two of them, 18-year-old Beth (Rachel Redford) and mama bear Paula (Lorraine Bruce) are incredibly driven, and along with Eritrean firecracker Helene’s outspokenness, it’s a rare pleasure to hear women shouting onstage about politics. With its tumult of viewpoints, origins, and motivations onstage, The Jungle feels like the real world.

(If all this doesn’t recommend The Jungle enough, one of my friends who was an aid worker in a kitchen in the camp collapsed in tears into one of the cast members arms after seeing the play, it felt so true to the experience. And another, Matthew DeCoster of Literary Death Match, told me in the lobby that although he had seen both the original productions of Angels in America and Rent—both of whose influence is felt in The Jungle—nothing had prepared him for how affecting this play was.)

One of our best storytellers, Dazié Grego-Sykes, brings different news of the great diaspora in his engaging one-person show N—aroo (through April 27 at Exit Theater). How does a light-skinned Black person exist in the contemporary United States, with its surreal fetishization of African-American culture in service of white supremacy? “It was after being told by people who were darker than me to stay out of the sun that I first wondered, ‘Why wouldn’t a Black person want to be blacker?'” he says in the program, and he runs with that question in some fascinating directions.

Grego-Sykes is a veteran of legendary ensembles like Deep Dickollective, widely acknowledged as the first “out” rap group, and Pomo Afro Homos, who revolutionized theater in the Bay Area in the 1990s. His poise and charisma evince a deep history of performing in spoken word battles and poetry slams: He mesmerizes the audience with a measured, buttery vocal tone even as he addresses one of the most fraught and deadly paradoxes of our country. (N—aroo won the 2017 Best of Fringe award at the Exit’s annual Fringe Festival.)

Alternating polished monologues with familiar but fiery video clips of James Baldwin and Nina Simone speaking on Blackness, Grego-Sykes inhabits several different characters (versions of himself?) to give us a plethora of viewpoints on how Black and white intersect and divide—and especially, how white culture preys on Black culture, and how Black culture becomes more insular and defensive (and thus more enticing to whites) as a result.

As someone who operates in both worlds as an insider and outsider, Grego-Sykes brings word from each —from expounding on how ‘music is the new cotton’ to a truly fantastic riff on why white people bleach their hair—although he’s fully aware that he’s no magical trickster who exists beyond of the advantages and exploitations of US culture as a whole. He knows how to work it, even as he’s held down. The expression of his moral quandaries along the way is what makes the show so poignant.

The stage pictures Grego-Sykes creates for the 55-minute show are minimal and striking (Mona Laughing Brook directs, curtis o. does lights, and Miz Sequoia is the visual collaborator), and when the video clips play you miss him onstage. As for the appropriateness of Grego-Sykes’ use of blackface, it is absolutely not my lane to comment. One of the great lessons of our moment is to just listen—both The Jungle and N—aroo provide amazing opportunities to do this—so here’s Grego-Sykes again: “Within this piece, I employ Black Face as a metaphor for Black performativity in a way that its potency can be manipulated to excite resistance surrounding colorist and internalized racism.”