Activist-author Benjamin Heim Shepard turns to fiction, inspired by working in an SF AIDS housing program in the mid-1990s.

LIT Author Benjamin Heim Shepard is a Brooklyn-based activist who has published 10 books, including White Nights and Ascending Shadows: An Oral History of the San Francisco AIDS Epidemic (1997), From ACT UP to the WTO: Urban Protest and Community Building in the Era of Globalization (2002).

His new book, Illuminations on Market Street, is a turn to fiction. It “traces the story of a young caregiver in San Francisco in the early 1990s. Cab is on the deep end of a losing streak. After having been dumped yet again, he moves to Haight-Ashbury fresh out of college. It is the middle of a recession, before the dot-com boom, and AIDS is an immediate and untreatable reality.

“A story about AIDS and sex, acting up and praying for the dead, this is a story about living and fighting in the face of insurmountable challenges as one writer searches for his own story.”

We spoke with Shepard about his inspirations and history in advance of several Bay Area readings.

48 Hills: You are one of the most prolific scholars of social movement history and theory writing today. What inspired the switch to fiction?

The movements that have inspired me, the magic realist writings of Garcia Marquez and the Riot Grrrl Zines all suggest the blurrings between fiction and non-fiction are more interesting. “Confuse truth with fiction, attempt to de-centralize the manufacturing of the ‘truth’” notes one Riot Grrrl Zine.

Illuminations on Market Street started off as a journal I was writing when I worked in an AIDS housing program in San Francisco in the mid-1990’s, writing about sex and the people I knew, many passing from this life to the next. Those who died or disappeared from my life never quite seemed to leave. They were always around reminding me. Memories everywhere. Reminders everywhere. So I wrote about them, especially during those 12 to 8am graveyard shifts on Market Street, in the quiet hours, in that messy space between my San Francisco history and ghosts. This was a space where we were asked  to live another way.

Alexandra Mikhailovna Kollontai, the Russian revolutionary who wrote The Autobiography of a Sexually Emancipated Communist Woman, said of sexual liberation and revolution: “Nothing is more difficult than writing an autobiography. What should be emphasized? Just what is of general interest? It is advisable, above all, to write honestly and dispense with any of the conventional introductory protestations of modesty. For if one is called upon to tell about one’s life so as to make the events that made it what it became useful to the general public, it can mean only that one must have already wrought something positive in life, accomplished a task that people recognize. …”

Illuminations grapples with similar public and private sentiments. But when people sleep with you or you get to know them before they are dying, they are not giving you permission to write their story. So a few embellishments feel more fitting.

One of my college history professors wrote about living through World War II on the Western Front. I asked about a paper he wrote about it. And said of course it didn’t really happen that way. He was just embellishing a bit. In other words, he never let the truth get between him and a good story. I whole-heartedly concur.

48Hills Are you dismissing the importance of telling truths? That seems a little dangerous in today’s world.

BHS No. But I for one don’t believe in truth with a capital T. That seems more about power. Neither science nor theology are outside the influence of cultural bias or interpretation. No one has a monopoly on the truth.  Instead, all we have are stories to help us interpret and create meaning within a rapidly changing world.  That said, there is science and there is peer review. There is historic evidence. Climate change is real. So are the genocides dictators like deny.

I am talking about stories people tell here. In this case, we can differentiate between questions of narrative truth and historical truth. There is validity to both. With life stories, sometimes we get to a more honest story, a more compelling fiction by liberating ourselves from the restrictions of non-fiction.

48H San Francisco is depicted almost as another character in your book. Do you think that AIDS and displacement has destroyed the connection between today’s city and the 1990s one you write about?

BHS Displacement is a phenomenon taking place all over the world. Cities are always grappling with patterns of migration, community formation, and displacement. This is a story of capital. It is the story of the Brooklyn where I live now and the San Francisco where I once lived. I was trying to write about the people who arrived, the people who came after World War II and never went home, the ‘49ers, the cabaret performers, the Beats, the Hippies, the Gay Liberationists, even the people with AIDS who came from Mexico seeking treatment unavailable elsewhere, all of whom came and created a community. I was not in San Francisco for the displacement years. But that might have been my blind spot. AIDS is not over and neither is displacement. But I don’t think San Francisco is entirely over either.

I have always felt that San Francisco is a place with exquisite never-been-so-lonely beauty. But its place in which I’ve never felt more lonely. I always felt that way living here. I still feel that way decades later.

48H One of the interesting things about your book is that it is almost a book within a book. Cab is possessed to write everything down. What does this plot device allow to say about our memories?

Think of Blanche DuBois. Studs Terkel said during an interview with Tennessee Williams in 1961 at Chicago’s Blackstone Hotel. “Think of Blanche for a minute,” Terkel chimed in. “I’m asking you, the creator, to think of Blanche . . . She represented so many good things too, despite the sham that she seemed to evoke.” “Well, as she said, ‘I don’t tell truth. I tell what ought to be truth.’

She had the courage to admit that she occasionally embellished upon the real facts. And when her back was to the wall, she had courage, truth, and eloquence, I thought,” noted Williams. There is something prophetic in those “ought to be the truths.” To be that’s what San Francisco stories are all about.

Everyone reinvents themselves here. Everyone retells their story here.

48Hills:  Your book joins a long and still growing lineage of work exploring San Francisco’s history and politics. Do you have any particular literary event inspirations for it?

BHS: Living in San Francisco, I was inspired by the AIDS writers, sex positive queer writers, David Feinberg, Patrick Califia. Kathy Acker. Dorothy Allison’s Bastard Out of Carolina, which just came out when I moved to San Francisco in 1992. Pat Conroy, whose daughter was a friend of mine in town, traced a way of moving beyond the South while honestly looking at what happened.

And then the San Francisco writers, Jack London and Armistead Maupin trace ways of finding new stories out in the West. Most of all, Allen Ginsberg and Harold Norse, traced poems about leaving old stories behind, finding new narratives here. My father dropped out of college when he read Howl, moving to join the Beats here. I felt it when I got to San Francisco. 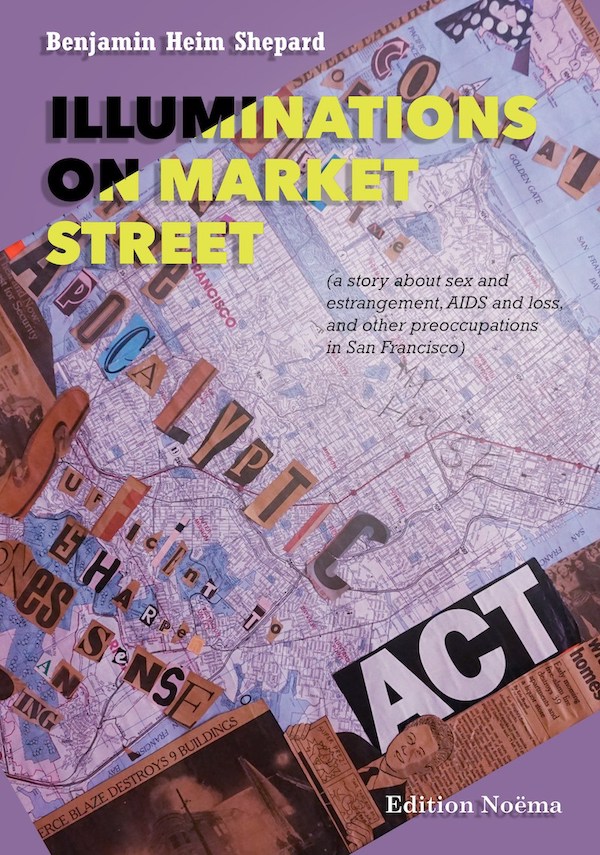 48 Hills: Does San Francisco’s activist scene of the 1990s have anything to teach us today? Or are we just being nostaligic for nothing?

It says there is always a time to fight, care, and get organized. Let’s not let what we can’t do get in the way of what we can. It’s always a good time to fight back and take care of each other. Pray for the dead but fight like hell for the living. Even with a little sartorial spender, a wink, a smile, a little camp, mixed with a bit of anger, as the queer movement has always brought to the process.

Repulsion to Trump is expanding beyond the liberal enclaves.
Read more