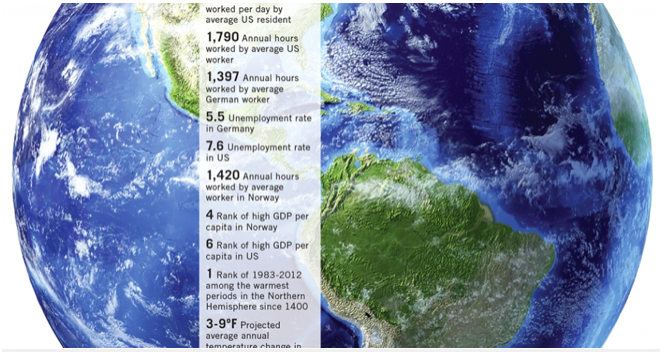 People are dying to get back to work, top Republicans have been saying for the last month, justifying efforts to force the U.S. economy open during the COVID-19 pandemic, even if it kills thousands of people.

They’re right that people are dying, still almost 1,000 Americans a day succumbing to the disease. They’re even right that many people are tired of the public health lockdowns and anxious about their finances and futures.

But what people really want is economic security, to know that they’re going to be okay, not necessarily to work during these tough and uncertain times. They want income, but not necessarily a job.

Maybe that’s a distinction that’s lost on many Americans. From our founding focus on our “Protestant work ethic” to our modern bipartisan political obsession with “jobs, jobs, jobs,” Americans mythologize themselves as hard workers, first and foremost.

Our jobs are often central to our identities. Our jobs provide the roof over our heads, the insurance we need to access health care and the money to buy food and fun. Jobs are everything, as we’ve been led to believe.

Losing our jobs, in this cutthroat capitalist country, is one of the most stressful and destabilizing things that can happen to us. It’s right up there with the death of a loved one. And now, too many are being forced to endure both calamities.

Jobs are meant to provide us with security. Instead, the jobs of “essential workers” like health care providers, food industry workers, journalists and grocery store clerks are the very things placing their lives and livelihoods at risk.

They’re the ones disproportionately dying from this disease, along with poor Black and Brown people forced to breathe our industrial pollution but denied adequate access to what conservatives still perversely call the greatest health care system in the world.

But it’s a lie, all of it, designed to promote a system of wage slavery that works great for the 1 percent, not the rest of us. Over 40 million American jobs were lost in just a couple months and many of them probably aren’t coming back.

Nor should they if we really want to create an economy that works for people and the planet, not just rich Wall Street investors. So it’s time to rethink how we work and the world that our work is creating.

During this economic and public health crisis, I’ve been thinking a lot about two cover stories I wrote for the San Francisco Bay Guardian in the final couple years of its existence.

“Do We Care?” looked at how our economic system devalues caregiving and the movement to pass a Caregivers Bill of Rights in New York and California. “Save the World, Work Less” examined the strangely forgotten belief that productivity gains should translate into shorter workweeks, which would also be an important tool for addressing climate change and environmental degradation.

“Simply put, every hour of work we do cooks the planet and its sensitive ecosystems a little bit more, and going home to relax and enjoy some leisure time is like taking this boiling pot of water off the burner,” I wrote.

Both articles seem more relevant than ever right now. The biggest economic collapse since the Great Depression gives us an opportunity to rebuild our economy is a more solid and sustainable way.  One where our “jobs” aren’t the only building blocks.

Conversely, if we try to return to business-as-usual, without finding better ways to support caregiving professions or being better stewards of our natural resources, then things are going to get ugly. We’re already seeing it.

Our world is heating up, literally and figuratively.

The recent Black Lives Matter protests and unrest in major U.S. cities were sparked by police violence and unaddressed institutional racism. But the anger and frustration being expressed in the streets runs even deeper and broader than that.

In fact, a Harvard study has found COVID-19 mortality rates are highest among poor Black and Brown communities that have been most exposed to air pollution. Capitalism and environmental injustice make them sick and coronavirus has been killing them.

So when armed white protesters backed by President Trump demand COVID lockdowns be immediately lifted and poor people of color sent back to work, they’re saying Black lives don’t matter. They’re saying the jobs we do to serve the economic system are more important than our lives.

This visions of “jobs” is a denial of our very humanity.

I’m sure that I’m not the only one who has been praying that one silver lining from this terrible pandemic might be greater appreciation for health care workers and the mostly immigrant workers who harvest our food and serve it to us. They’ve been risking their lives to save ours.

But they’re also being treated as expendable by Trump and Republican governors. If we don’t care for them, will they want to keep caring for us? Why do we exalt soldiers as paragons of patriotism but not the nurses who also risk their lives to protect us?

In a rapidly warming world plagued by more extreme storms, wildfires and other threats to public health and safety, we’ll need our caregivers and other essential workers more than ever. Yet we don’t support these workers, like we do those in the oil industry, which gets billions of dollar in taxpayer subsidies for cooking the planet.

Tellingly, most caregiving doesn’t even count as a “job” or get factored into our gross domestic product. Even when domestic caregiving and agricultural work is counted as  a “job,” it’s denied overtime and working condition protections of almost all other jobs.

We’ve got it totally backwards. The workers we now deem “essential” are among the lowest paid and least protected while those who play fiscal games on Wall Street, yet produce nothing society needs, are paid the paid the most.

One glaring example of this abstraction is the huge disconnect between “the economy” reflected by the stock market and the economy we all participate in with our work and spending. The former is doing strangely well even though the latter has been destroyed by this pandemic and needs to be rebuilt.

How we rebuild our economy will determine whether our unaddressed societal problems, including the climate and extinction crises that humans are causing, continue robbing from the poor and future generations.

So let’s stop focusing on “jobs” and start taking care of people as they perform the work that needs doing. And for that, we’re going to need some the wealth that the 1 percent has been accumulating while we’ve been trudging to our jobs.

More than 40 million Americans lost their jobs in April and May, the most in US history. So President Trump and Republican governors decided it was worth allowing tens of thousands more Americans to die from COVID-19 to quickly bring those jobs back.

That’s not an accusation, it’s the reality shown by the very public health models the White House has been citing, the ones where Trump claimed 70,000 COVID deaths meant he was “doing a good job,” a marker we’ve long since surpassed with no end in sight.

That heartless move to ignore public health officials’ warnings and the Trump administration’s own reopening guidelines were justified as saving the collapsed US economy. They argued that Americans wanted to return to work, even at risk of dying or killing those most vulnerable to the deadly disease.

Yet about two-thirds of Americans say the country is trying to reopen too quickly and three-quarters saying they’ll continue to stay home and avoid public spaces, despite Trump’s encouragement to shop and spend. Infection rates are already creeping up in states and counties that have tried to reopen too soon.

Sadly, the Bay Area’s creative and nightlife communities have been hit hard by the shutdown. My friends who are promoters, DJs, bartenders, restaurateurs and performers have been devastated and many are being forced to pursue more straight-laced jobs.

They’re losing their identities as well as their livelihoods – at least as our situation has been framed by our economic masters. They need economic security so they’re subverting their main roles as culture creators to become wage slaves.

But it just doesn’t need to be this way. We need to remember the once widely accepted idea we should work less as automation and technology do more work for us.

Presidential candidate Andrew Yang developed a big following by recognizing that reality and proposing a $1,000 per month guaranteed basic income to compensate for it. That’s a good place to start before moving on to guarantee health care and housing as basic human rights.

We’ve all subsidized the 1 percent’s accumulation of wealth and power with our jobs for decades, working without getting nearly enough in return. Now, at this pivotal moment in history, the wealthy can start subsidizing the workers for a change.

Americans should have time to create, protest, and relax instead of working so damn hard to meet their basic needs. At a moment when “Defund the police” and other radical reforms suddenly seem possible, let’s use this down-time to push radical economic reforms as well.

Now more than ever, saving the world by working less and creating an economy that values caregiving are real possibilities. Let’s make them a reality.