The Super Bowl is for the very rich, but the people who struggle to live here on the streets every day made a strong statement for the national media 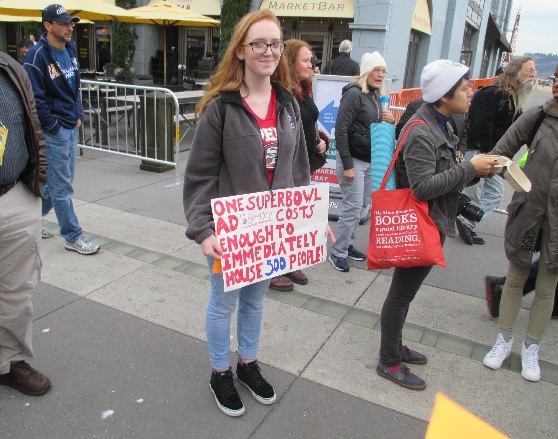 The national news media got a look at San Francisco beyond the (boring) glitz of Super Bowl City and stage-managed press conferences tonight as some 500 protesters showed up near the Ferry Building to send a message that the city’s homeless policy is cruel and unacceptable.

The event was supposed to happen in the largely open plaza outside the closed Sinbad’s restaurant. But an hour before the start, Port of San Francisco workers were fencing off that area, making it a bit difficult for ferry commuters to catch their rides home.

In fact, the Port decision turned the protest into a much more disruptive event than anyone had intended – instead of a short-term tent city on a wide-open space that would have inconvenienced nobody, the idiots at the Port (and I say that with all sincerity, this was really stupid) decided to shut down public space and drive the event out onto the sidewalk in front. The space was crowded; the cops hemmed the protesters in and kept them off the (closed) street (again: why?) so people who just wanted to walk along the Embarcadero were squeezed into the protest.

I counted more than 150 cops on the scene, and I would guess at least half of them were on overtime. A lot of money to make sure that a peaceful group of protesters didn’t get too close to the tourists of Super Bowl City.

And nobody intended to go into the tourist trap. The idea was to set up some tents on the ground, to show that there are thousands of homeless people who aren’t getting the benefits of the corporate party and theme park, and that the $5 million that the city is spending to help the NFL make even more money for some of the richest people in the world could have provided housing for a lot of San Franciscans who now live on the streets.

Police Captain David Lazar was in command, and Jennifer Friedenbach, director of the Coalition on Homelessness, tried to negotiate with him. He was adamant: there would be no entering Port (public) property, and no tents on the ground anywhere. He cited the city ordinance against camping on public property.

Friendebach told him, quite accurately, that the ordinance in question is only enforced sporadically, and that officers have allowed homeless tent cities to spring up all over town – just not anywhere that the rich tourists can see them

But no: Lazar said any tents would be confiscated. And that might lead to arrests.

So on the protest went, as more and more people showed up, and the activists did what they intended to do – they set up tents, with political messages painted on the sides.

There was a moment of tension, when Lazar got on the loudspeaker and announced that any tent on the ground would be removed. He had a huge phalanx of cops behind him.

So the activists did the only thing that made sense: The lifted the tents off the ground and held them in their arms. That gave Lazar no choice – he backed off.

And for more than 90 minutes, that’s where it stood, with protesters making speeches, denouncing Mayor Lee, in some cases denouncing the cops, and making it clear that things are just not okay in Super Bowl City.

There were moments of absurdity: At one point, the cops blocked the sidewalk to keep people coming from the south from joining the protest. Seriously: They blocked a public sidewalk to protesters. After a few pointless tense minutes, the officers backed off.

The whole evening was like that. Mass numbers of police in riot gear. I met one man who was some sort of law enforcement officer with a police dog, but he wouldn’t even tell me what agency he was from (homeland security?)

There were Coast Guard officers guarding the Port land – from what?

Former Assemblymember Tom Ammiano at one point addressed the crowd and asked, “What are we, ISIS? How many cops do we need? What am I going to do, hit them with my purse?”

Paul Boden, a longtime advocate for homeless people, said that “we are the best protected fuckers in the world” – there were so many police officers on hand to keep order, but when poor people try to sleep on the streets, they wind up getting citations. “It’s illegal to sit or lie on the streets,” he said. “What the fuck are we supposed to do?”

That’s the question I hope the news media walked away with (and so far, the Chron is making this sound like something that ought to be a funny story, which is really, really, wrong). The city is happy to host an event that caters to the very rich. The mayor has made every effort to keep out of sight anyone who might mar the image of a perfect, clean, San Francisco. For the rest of the week, the city has been turned over to the one percent; it’s a corporate playground, and the rest of us can just shut up and live with it.

But tonight, for a few hours, the rest of us made a statement. I hope the world is listening.

... plus saving the SIP hotels, cracking down on serial permit scofflaws, and more problems with private prisons. That's The Agenda for Feb. 22-28
Read more
Housing

With federal and local money, taking over hotels would cost a fraction of the price of building affordable housing.
Read more
News + Politics

Adachi Project film shows the inside story of virus outbreaks -- and the Geo Group's failure to contain them.
Read more
News + Politics

So San Francisco isn’t broke. Where is the money?

What if we tried to attract artists instead of tech companies? Hearing will look at post-COIVD economy. Plus: A huge payout to victim of police abuse. That's The Agenda for Feb. 15-21
Read more
COVID

We can reimagine the post-COVID San Francisco

The future should be up to us -- not the corporate overlords who have controlled city planning for decades.
Read more

The tiny island nation with universal health care has its own vaccine, and could protect its people before the US does.
Read more
Party Radar

Thoughts on Lawrence's passing—and how his heroic drive still resonates in SF, even now.
Read more

Letter to the Editor: After COVID, a polar bear swims freely again

The tiny island nation with universal health care has its own vaccine, and could protect its people before the US does.
Read more
Housing

With federal and local money, taking over hotels would cost a fraction of the price of building affordable housing.
Read more