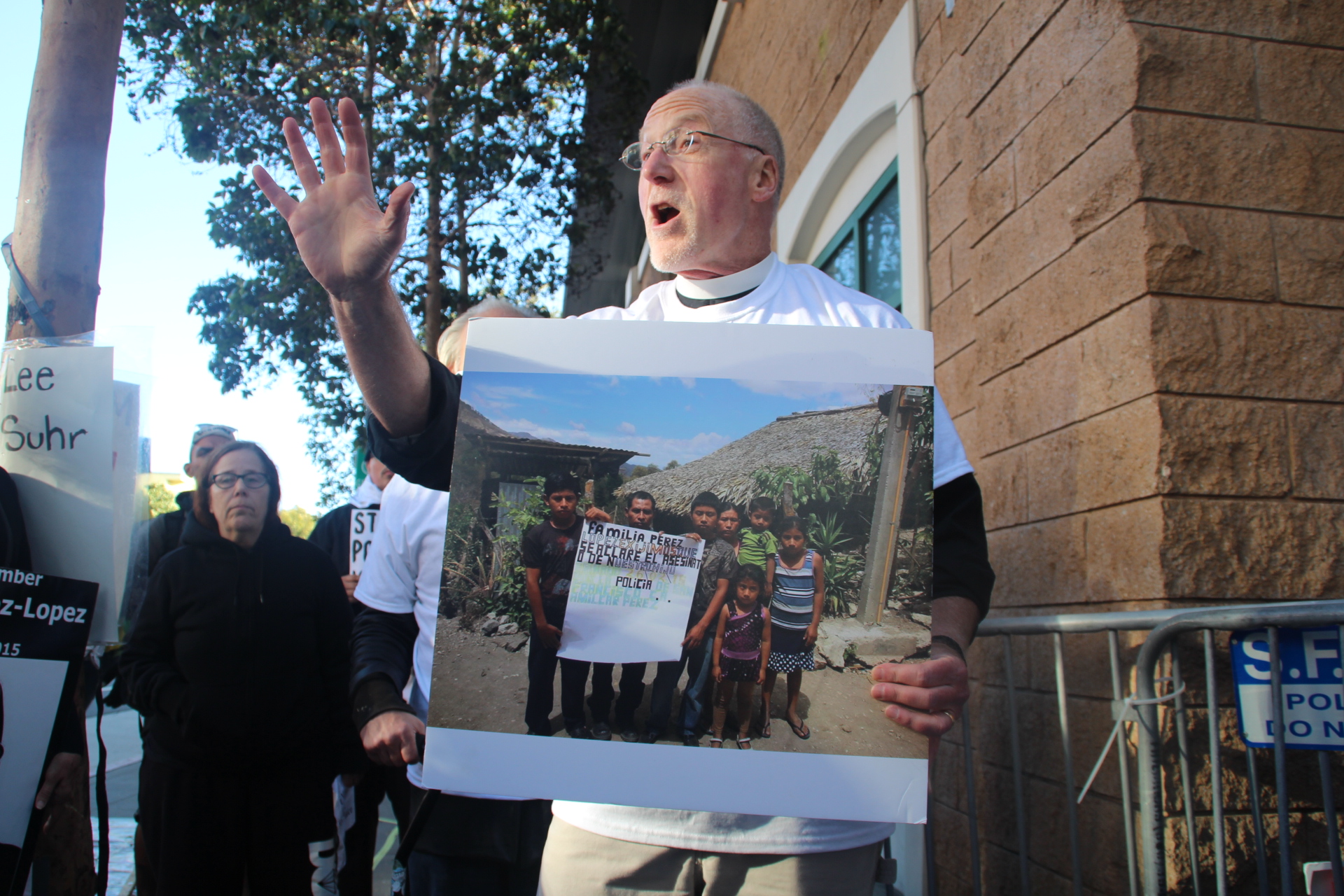 On 27 April, 2011 Gregory Suhr became the San Francisco chief of police. Yesterday, on the 5th  anniversary of his time in the role as Chief of Police, five people were on a hunger strike outside the police station for the Mission Neighborhood on 17 and Valencia. The day also marked the first anniversary of #Baltimoreuprising that followed Freddie Gray’s funeral. Gray died in a police car, in Baltimore, from injuries to his spinal cord. The hunger strikers were also joined by Father Richard Smith for the weekly silent vigil to support Justice for Amilcar Perez Lopez, a Guatemalan migrant worker shot and killed by SFPD in 2015.

Hunger strikers today discussed whether they should mark this ominous occasion, and a proposal was made to get a birthday cake and light five candles on it, “We shouldn’t mark it with a cake, that’s food, right?” remarked one of the five, Edwin Lindo. Despite going eight days hungry, Lindo’s humor is still intact.

Heavy winds followed rain, which forced hunger strikers to sit inside the foyer of the police station for shelter. On Monday, they were threatened with arrest if they slept, sat, or stayed inside tents. “I have never felt so comfortable coming inside a police station” an African American supporter remarked to Gutierrez and Lindo.

Gutierrez, 66, has grown weaker over the week. “Only I know how much pain and weakness my body is in, but when I see so many people coming to support us I forget all about my pain. This is what keeps me going.” She said.

A constant stream of supporters trickled in as, high school students and seniors alike came in to show their support. Osmry Saprenadavilan, 15, said: “I came here to know why these five people are here and going hungry. For instance, Cristina is old and I really respect her for doing this, because I am Latina I feel bad that people are dying in my city and I want people to fight for them. I can’t because I am young and I don’t think I have the capacity to do this,” she said.

Jenny Morales, from Good Samaritan Family Resource Center, accompanied a dozen teenagers.  “I am very sad, as a Latina woman, to see the state of justice in this city, but at the same time I am really happy to see these people risking their lives to bring systemic change. This isn’t just for this generation but for next generation,” she said. Patricia Dezib, 15, was keen to learn more from  Maria Cristina Gutierrez. ” I am here because we are trying to appreciate what the people are doing to stop the police brutality, we are trying to help stand with them” Dezib said.

Sarah Menefee, 69, sat with Gutierrez to help her get through the day. “I can’t tell you how much I love and respect what you are doing. I can’t believe the strength you have and how you can speak so clearly and powerfully even when going hungry for a week. I want to thank you for making this city a better place for our children,” she said.

Menefee wasn’t alone. Cars stopped by to shout out a thank you, some honked and moved on while others parked and asked if they could bring some supplements to help. A woman walking by stopped to ask what was going on and proceeded to hand out a $100 bill to Max Leung, a community organizer who has been with the strikers everyday. “I’m sorry we do not take cash donations, but thank you” Leung said. There’s just so much stuff that’s piled up, yet people continue to bring in thermoses full of hot chicken broth.

When news rippled through that a Baltimore police officer shot a 13-year-old boy carrying what the police said was a replica gun, Gutierrez, who at 66 is on her second hunger strike, called on people in Baltimore to join the ‘Frisco 5’, as she and her four cohorts are being called. She had this message to send:  “I am one of the hunger strikers. I wanna send this message to the people of Baltimore. I am happy that you are revolting, and  you are protecting that you are saying enough is enough. I am inviting you to do something very special so that we can stop police brutality here and all over the country.”

“Maria has been talking about this for a long time, and it was the Luis Gongora shooting that sparked the group along,” Yayne Abeba, local resident, comedian, and organizer for the protest told us. “I actually met Edwin when I was driving for Lyft. I saw him soon afterwards at a Justice for Mario Woods coalition meeting and we’ve been friends since. My grandfather was one of the first black men in the San Francisco Police Department. I support the hunger strikers because enough is enough.”

At 6 pm, the protesters were joined by Father Richard Smith, who is leading the campaign to seek justice for Amilcar Lopez, one of the four men of color shot by the San Francisco Police Department over the past fourteen months. Smith held a photo of Amilcar’s family as he spoke to people gathered. “This is a photo of Amilcar’s family, he came from abject poverty, these are the people he was working so hard for and just when he was able to get electricity for his home. Just when he was able to achieve something so big for his family he was shot at six times in the back by the SFPD.”

While addressing the protestors, Father Smith asked them to continue the pressure on San Francisco District Attorney George Gascon, who in the next week or so will announce whether he will file charges against the officers involved. Alex Nietos parents, Refugio and Elvira Nieto, also stood holding posters of Amilcar Perez Lopez. As protestors lined up for a silent vigil, Smith remarked “This isn’t passive silence, it is silence that shames and call for action.” As protestors stood facing the street, holding placards that carried a caricature of  Amilcar Perez Lopez, several cars honked their horns in support as they passed by during the one hour silent vigil.

Soon after the vigil was over, Captain Daniel Parea walked out of the station. Lindo and Smith approached him. “Captain, are you okay with this protest,” Lindo asked. Parea, visibly annoyed by Lindo remarked: “Now why would you ask me that? I don’t know what have I done to offend you that each time I come out, and this is my work place, you come at me,” Parea said before he walked off. “Good day to you sir” Parea said as he passed.

“I was asking because you threatened to arrest us, so I want to make sure you are okay with this,” Lindo remarked as Parea walked towards the station gate.

As the night approached, Lindo settled in to a chair, and his partner, Dr. Estell Williams made sure he was warm enough. In an emotional encounter, Tracy, active campaigner for  Justice for Alex Nieto, held Lindo’s hand “Please promise me, promise me that you will not let your personal health be effected by this, you have to stop once your body is giving up. Please look into my eyes and promise me. You’ve already done more than enough for the cause and everyone knows that,” she said to Lindo.

“I can’t stop this knowing that they might kill another one of us. This has to stop, I can’t give up,” Lindo remarked.

Throughout the day local residents stopped by to donate supplies and offer moral support. Local resident, Sarah Menefee, 69 said “We have to rein in the police. They have to be peacemakers and not murderers and if they murder our people they need to be brought to justice.”