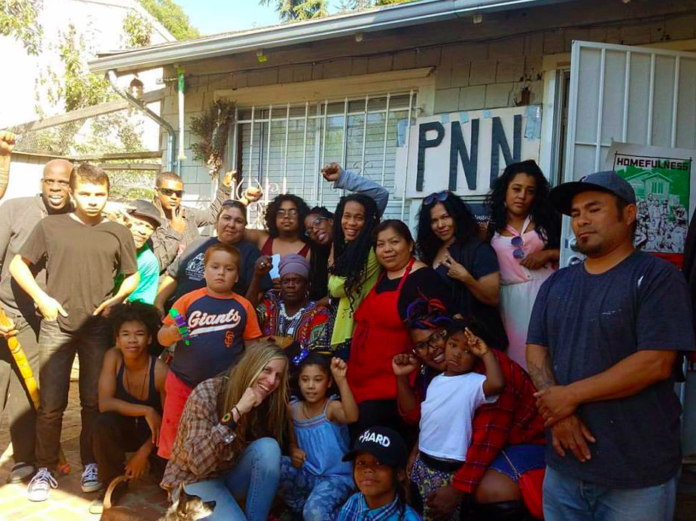 A few months ago you announced the launch of a $30 million study of homelessness: Benioff Homelessness and Housing initiative . As you launch yet another study, we as poor and houseless people at POOR Magazine implemented a solution — a homeless and poor people’s solution to homelessness, that actually works. A solution already being built by the people impacted first and worst by so many failed policies and  politricks. A place we indigenous, immigrant, criminalized, disabled, and houseless people are currently building in Deep East Ohlone /Lisjan land (aka Oakland) with spiritual guidance from First Nations peoples on a small parcel of Mama Earth. A small parcel which we have purchased with radically redistributed resources from folks we have taught in a poor people-led school called PeopleSkool.

A small parcel of Mama Earth that we are working to spiritually and legally un-sell, steward and respect off of the grid of more speculation and destruction, because if we stopped buying and selling Mama Earth homelessness would end.

And so POOR Magazine/Homefulness would like to propose to you to redistribute $1 million of that $30 million to build the second in a series of Homefulness permanent land-liberation housing/healing projects modeled after the one we are currently building.

We have already broken ground on what will ultimately become 13 units of housing — we already have the permits, the zoning and planning approval, the structures, a liberation school for homeless youth, a radio station and a “sliding scale Cafe” and in Phase Five already house four formerly houseless families, children and elders (myself and my son are one of the newly housed families). And this is only in Phase Five. We only have three more phases to complete this herstoric project. We are less that $200,000 from this goal.

To keep the proposed solution within the constraints of the Benioff Homelessness and Housing initiative, we can frame it as a study — a solution based study: The impact of Housing on Homeless people, which includes findings, recommendations and an actual solution, rather than just more talk and discourse and proposals and demonstrations and grants while unhoused people die on the streets.

Salesforce Tower, your office headquarters, is built where an entrance to the old Transbay Terminal stood.

Nine years ago, I saw the sheen of the multiple hefty bags strapped to his back and head from behind the thick glass doors. It was Jose F, a houseless elder who slept in the ancient marbled terminal. Small tears trickled down his cheek mostly obscured by the corner of the plastic bag that rested on his face. Jose F didn’t speak, or cry or scream or yell. He didn’t fight or demand, or even ask. He just stood there in absolute terror as the CalTrans workers hovered near shouting at him to “Clear the Building, NOW!”

Things happened very fast and yet somehow so painfully slow that night in BlackAugust 9 years ago. 50,000-watt lights bored down on the vast ground floor of the terminal, a huge drill/crane whirred, grinded, and burrowed into the marble surface in a terrifying volcano of construction and destruction. In the middle of all of this, the last 125 unhoused folks who were regular residents of the building hid in the corners of benches, behind doors, under tables, and in the back of empty store fronts inside the vast ocean-like space.

At the strike of 11pm, he construction and Cal-trans workers made their final call. Everyone must leave. I was still coaxing Jose and Jack, and Annie and Miss Melissa and so many more to consider leaving before the cops and anti-social workers arrived on the scene to forcefully evict or incarcerate them. But most people had become paralyzed with absolute terror and were unable to move, much less speak or leave the building.

Nine years, scores of elders abuse and death by eviction, thousands of unhoused San Francisco residents later, not to mention hundreds of sweeps of belongings and people,tent seizures, more anti-poor people laws, and the death by police murder and exposure of hundreds of unhoused elders we have now come to what I call #StatesOfEmergency. With all due respect, how is a $30 million study on homelessness even close to an answer?

You are the owner of a multi-million dollar tech firm that has engaged with Customs and Border Enforcement (CPB) that causes the detention, caging and death of houseless refugee children. You are the owner of the building that replaced part of the Transbay Terminal that used to provide safe, warm shelter for more than 100 unhoused people. And you are a major financial sponsor Prop. C a really excellent, poverty-skola led piece of legislation.

I write this letter to you not as an advocate, activist or revolutionary, but as a child of a houseless, disabled mama, who spent my childhood from 11-18 as a homeless young person and then later as an adult. Even after all the work I have done, I ended up houseless again due to the violent gentrification of San Francisco, resulting in becoming houseless again with my five-year-old son after receiving a $700 rent increase in one month.

From the age of 11, people were always counting, surveying, and studying us and yet that would never lead to us getting housed. Not only were we studied, counted, researched, and surveyed, we were also hated, police-harassed, profiled, cited, and later, when I became 18, incarcerated for the act of sleeping in our own car and on the street. As I am sure you are well aware, there are and always have been multiple laws on the books to criminalize the act of being unhoused, which is why my fellow unhoused sister-mamas decided we had to bring our vision alive — a homeless/landless people’s self-determined solution to homelessness. It’s a solution we call Homefulness.

This study you are funding, which no matter how its described, is still just a study — something that has been executed by academia and government, NGO’s, public health agencies and non-profits, leaving us still in a homeless crisis.

And so far from the first public event seems like a $ 30 million public relations campaign to talk about homelessness as a “problem” without talking with or hearing from unhoused/impacted people. It’s more of what I call, About Us Without Us  While the reality is affordable housing has never been affordable, shelters and sweeps and courts and “clean-ups” and surveys and trials, and more panels and more studies and podcasts and then more panels gets us nothing but more salaries for more pundits and talkers and alibis and laws and clean-ups (hygenic metaphors) of our unhoused bodies.

Our solutions and work are a template for an ancient and yet new way of working, living and caring for Mama Earth and her Earth’s people. This medicine flows from the recently released book Poverty Scholarship-Poor People-led Theory, Art, Words and Tears Across Mama Earth, and coincides with the launch of the Bank of Come-Unity Reparations and the Tech Reparations Fund, which asks tech industries like Salesforce to redistribute 10-15% of their profits to build the equity of unhoused Bay Area residents whose homes have been lost in the last five-10 years of the tech boom, and help people either stay in their existent homes and neighborhoods or help to build more Homefulness projects that provide permanent housing for themselves and their families.

Homefulness is one of a very few homeless/landless, indigenous people-led movements across Mama Earth reclaiming stolen/occupied land for poor and houseless people. These are already tried-and-true ideas gifted to us from our ancestors; we don’t need more studies to “prove” them. Projects like MTBI from Middle Tennessee, which supports the Sojourner  Black land reclamation project and IDA a QTPOC-led land liberation project, First they Came for the Homeless in Berkeley claiming safe ground in public ( that isn’t really public), the Shackdwellers Union in South Africa — built for and by houseless South African youth and elders — the Sogorea Te Lan Trust in Oakland, the first Native woman-owned land trust, reclaiming land for indigenous ceremony and healing … we don’t need to study ourselves – we know what works and are manifesting it.

In the end, Mr. Benioff, perhaps you, like most people, think the answer is only what seems safe and understandable and maybe you like most people only believe people with letters and paper claiming their “scholarship” and expertise are the ones to be listened to and believed. But those of us who experienced the violence of homelessness and poverty, who call ourselves “poverty scholars” in one of the richest cities in the world, do actually have ideas, solutions and answers and are actually doing them.