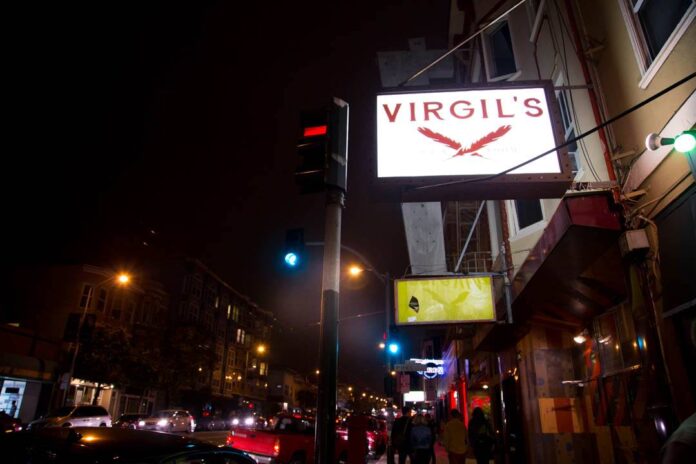 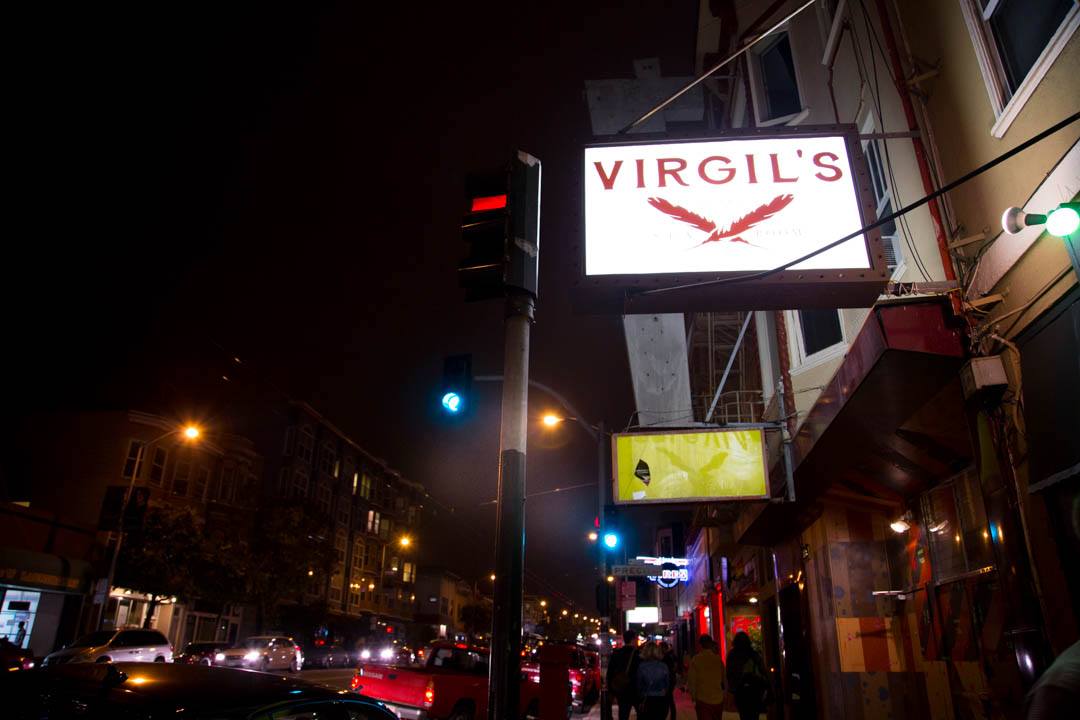 For Lila Thirkield, creating an all-inclusive space like Virgil’s Sea Room in the Mission was a deep labor of love. “I worked on it for more than a year before it opened, while owning and running the Lexington Club,” she told me over the phone.

“I was inspired by bars like El Rio and parties like Hard French that were bringing different people together. My vision was something that reminded me of the old Mission, almost pre-hipster, when lesbians, gay men, and queer people would roam the ‘straight’ bars. Back when I could bring a crew of my dyke friends into an Irish bar and we’d make friends with old guys drinking in the corner, and I could play pool with a future supervisor. Those kinds of spaces where everyone was cool with each other.”

Thirkield opened the bar in 2013—its name a coded personal reference to her godfather, legendary playwright Lanford Wilson, “who definitely liked to spend time at the sea”—and from the beginning Virgil’s sailed high, riding a wave of exuberance and allyship that was bringing LGBTQ and straight people together culturally and politically.

“The mix of people was incredible. We concentrated on booking groups like weddings and special events, that was a big part of our business. On the patio would be a wild queer birthday party, inside one table would be a tech happy hour, and over there would be the hospital construction crew having some beers together while someone brought in tacos. By the end of the night everyone would be mingling and laughing.”

The location was just right, too. “It was a dream to be right next to El Rio, such a legendary place, and I think the two bars really complemented each other. There, you could dance and party, and at Virgil’s you could sit outside around a table and relax with your friends. The location was a real honor, I love this neighborhood. It has a strong merchant community, everyone knows each other,” she said. Virgil’s hosted many charity events and non-profit benefits, its innovative Cocktails for a Cause nights raising thousands of dollars for local organizations (including 48hills).

The Lexington Club closed in 2015 after 18 years, one of the last long-time lesbian bars gone, and Lila concentrated on Virgil’s, pairing with investors and partners like politico Tom Temprano and bar scene favorite Gillian NicGearailt, who went on to other projects. “Just like at the Lex I had a staff I adored, and I got to work with amazing people,” Thirkield said.

Like any business, Virgil’s had its ups and downs. The large patio was mostly out of commission during the winter months when things were wet and cold. “We still did business, but we saved up during the good summer months for the three-month stretch when it slowed down for almost everyone.”

The bar was just emerging into its quicker spring period—sales normally jumped up to 30 percent, Thirkield said—when COVID hit and bars were ordered to shut down in March 2020.

“It was really blow because we were already counting on March to help us get our numbers back up,” Thirkield said. “When the shutdown hit, my instinct was to go into deep hibernation mode. I stopped paying rent. We shut down everything we could, went as radically ‘small’ as possible with bills. My main concern was keeping my staff and patrons safe. There was no question that we had to close.”

As the months dragged on, however, uncertainty reigned. “It was confusing as to what we could do or not do as a non-kitchen bar space with a patio, as far as what the city was saying. I get that it’s a moving target, but the communication was not very clear. At one point it seemed like we would be able to have limited service, and we came into the bar trying to see if we could do it. I spent $1000 on PPE. But just opening 10%, 25%—that doesn’t pencil out with the expense. Our patio heating lamps alone are a huge monthly bill. And that’s just one thing.”

“I saw others bars pairing up with restaurants and dropping $10K on parklets, and I’m happy for them if that makes them money, but it wouldn’t be enough for us,” Thirkield said. Government help, too, was confusing. “We would apply for grants, but so would two-hundred thousand other people,” Thirkield said.

“As for PPP [the federal Paycheck Protection Program, which grants money for payroll and other expenses] it seemed to be designed backwards. It was for businesses that were operational and still had working employees—well, that wasn’t us and that wasn’t most small bars,” Thirkield said. “There’s no ‘one size fits all’ solution when it’s so complex behind the scenes, and everyone has different bills and arrangements. It seemed the people who needed the money most were last in line.

“But beyond that, I just didn’t want to put my staff at risk of getting sick. I couldn’t live with myself if that happened,” Thirkield said (A GoFundMe to help Virgil’s staff was launched in March and is still active.).” I understand the anger and frustration of other owners who put their whole life into a place, and have families, and things maybe were going really well for them before this. It may be all they have. For me, my staff came first.”

Meanwhile, Thirkield was running through her savings hoping the pandemic would pass, and found she was approaching an amount that no GoFundMe could fix. “I had a cut-off number. If we hit that, I would have to call it quits. We managed to negotiate something with the landlord, but we would still have to pay them back at the end. We cut back everything.

“I saw other bars taking out these really big loans. I absolutely love what we did with Virgil’s, it was a very special place. I love the community we built together. But I don’t want to spend the next five or more years of my life digging out from under this huge debt. That kind of stress and risk, when who knows even now when we can open again—it’s not worth it.”

Earlier this month, Virgil’s hit the dreaded debt number, Thirkield’s savings were exhausted, and she spoke with her staff about the decision to close. “Of course, it was so hard. You pour every minute into a place. I had to figure almost all of this out myself, so you feel the responsibility. And there’s the added fact that you’re one of the fewer and fewer queer bars in town. It was sad.”

But the decision was made. Virgil’s will be out of the space by the end of the month, another magical spot destroyed by COVID, compounded by lack of timely support from the government.

Virgil’s joins fellow queer bar The Stud in closing, and other spots remain in jeopardy: Nightclub Oasis just announced it was putting on a 12-hour drag telethon March 6 to stay afloat. The Eagle is trying for historical landmark status, which may increase its grant prospects. Old school classics Twin Peaks and Aunt Charlie’s made news with record-breaking fundraisers—but that was almost a year ago. I’ve heard barely a peep from Jolene’s and Hole in the Wall. Meanwhile, the handful of other gay bars are trying to get by with limited or takeout service. (El Rio started serving takeout drinks and food from pop-up Frisco Pink last Friday, get some!)

There are developments. The Supervisors unanimously passed the Music and Entertainment Venue Recovery Fund, proposed by Matt Haney, which is aiming to be up and running by March with $1.5 million in grants to start. Governor Newsom signed a stimulus bills that included $2 billion in grants to help restaurants and other small businesses. On Wednesday, San Francisco official said they expect some indoor dining to return March 3, when the city is expected to reach the “red” tier according to state guidelines. (Not sure yet what this means for bars; I know I won’t be venturing indoors for a while.)

One of the biggest reliefs of all, as evidenced by uncharacteristically joyful San Francisco social media timelines, is that food workers have begun to be vaccinated this week, eligible along with teachers as part of tier 1B—a huge step towards protecting vulnerable populations, and the essential workers we rely on.

But all this is too late for Virgil’s and many other small businesses. I expect there will be several deep dives into how things could have gone differently, and better. For now, though, Thirkield’s beautiful dream must sail into the sunset.

“It’s a strange feeling because there’s nobody specifically to be mad at, there’s no real villain other than this virus,” she told me. “We did our best. It just kind of is what it is. I don’t know what I’ll do next. Got any ideas? Maybe I’ll ask the community. I can leave a suggestion box at our old front door.”

After more than four years on the road, Miguel Escobedo is setting up where he started.
Read more
News + Politics

The Supreme Court could consider whether parody is protected speech. The Onion makes the point, quoting a Bay Guardian case. It's a serious issue.
Read more

Oakland gets a whiff of Down Under energy at the spooky two-day rock fest, hosted by John Waters