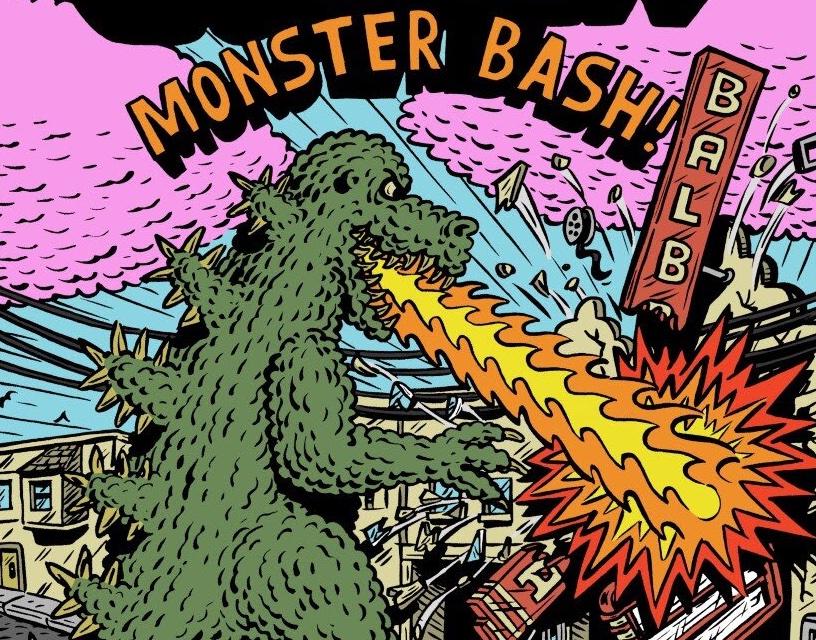 This weekend’s cinematic “return to normalcy” sign is the re-opening of the Balboa Theater, which is coming back not with a whimper but a roar—that of the “King of Monsters” himself. The historic venue’s two screens will both play host this Fri/14-Sun/16 to CinemaSF and Bay Area Film Events’ presentation of Godzilla’s Monster Bash. Its 10-film retrospective is all drawn from the original Toho Studios franchise, before there were any reboots either Japanese or (more recently still) American.

The 1954 hit that started it all wasn’t released in the US until two years later, with major cuts and added scenes (with pre-Perry Mason Raymond Burr) that turned a rather serious fantasy parable—very much influenced by the still-recent horrors of Hiroshima and Nagasaki—into a drive-in monster mash. But it was such a smash in that form that the entire series became less and less serious.

By the mid-60s, prehistoric reptile Godzilla was no longer a raging instrument of destructive vengeance against heedless mankind, but the increasingly goofy and cute protector of the Japanese people. This necessitated the introduction of new foes: Thus (among films in the Balboa series) 1964’s Mothra vs. Godzilla, sea creature Ebirah, Horror of the Deep (1966), 1971’s Godzilla vs. Hedorah (aka the Smog Monster), the next year’s Godzilla vs. Gigan, Godzilla vs. Mechagodzilla, and the all-star Destroy All Monsters (1968) and All Monsters Attack (1969)—the latter a rarely-revived cheapie deploying loads of stock footage from prior entries.

The Balboa Godzillafest also includes two features without the big green guy, the original 1961 Mothra and 1969’s The X From Outer Space, the “x” being basically a UFO-delivered interplanetary Godzilla. These films played kiddie matinees in the US and elsewhere for years, then became equally popular TV fare, unconsciously imbuing generations with a notion of “camp” via their rubber-suit-monster mayhem and ludicrous dubbed dialogue. The Balboa showings, however, promise to be subtitled Japanese-language versions, with the exception of kid-friendly early shows. Seating for the re-opened theater will be at 50% capacity. For full schedule and ticketing info, go here.

Another mini-festival will be the return of the City Shorts Student Film Festival, showcasing works from City College of San Francisco’s Cinema Department—this 20th edition representing a recent “best of” to make up for last year’s COVID-forced hiatus. As alumni include such luminaries as Joe Talbot (The Last Black Man in San Francisco) and David Weissman (The Cockettes, We Were Here), you might glimpse future directorial stars of tomorrow in a program that encompasses documentary, narrative, and experimental shorts. Being offered online-only this time, the festival is available from Roxie Virtual Cinema Fri/14-Fri/21, see here for details.

New releases of note in theaters and home formats this weekend:

The Killing of Two Lovers

Robert Machoian’s micro-scaled drama opens with David (Clayne Crawford) on the verge of the titular act, standing with a gun over a bed on which his wife (Sepideh Moafi as Nikki) and the office colleague she’s having an affair with lay sleeping. But he doesn’t do it: He’s desperate, all right, yet still clings to a hope of reconciliation. After all, officially he and Nikki are just “taking a break” from a marriage that began when they were very young, and she does not deny that he’s a great dad to their four children.

But this arrestingly spare movie set in deepest nowheresville (the Western Utah hamlet of Kanosh, pop. 476) isn’t really about infidelity, let alone vengeance. Instead, it’s about the pain of a relationship that falls apart because one partner has changed and the other hasn’t. While there’s no question David is a fundamentally good person, he’s largely the same guy he was in high school half a life ago, still performing odd jobs and taking care of his widowed father. Nikki, on the other hand, has developed a real career, outside interests and friends. She’s sympathetic to his needs, yet can’t ignore that she’s simply outgrown him. It’s a conflict so common and elemental one is struck how seldom such things get depicted in movies.

There’s an almost Bressonian minimalism to Two Lovers that approaches high-art abstraction, at the same time that the emotions and situations depicted are intensely relatable. I saw the film at Sundance over a year ago, and while others caught there have been nearly forgotten already, this one left an imprint so distinctive I can still remember specifics of composition, location, even weather. Neon is releasing it to available theaters (including the Embarcadero) and On Demand platforms Fri/14.

Between accepting lucrative assignments in Hollywood popcorn movies, Mads Mikkelsen has remained loyal to several good writer-directors in his native Denmark. He just had a significant hit with one, Thomas Vinterberg (The Hunt, The Celebration), in Another Round. If you cottoned to that film’s ambitious yet warmly grounded seriocomedy, you might welcome going a little further out on a not-dissimilar limb with this latest from Anders Thomas Jensen, who is perhaps best known here as a screenwriter (In a Better World, Brothers, After the Wedding). But as a director, he’s given Mads an opportunity to display his underappreciated funny side in eccentric comedies Adam’s Apples and Men & Chicken.

Yet here he’s the straight man: A rather humorless career military officer whose discomfort with domestic life is underlined when he’s called home after his wife dies in an apparent train accident. Their teenage daughter (Andrea Heick Gadeberg) is inconsolable; in any case, Markus has no idea how to console, or deal with emotions in general beyond bottling them up. But a statistician (Nikolaj Lie Kaas) who was on that fatal train has reason to think it was no accident. While the police dismiss him as a crank, he and two fellow brilliant, ill-socialized geeks (Lars Brygmann, Nicolas Bro) confront the surly widower with evidence that suggests Markus’ wife and other victims died by getting in the way of a deliberate criminal-world hit.

Thus after a mournfully serious first half hour or so, Riders of Justice begins turning into a black comedy with a surprisingly open heart, a difficult combination Jensen has pulled off before. By turns violent, absurd, tasteless, a parody of touchy-feely-ness, and genuinely touching, it basically drops a nuevo Three Stooges into a Liam Neeson revenge thriller, leaving room also to meditate on the laws of probability and the terrible possibility of sheer coincidence. If not everything works, Jensen’s latest seriocomic Island Of Misfit Boys is, like his earlier ones, often both hilarious and endearing. It opens Fri/13 at theaters (including the Embarcadero and Shattuck), with On Demand availability as of Fri/21.

There Is No Evil

Death also haunts this long (150 minutes) drama by officially “banned” Iranian director Mohammad Rasoulof, who actually filmed it in secret—which may surprise, given its handsome technical polish and relative freedom of locations. However, the fact that this winner of the Golden Bear award at the Berlin Festival last year would never have been accepted by government censors is clinched by one line early on: “This is Iran. There is no law here. Just money and nepotism.” That moment, among many others here, guarantees that Evil (like Rasoulof’s prior five features) will go unseen in Iran.

The film is actually an anthology of four stories, all addressing the death penalty and its use/abuse in Iran. But that theme is not always obvious in the individual segments, at least not immediately. In the first section, a middle-aged man with a calm if somewhat sad-sack demeanor goes about his everyday business with a high-strung wife and bratty daughter. It is only when he returns to work the next day that we grasp his ghoulish relevance to the subject at hand. Next, a group of army conscripts trying to sleep in their barracks argue over the grim task of having to participate in executions as a component of their compulsory national service.

That claustrophobic miniature is followed by sunlight and nature, as another soldier on leave pays a surprise visit to his beloved in the country. But her family is mourning someone, and the revelation of that person’s identity pushes his would-be courtship trip in a very dark direction. Finally, a young woman raised abroad is hosted by her uncle and aunt on a holiday whose jarring true purpose is withheld from her until it can no longer be avoided.

These largely quiet tales take their time, yet are never ponderous. Past circumstances and personal moral quandaries are discussed, but the fundamental injustices of an authoritarian state hang over the film silently, with little need for explicit articulation. While its often meditative pace requires some patience, There Is No Evil is no philosophical abstract. Instead, it’s a potent and accessible commentary on reality in a nation where its basic themes are not to be spoken of. It plays Smith Rafael Film Center’s Rafael@Home program and other virtual cinemas of Fri/14.

Previous articleBeyond roads and bridges: The push to consider nature as essential ‘infrastructure’
Next articleBoudin allies speak out at a rally against ‘recall madness’

Plus: 'Holler' shines through strong performances; 'In the Crosswinds' too pretty for tragedy
Read more
Movies

Proposal heard in budget committee calls for major increases to SFPD -- even when the city is investing in alternatives to armed law enforcement.
Screen Grabs

The inaccurate reporting and social media just continues, as most of the major local media stands by or goes along.