More
UncategorizedFlipcharts, planners -- and the ongoing attack on blue-collar...

Flipcharts, planners — and the ongoing attack on blue-collar jobs in Soma

The controversial plan envisions a massive upzoning (more height and density) and a corresponding amount of highrise, high-rent development in the area, as this map from TODCO, Tenants and Owners Development Corporation, makes clear. 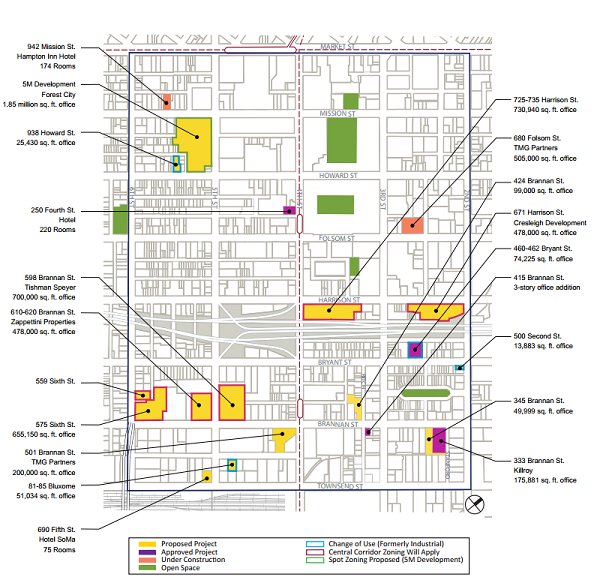 The proposed drastic changes have recently been highlighted by the controversy over Kilroy Realty Corporation’s proposal to build a highrise office tower at 575 Sixth Street, part of the site of the San Francisco Flower Mart.

The threat to the Flower Mart encapsulates the plan’s larger, most disputed feature: the displacement and likely destruction of at least 1,800 blue-collar jobs.

I started covering the plan in October 2013. Since then, this is the planners’ first effort at community engagement about their proposal. I’m always curious to see how public officials handle citizen participation. To what extent do they encourage in-depth discussion of the issues at hand? How much control do they seek to exercise over that discussion? The usual answer to the first question is, not much, and to the second, a whole lot.

It briefly seemed as if this event might be different, which is to say, intended to promote meaningful and genuinely democratic conversation: The Thursday before the open house, people who’d signed up for the event received an email from the Planning Department that included four new policy papers dealing with affordable housing; PDR, or production, distribution, and repair—as industrial uses are known in San Francisco—arts/ arts/non-profits (in other words the uses that can’t afford market rents, especially in today’s market); privately owned-public spaces; and community facilities. They’re all posted on the department’s website page under “Plan Refinement,” along with statements about retail, hotels and requirements for commercial use on large sites.

I printed out the four policy papers and brought them to the meeting.

When I arrived, one glance at the room revealed that it was business as usual. The chairs had been arranged in four circles, with a flip chart on an easel assigned to each group.

I have an aversion to flip charts. The sight of one at a meeting reminds me of the countless other meetings I’ve attended where members of the public were invited to voice their views about some complicated and controversial planning proposal and a staffer compressed those views into a few words on the chart’s blank paper. Those random and perfunctory notes would (sometimes) re-appear in some official record of the meeting.

What did not appear was a record of any substantial exchange over the issues. That’s because no such exchange occurred. Nor could it have occurred, given the meeting’s format. Indeed, I’ve come to think that precluding such an exchange is the point of that format.

So, too, at last Tuesday evening’s open house. After the 80 or so people who showed up had dutifully seated themselves in the circled chairs, Planning Director John Rahaim made some introductory remarks. He assured us that, “as my good friend and colleague John Elberling [TODCO Executive Director] reminds me, this plan is not about extending Downtown.” (Elberling was in the room.)

Rahaim went on tacitly to plug the removal of Prop. M’s cap on office development in the city. He claimed that “less than 10% of the city is zoned for offices. We are running out of space.”

“We,” I presume, refers to the developers and their buddies in City Hall and the Planning Department who equate endless office development with prosperity (and, not incidentally, the permit fees that fund planners’ jobs).

But what, I wondered, did the 10% reference? It couldn’t possibly be the amount of office square footage in the city. It had to be the square footage of on-the-ground property—the “footprint” of all the offices in San Francisco. An ambiguous, not to say disingenuous, formulation that, I imagine, we’ll be  encountering a lot more, as the anti-office-cap campaign gears up.

Then we got our marching orders from the planner who’s overseeing the Central SoMa Plan, Steve Wertheim. Each of the circles was dedicated to a different topic: affordable housing, open space, transportation/streets, and PDR/arts/nonprofits. We would be allowed only 20 or so minutes in each circle, after which we had to get up and move to another station. Each circle had a planner moderator who would give a three-minute overview of the topic at hand and another planner who took notes on the flip chart.

There were no signs indicating which circle dealt with which topic. I’d initially taken a seat in Transportation. I stayed there long enough to hear the presiding planner say that he “view[s] cars as a legacy system that needs to be supported”—a statement that had me envisioning an historic preservation program for private automobiles. Perhaps I could get my 2002 Subaru declared a “structure of merit.”

My regular beat at 48 hills is PDR. As it happened, the Transportation circle was next to the PDR circle. When I overheard a man in the latter group talking about the Flower Mart and saying that something—a gas?—“kills flowers,” I couldn’t resist moving over to the PDR station.

The speaker was Bob Otsuka, the general manager of the California Flower Mart. CFM is one of the two businesses that each own a different part of the wholesale flower mart site. Kilroy has already struck a deal with the other business, the San Francisco Flower Growers Association—a deal that, however, is the subject of a lawsuit by one of the SFFG stockholders, which may explain why nobody from that organization showed up or at least spoke up at the open house.

CFM is still negotiating with Kilroy. Apparently one of the sticking points has to do with the location of parking for the office high-rise and cut flowers’ sensitivity to the gas called ethylene.

Ethylene, I’ve learned, is a colorless, odorless plant hormone that exists in nature. It’s also a byproduct of industrial production, including combustion. Ethylene hastens ripening, aging and eventually spoilage—thus its nicknames, the “death” or “ripening” hormone. The greatest source of ethylene in nature is plants and plant products. It’s ethylene that makes a tomato placed in a paper bag ripen faster. The produce industry uses ethylene to speed the ripening of bananas that are picked green.

But ethylene does not mix well with cut flowers. It makes their leaves turn yellow; their buds, petals, and leaves fall off; and their colors fade. Ultimately, it leads to their “premature” death.

The problem for the “modernized” Flower Mart that Kilroy has promised to build is that auto exhaust is a major source of ethylene, and the plans for the office tower at 575 Sixth Street reportedly call for a big underground parking garage.

Otsuka and his colleagues are worried that the ethylene generated by all those cars will waft up to the Flower Mart and damage if not destroy the cut flowers. “We’d prefer three stories of parking above the Mart,” he said. No way that’s going to happen. So what does that mean for the future of the Mart, its vendors and their customers? The question was never answered.

For the rest of the event, I stayed in the PDR circle, where discussion was moderated by Wertheim himself. “The goal of the plan,” he told one group of participants, “is to keep PDR in the area.” If we’re talking about the draft plan that’s posted on the planning department’s website, that’s simply untrue.

Echoing the draft document, the planners’ own handout says that of the approximately 5,6000 PDR jobs in the Central SoMa Plan area,1,800 are at risk of displacement by the proposed upzoning, which will remove the protections provided by current zoning. That number, Wertheim said, is “just a smidgen”—3%—of the 60,000 PDR jobs in San Francisco. But so what?

The best moment of the evening occurred when someone suggested that city planners be governed by the same sort of rules against perjury as lawyers. At that moment, veteran land use attorney and community activist Sue Hestor happened to be in the PDR circle, and she heartily endorsed that idea, noting that an attorney who committed perjury could lose his or her license.

Nobody observed that, unfortunately, city planners don’t have licenses, only license.

Previous articleBay Area marches for Ayotzinapa, because it had to
Next articlePublic power moves forward at City Hall. What will the mayor do now?