Last night, she said, “I told them, take this down: I did throw my chair.”

Yep: She threw her chair against the wall in frustration after the DCCC gutted a fairly moderate resolution calling for police reform, including better training and oversight of police shootings. The resolution endorsed the findings of the Public Defender’s Office Racial Justice Committee.

The resolution had been delayed and delayed after the Police Officers Association – yeah, these guys – opposed it. But Kelly, along with Kelly Dwyer, who recently had to leave the committee after she was rent-hiked out of town, worked for months to come up with an alternative everyone could live with.

“I spent three months to get this before the committee,” Kelly said. I had police officers agreeing with our changes. I had to turn it in ten days before the meeting, and it was in the agenda packet 72 hours ahead.”

That’s the process. But last night, something else happened: Member Joshua Arce introduced a “substitute” amendment that amounted to worthless mush. And the policy arm of the San Francisco Democratic Party went with the meaningless statement by a vote of 13-10.

“I didn’t even get an up-or-down vote on my resolution,” Kelly said. “I was so angry I was beside myself.”

This seems to be the new strategy the conservatives are employing at the DCCC – let someone work for weeks or months on a carefully worded resolution, then substitute another one that undermines it at the last minute.

It allows the members to say they voted on, say, police reform – without doing anything of the sort. And it allows them to avoid taking a stand.

It’s yet another sign of the takeover of the local Democratic Party not only by allies of developers and the real-estate industry but by people who are unwilling to show any backbone at all on anything at all.

“I ended up voting on a measure that means nothing,” Kelly said. “I threw it on the floor and stepped on it.”

Now let’s remember: Police Chief Greg Suhr wasn’t opposed to the resolution. The only real opponents were the hard-core old-school POA types, who don’t want any criticism of anything even the worst cops do.

You want to see profiles in courage at the Democratic Party? The original resolution put the DCCC on record in support of this plan from the Public Defender’s Office: 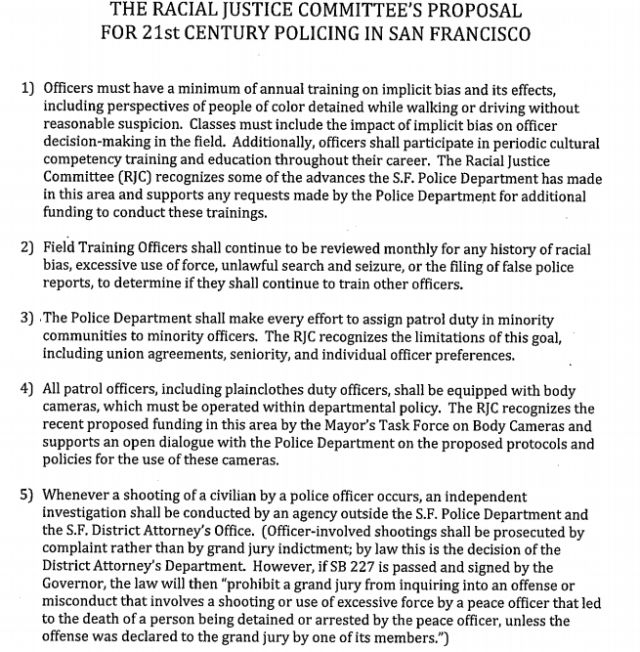 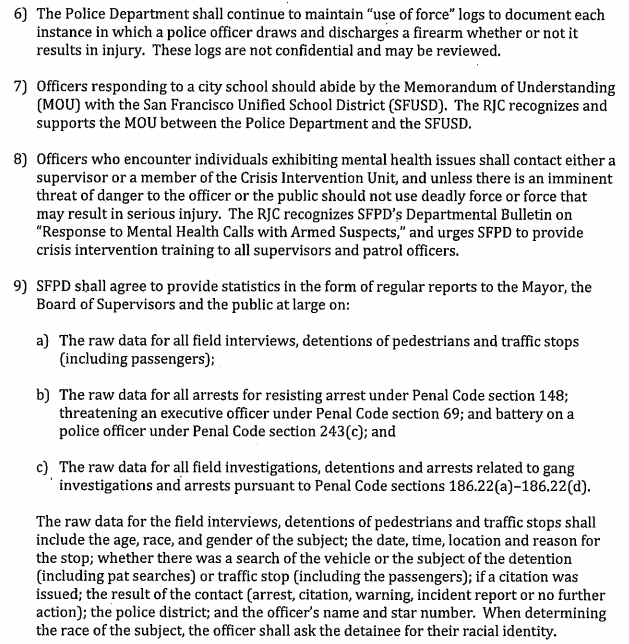 The final resolution deleted any reference to that plan and instead states that the DCCC “supports the San Francisco Police Department’s continued progress on 21st Century policing.”

Kelly said she figures she would have lost Engardio, Fazio, and maybe Dorsey if her resolution came up for a vote; they either respected the process or wanted to be counted as No votes on her proposal.

But that’s not how the Democratic Party works these days.