In Dockworker Power: Race and Activism in South Africa and the San Francisco Bay Area, labor historian Peter Cole uncovers the undocumented history of waterfront activism and its role in supporting transnational racial justice movements. In advance of his Sun/8 appearance at the Howard Zinn Book Fair, he sat down with us to talk about this history, and what it might teach a resurgent labor movement.

48 HILLS Early in the book, you talk about how the ILWU’s nearly all-white membership embraced integration and racial justice. This flies in the face of the commonly held belief that all trade unions were shackled by racism. What shaped the ILWU’s commitments? What did they accomplish?

Peter Cole No doubt, the history of unionism in America is shot full of racism but I’d hesitate to say that all unions are racist, especially in recent decades. However, there’s no doubt that, historically, many unions excluded or segregated African American workers as well as Asians, Mexicans and other Latinx, American Indians, women, and other so-called minorities.

Due to this history of exclusion, in the early 20th century, Booker T. Washington flat out encouraged black workers to scab. But there’s also a tradition of antiracism. As early as the 1880s, the Knights of Labor made a sincere effort to organize black and female workers and, since its founding in 1905, the Industrial Workers of the World made inclusion a bedrock principle, as I explored in my first book, Wobblies on the Waterfront: Interracial Unionism in Progressive-Era Philadelphia. Building on this foundation, in the 1930s a wave of new unions emerged that challenged rejected racism, sexism, and xenophobia. Among the most radical of these was the International Longshoremen’s & Warehousemen’s Union (ILWU).

The history of the ILWU, particularly its SF Bay Area branch—called Local 10—is an incredible example of antiracism in action. When established, literally 99% of SF longshoremen were of European descent or European immigrants. By the way, only 1% of San Francisco’s population was African American and only 3% of Oakland’s. Yet, from its inception, the ILWU and Local 10, the union’s flagship branch as SF was the West Coast’s busiest port, committed itself to racial equality.

Local 10 quickly integrated work gangs, guaranteed black members equal job opportunities, and actively fought racist treatment of its black members. When WWII created a massive labor shortage that sparked another wave of the African American Great Migration, more than a thousand Southern Black men soon entered Local 10. According to Cleophas Williams, who hailed from rural Arkansas, it was the first time he had met white people who weren’t racist. In one interview, he said that many Black members of Local 10 thought they had found utopia. That may seem hard to swallow but that’s what Williams declared. By the way, he went on to become the first African American elected president of Local 10 (and I had the privilege of getting to know him in his final five years of life).

My new book explores in great detail why the ILWU, particularly Local 10, proved so committed to racial equality. First, pragmatically, they wanted to avoid a repetition of past strikes in which black workers crossed picket lines. However, that alone doesn’t explain the ILWU position because many unions refused to embrace equality despite this seeming logic. Thus, there must be additional factors, including ideology.

Many longshoremen who founded the union, later dubbed “’34 men” for participating in the legendary “Big Strike of 1934” out of which the union emerged, were socialists. Be they Communists, Trotskyists, Wobblies, or some other Left flavor, they firmly believed that racial, ethnic, and other identities were far less important than one’s class identity. Understandably, many people point to Harry Bridges, the ILWU’s first and long-time president, as the explanation for the union’s commitment to equality. Of course, he deserves credit, but he’d have been the first to say that he didn’t act alone. A great many in the ILWU believed that all workers—regardless of race, religion, or nationality—shared common interests as well as common foes, namely the capitalist bosses.

48H You also discuss how Black dockworkers in Durban, South Africa used their power to undermine apartheid. Why has the labor story of the anti-apartheid movement been so under-documented before your book?

PC Indeed, I argue that the Durban dockworkers were pivotal to the struggle against apartheid. They started flexing their muscles, by striking, as far back as the late 19th century and continued to do so, repeatedly into the late 1970s. Since Durban was South Africa’s primary port city for both exports and imports, these dockers mattered greatly. Perhaps their most important actions, however, remain underappreciated—specifically how they sparked and shaped the Durban Strikes of 1973, the largest protests by Blacks and Indians since the repression of the early 1960s created a so-called “quiet decade,” i.e. little anti-apartheid activism.

In 1969, Durban dockers struck, they threatened to so in 1971, and struck again in late 1972—and despite mass firings, police violence, and further state repression. These were the largest strikes among black South Africans in a decade. And, less than two months after their 1972 strike, Black workers downed tools and launched what became known as the Durban Strikes in which tens of thousands joined in the largest wave of strikes, among workers of color, in South African history up to that time. From then onward, there was no further quiet though overthrowing apartheid took another twenty years.

I wouldn’t quite say that labor’s role in the struggle is under-appreciated by historians of South Africa. In fact, I use that fact to point out how far too many people in the United States fail to appreciate how important unions have been to advancing racial equality in the States. However, I do contend that the specific role of Durban’s dockworkers remains under-appreciated in launching the Durban Strikes, though I’m not the first to suggest that. I do hope that my book heightens the appreciation of how important Durban dockers were to the long struggle against apartheid, in many ways the greatest global social movement of the late 20th century. 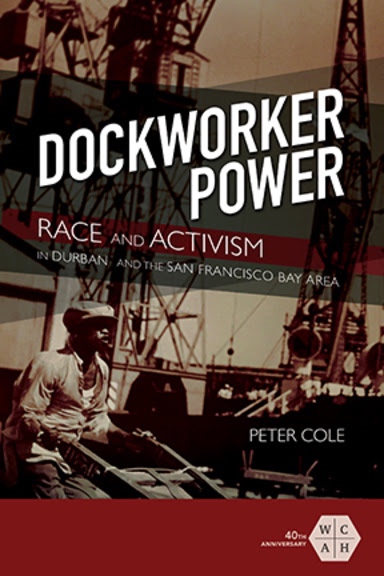 48H: You buck an academic trend of presenting race and class issues as polar opposites. What is useful to you when thinking through these dynamics?

PC: I’ve been studying the links between struggles for worker power and racial equality for 25 years and counting. And, for 25 years I’ve been tired about the race-class debate. It’s a false dichotomy and only undermines our efforts to overcome racial capitalism. What I mean by that term is that capitalism and white supremacy arose, in tandem, in the 1600s and 1700s and have been inextricably linked ever since, along with its third ugly head, imperialism.

Socialists who ignore the reality of race and racism do so at their peril. So, too, those who think that capitalism can be anything other than racist. Simply put, the majority of the world’s population and working-class peoples aren’t white. Yet, it’s a sad fact that many (far too many) white working people continue to downplay the importance of racism and xenophobia. For me, though, I’d rather spend my time examining those workers and unions that understood that it’s not either/or but both and always.

We humans need not fixate on one single issue; we can simultaneously attack race and class oppression. But those of us who are relatively privileged, in this case white folks, must be particularly aware of the need to combat racism (sexism and xenophobia) in our ranks. The recently deceased Noel Ignatiev, who worked in Chicago steel mills for two decades before getting his PhD in History from Harvard, called such white people “race traitors.” Like many others, I find that term quite insightful.

48H With the recent strikes and unionizing attempts, it seems like organized labor could be poised to make a comeback. Are there any lessons from your book that you would want to highlight for today’s rebel workers?

PC There sure are some lessons! I don’t only study the past because it’s so fascinating. I also do so, like Howard Zinn did, because I want to understand the present in order to build a better future. The first lesson should be obvious to those who read the book or listen to me talk about it: the greatest power ordinary people possess is when they’re organized, especially in unions, and that our greatest weapon is the strike. As the Wobbly leader Big Bill Haywood said, “If the workers are organized, all they have to do is to put their hands in their pockets and they have got the capitalist class whipped.” A century on, that hasn’t changed.

I live part of the time in Chicago and the recent Chicago Teachers Union’s strike just reminded us, once more, what is possible. In the short term, better earnings, fairer and safer workplaces, and improved conditions for students and the community since they engaged in “bargaining for the common good.” In the longer run, strikes build working class power which, I believe, is the best way to attack racism, sexism, homophobia, and nativism as well as the economic inequality that wreaks havoc on our lives and the planet.

Also, since resources are limited and certain industries more pivotal to capitalism than others, we have to be strategic. In other words, where should we prioritize? Dockworker Power makes clear that the answer is shipping because 90% of the goods we consumer still move by ship for at least part of their journey.

More broadly, we should strive to organize workers up and down the entire supply chain. However, dockworkers aren’t more important, necessarily, than railroad workers, truck drivers, and warehouse workers. They’re just far better organized so have more power (and higher incomes, better conditions, and so on). I’m not always a fan of the Teamsters but when they refused to move scab cars during the recent UAW strike and refused to make deliveries to Chicago public schools during the teachers strike, they demonstrated working class solidarity which translated into real power.

Dockworkers in Durban and the SF Bay Area have long histories of such activism, which I’ll be discussing at the Howard Zinn book Fair this Sunday as well as next week with the Tech Workers Coalition, California Historical Society, and Labor organizing committees of the East Bay and SF DSA chapters.

Peter Cole speaks at the Howard Zinn Book Fair Sun/8 at the Mission Campus of City College of San Francisco with Charmaine Chua and Stacey Rodgers, 2:15 in Room 319.

Repulsion to Trump is expanding beyond the liberal enclaves.
Read more
Sponsored link