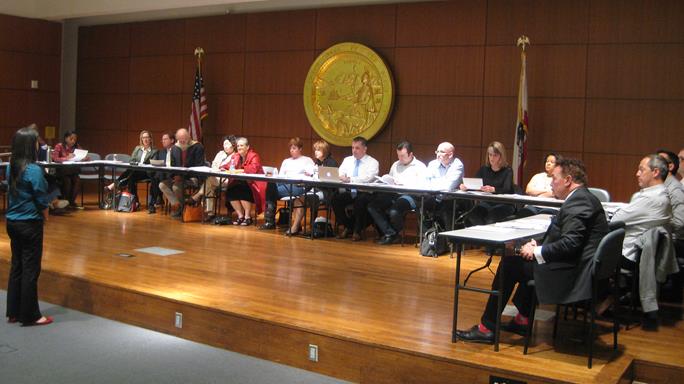 The DCCC listens to testimony at its endorsement meeting

March 12, 2014 — To the surprise of some political observers (um, me), the San Francisco Democratic County Central Committee voted tonight to side with the real-estate developers and reject Prop. B, a measure that would require a public vote for any project that exceeds existing height limits on the waterfront.

The vote was 13-12, and it included some surprises: Sup. Malia Cohen, who is facing a re-election challenge from a Prop. B ally, voted to support Prop. B – and Sup. David Chiu, who was a leader in the fight against 8 Washington, abstained, in effect giving the developers the edge.

“This shows that the real-estate industry now controls the San Francisco Democratic Party,” Prop. B author John Golinger told me after the vote.

Both sides had plenty of support in the room, and combined with a contested judicial race, public comment on the party’s endorsements took up more than 90 minutes. The building trades unions were out in force, arguing that Prop. B would hurt job growth.

Golinger, in his remarks to the panel, noted that the measure wouldn’t actually stop any projects: It would just require a vote of the public if that project (like, for example, the Warriors arena) required a special exemption from the height limits that the city has established over the years. “There have been lots of votes on waterfront projects,” he said, including AT&T Park. Now, of course, the Giants, who won that election, want to stop this measure, which would mandate another public vote on the team’s ambitious development plans for a lot near the ballpark.

Tim Colon, who is suing to take Prop. B off the ballot, handled the No argument, and he started off by decrying the vote on 8 Washington. Not what one might call a good tactical message, since the DCCC opposed that development, as did a huge majority of the voters.

Then he ran off a long list of all the waterfront development that would be threatened by the measure – an impressive list. In all, $8 billion worth of projects on Port land would be “delayed, reduced, or abandoned” if Prop. B passed.

Which I could only take to mean that all of those projects that don’t meet current height limits and will need spot zoning.

He also said that the measure would undermine housing construction: “We have to produce housing to keep this a diverse city.” But nobody with any sense thinks that the luxury highrise condos that developers want to build on the waterfront will do much of anything for diversity in San Francisco.

Let’s be honest: When the Port and developers wanted 8 Washington, they were all for ballot-box zoning. When they want the freedom to go through a planning process that DCCC member Rafael Mandelman noted “people in the neighborhoods think is rigged” – then they don’t want the voters to have a say.

Chiu said he wasn’t prepared to vote either way on the project, because “there hasn’t been enough analysis” of the impacts the measure would have. Under the rules of the party, it takes a simple majority to prevail on an endorsement – and an abstention lowers that threshold because it doesn’t count as a vote. So his abstention made the 13-12 vote possible.

Alix Rosenthal, who often votes with the progressive, also abstained.

Leah Pimentel, who had opposed 8 Washington, voted No.

It was odd, coming the day after the state party chair, John Burton, announced his support for the measure. But it’s clear that, under local party chair Mary Jung, the progressives no longer control the Democratic Party in one of the most progressive Democratic cities in the nation.