Raymond Chow’s lawyers haven’t proven that the mayor is involved in anything illegal. But damn, this doesn’t look good

AUGUST 4, 2015 – I was pretty sure what the lawyers for Raymond “Shrimp Boy” Chow were going to do as part of their defense: They were going to argue that Chow was just a small player in a much-larger corruption scheme, and seek to prove that the feds ignored the actions of a lot of other prominent San Franciscans while selectively focusing on him.

They released the first salvo today, filing a motion in court to dismiss all the charges on the grounds of selective prosecution. The Examiner broke the story (and isn’t it sad that all hell has broken loose at that paper and its SF Weekly cousin, when this city clearly needs real reporters who dig into documents?)

The Chron has pretty much dismissed the allegations against the mayor, and I agree that there is nothing specific in the FBI documents attached to the filing to prove that Lee did anything wrong.

(The Examiner uploaded the motion from Chow’s lawyers but not the attachments; KQED has uploaded them all here.)

But the whole filing paints a sad, sordid picture of San Francisco politics and suggests once again that the legacy of Willie Brown and Ed Lee is one where underlings are taught to do what’s necessary to bring in the money for campaigns and to build political power – and the public interest isn’t really a factor.

The worst, I think, is the FBI filing that quotes Zula Jones, who was once indicted for rigging contracts (the charges were later dropped) discussing how things really work in the city:

“We pay to play here. We got this. … [Lee] is a moderate business focus mayor. He was pretty much trained and developed by Willie Brown, the same as myself and we were trained to get the job done.”

The documents show that the mayor met with Jones and Keith Jackson (and why on Earth was he doing that?) and a couple of undercover FBI agents, at 945 Front Street (again: why?) and there was discussion of campaign money.

The legal filing alleges that the “FBI alleged in discovery that Ed Lee took substantial bribes in exchange for favors,” but the discussion is mostly about donations to retire his campaign debt. The undercover agent allegedly raised $10,000 for Lee; the donation limit in San Francisco is $500.

The mayor , according to the FBI documents, discussed business development.

That’s not illegal. But it’s a bit unseemly for the mayor of San Francisco to be hanging out with some of the more sleazy characters in the city’s political underbelly. 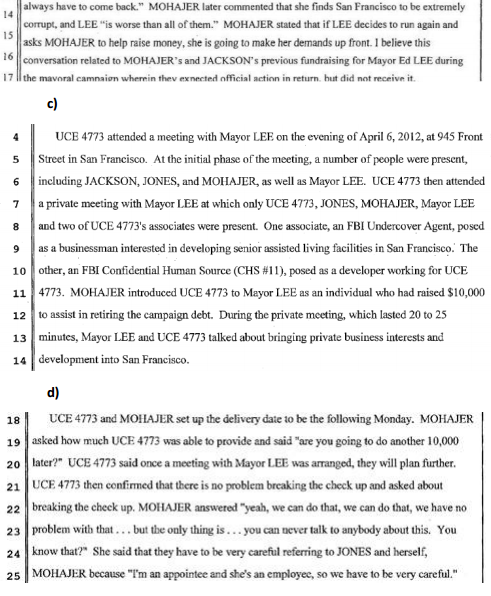 The FBI files show that then-Sup David Chiu wore a wire provided by the feds when he met with Chow, making him part of the undercover team that collected evidence leading to the indictment. 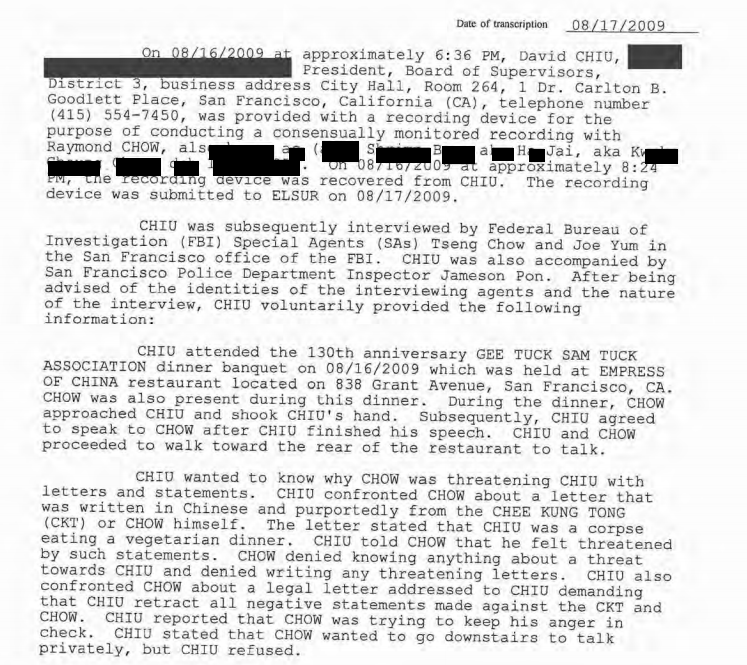 And then there’s Sup. London Breed.

In Breed’s case, according to the filing, Derf Butler, a politically connected businessman who the documents say worked with Jackson for Yee, told an FBI source that he “pays Supervisor Breed with untraceable debit cards for clothing and trips in exchange for advantages on contracts in San Francisco.”

Breed completely denies that. In a statement she released today, she says:

I learned long ago that you can’t control what other people say about you.  And that’s especially true when you serve in public office.

The files do show that Rev. Amos Brown, a former supervisor, at one point tried to get Breed to back off from her investigation into the actions of Henry Alvarez, who was later fired as head of the Housing Authority. 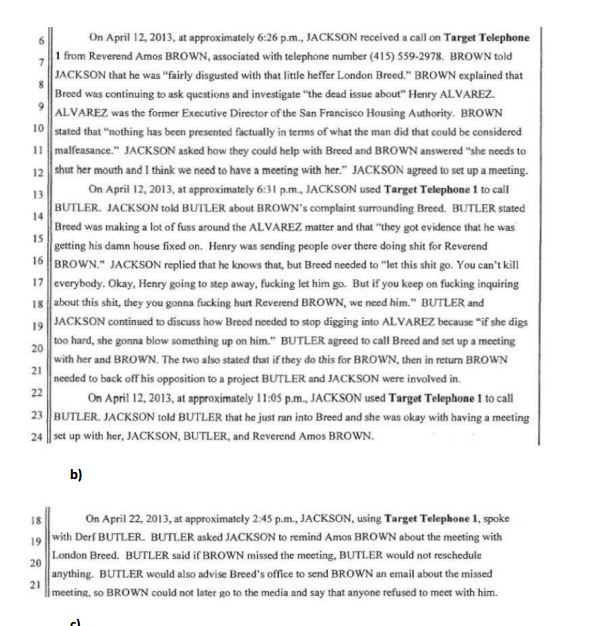 Jackson’ phone was being tapped, apparently, and at one point Brown called him to say he was “fairly disgusted with that little heffer (sic) London Breed.” Alvarez,  the documents allege, was sending Housing Authority maintenance workers to do repairs on Brown’s house.

Jackson spoke to Breed and told her how important Brown was to the African American community. Breed said only that “I got you, Keith.”

Breed and her office have not yet returned my calls.

There is more, much more: The FBI met with Sululagi Palega, also known as “the Chief,” who “was very cautious about conducting any type of illegal business because he had personal relationships with Mayor Ed Lee and Police Chief Greg Suhr.” Palega, who allegedly was driving a city car, later gave the undercover FBI agent a handgun in a See’s candy bag.

The overall picture is not pretty. The FBI crawling all over City Hall, the mayor associating with people who turned out to be part of a serious crime ring, the assumptions among many of the targets of the investigation that they can just get money for local pols and then get what they want … The Lee Administration hardly comes off looking clean.

There are, indeed, out-of-control prosecutors who go on witch hunts. We have seen that again and again. The US attorney who oversaw all of this, Melinda Haag, was hardly a crusading progressive. And as Breed has noted, many of the targets seem to be African Americans.

But please: No comment out of the Mayor’s Office? No attempt to say that some of the people he’s been associating with were, in retrospect, not exactly the type you would hope an honest mayor would be involved with?

Lee ran for office in part because Willie Brown and Rose Pak told him that if he didn’t run, Leland Yee might be elected. (Ridiculous; Yee came in at the back of the pack. Without Lee, Dennis Herrera and John Avalos were the top contenders.)

So if the mayor had concerns about Yee, why was he hanging out with Yee’s associates? Why, other than an insatiable need for campaign cash, was he even talking to Keith Jackson and Zula Jones?

Haven’t we had enough of this climate of corruption?

Big Tech gets to break the law with impunity; why is the city hassling the folks on the street? Plus: The new DA's first weeks are a disaster, but the Chron doesn't seem to care.
Read more
News + Politics

There's widespread agreement that bicyclists should treat stop signs as yield signs. The governor has rejected that proposal in the past.
Development

New supe says he isn't familiar with the issues, makes no commitments for change.
News + Politics

Big Tech gets to break the law with impunity; why not the folks on the street? Plus: The new DA's first weeks are a disaster, but the Chron doesn't seem to care.