48 hillsIndependent San Francisco News + Culture
Uncategorized Some reality about the Mirkarimi vote -- and the... 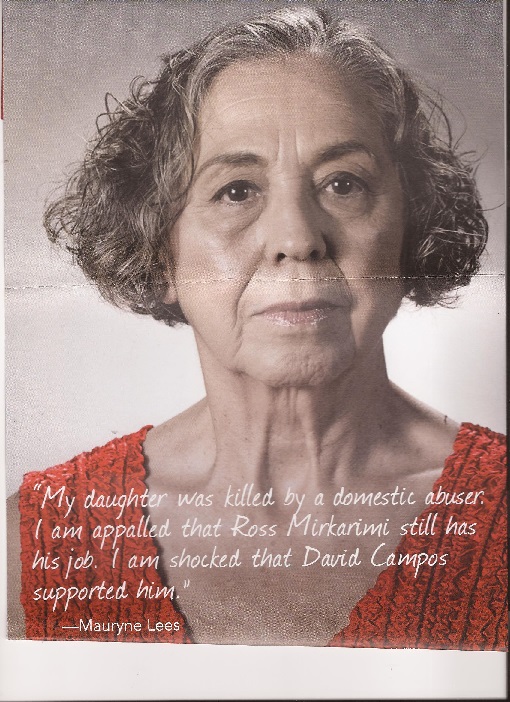 MAY 14, 2014 — Our local billionaire tech lord has injected the Ross Mirkarimi vote into the 17th Assembly District race – in a really vicious way. He has just sent out a flyer that equates Mirkarimi’s domestic violence incident to murder: “My daughter was killed by a domestic abuser,” the caption says. “I am appalled that Ross Mirkarimi still has his job. And I am shocked that David Campos supported him.”

So let me remind everyone of some important political context and history.

First: Conway is opposing Campos over issues like the Twitter Tax Break and the Google Bus Project. Mirkarimi is just a tool.

Second: There are good, reasonable people who think what Mirkarimi did was awful, inexcusable, deserving of criminal action and punishment – and still didn’t think the mayor had the right to remove him from office.

Sup. Jane Kim, who is a friend and ally of Sup. David Chiu, took that position. She was no fan of Mirkarmi, and later said she would support a recall campaign against him. But she didn’t vote for removal – for the same reasons Campos didn’t.

I’m not going to defend Mirkarimi. He was beastly and at least somewhat physically violent toward his wife. He went through the criminal justice system, as he should have, and I think the restraining order, plea arrangement, and sentence were (at the very least) consistent with what any first offender with a clean record would have gotten.

There are absolutely incidents of domestic violence that lead to murder. Clair Joyce Tempongko was killed by a batterer who didn’t get sent to prison. I don’t think anyone reasonable in San Francisco thinks that what Mirkarimi did was even close to equivalent.

But the question before the Board of Supervisors was never about his guilt or innocence. It was about under what terms the mayor, citing very vague and broad language in the City Charter, should be able to remove from office an official elected by the people.

We already have a remedy for bad office holders. It’s called the recall, and it’s right in the state Constitution. At the time, I ran this piece in the Bay Guardian by Calvin Welch, who has never endorsed or supported Mirkarimi for anything.

There were voices for restorative justice, like the Harvey Milk Club, but they were largely ignored in the mainstream press.

What’s important in going back over this vote is that many board members were torn. It wasn’t an easy call. Denounce Mirkarimi for what he did? Of course. Support a recall effort, if Ron Conway had been willing to fund one? Many would have done that.

But this was different. This was about the Charter, and mayoral power, and the idea that some mayors could and would badly abuse this privilege.

And, of course, there is no provision for suspending ousting the mayor, no matter what sorts of things he does. (If a supervisor had sex with a subordinate when she was drunk, would that be official misconduct? Maybe. If the mayor does it? Never mind.)

The board, to its immense credit, did what it was supposed to do: Deliberate and discuss, in the role of a judicial body, whether the prosecution case presented by the mayor was adequate under the Charter to warrant removal.

I think most of the supervisors took this seriously. I think they listened to the evidence, gave both sides a fair chance to make the case, and tried to do the right thing. I was proud of the board that day.

And while Campos and Chiu disagreed, and this has been an issue in the campaign (a legitimate issue), they’ve mostly kept the discussion respectful. As I said, a reasonable person could easily have seen that evidence and come down on either side. I don’t fault Chiu for his vote; I don’t fault Campos either.

One former judge at the time told me that if the case had been in court, a ruling either way would have stood up: “If I had ruled in favor, I would not have been overturned [on appeal]. If I had ruled against, I would not have been overturned.” On the merits, the legal merits (and Chiu, Campos, and Kim are all lawyers with degrees from top schools) there was room for fair disagreement.

But let’s keep in mind: From a purely political stance, voting with the mayor, to remove the sheriff, was always the easy position. If you were interested in playing politics, thinking first and foremost about your career, the only possible vote was for removal.

There was all this talk about Mirkarimi being a “friend” of some of the progressive board members, but that’s not really true. Mirkarimi wasn’t that close to his colleagues; he was something of an independent loner on the board. If he’d been more friendly to the other supes, he would have been elected board president over David Chiu.

In fact, a lot of people advising both supervisors at the time told me they thought it was crazy not to just throw out Mirkarimi and vote with the mayor. Typical comment: “you’re going to risk your political future – for the new sheriff?”

Mirkarimi had a job that a lot of San Francisco residents don’t understand or care much about. He had no political capital, no big-money allies. The press had been relentless: He was a “wife beater.” There is nothing that Mirkarimi could have done or offered the supervisors in exchange for their support.

There was no powerful constituency backing Mirkarimi. Aaron Peskin, then the chair of the Democratic Party, who had worked hard to get Mirkarimi elected sheriff, called on him to resign. A few people, including the Milk Club and former Mayor Art Agnos, were trying the help the embattled sheriff. But in the real world of politics, Campos would have lost almost nothing by voting to throw him out. It would only have helped his political future.

So it was an act not of friendship or political allegiance but of a sense of responsibility to follow the law – and to avoid the precedent of a mayor overreaching his powers – that convinced Campos, Kim, Sup. John Avalos, and Sup. Christina Olague to vote against his removal.

That doesn’t sound very good, and it’s hard to put in a soundbite or a mailer, but it’s true: If Campos had followed the political advice of many of his friends and supporters, he would have done the easy thing, and Conway would have to find something else to attack with. (Mirkarimi might have survived anyway; it took nine votes to remove him, and there were three “nos” even without Campos.)

Olague lost her job shortly after, thanks in part to Conway. Kim has made her peace with the tech sector and the mayor, so she doesn’t have to face this kind of opposition. Avalos isn’t running for anything right now. So it’s falling on Campos.

There were clearly members of the board who believed Mirkarimi should not be in office, and they voted the way they saw the facts. Good for them.

After the vote, Campos told me he felt he had no choice but the follow the rules. “At least I can look at myself in the mirror in the morning,” he said.

Kim told me today that the vote “wasn’t about whether you liked Ross or not. I took a principled position. Reasonable people could disagree on this one.”

You don’t have to agree with him or support Mirkarimi to understand that this was an act of political principal, one taken at great political and personal expense. How often does that happen in politics? How many other elected officials do that sort of thing? Whether you agree with his vote or not, you have to wonder: Don’t we want people in office who do what they think is right, no matter what the cost?

And when you see the attacks coming down, you can recognize why there are so few of them.

As for the mailer? Well, Campos has a long list of activist women supporters, and many of them told me this attack was off base. “That is such a long, long road to get to Campos,” School Board Member Kim-Shree Maufas said.

Added longtime labor activist Connie Ford: “David Campos is someone who will fight and not compromise on the issues I care about the most — closing the economic divide, good jobs, affordable housing and access to health care for all. What Ross Mirkarimi did was wrong. He has paid the price and done his time. I agree with the teachers, the nurses, and the hotel workers in supporting David Campos.”