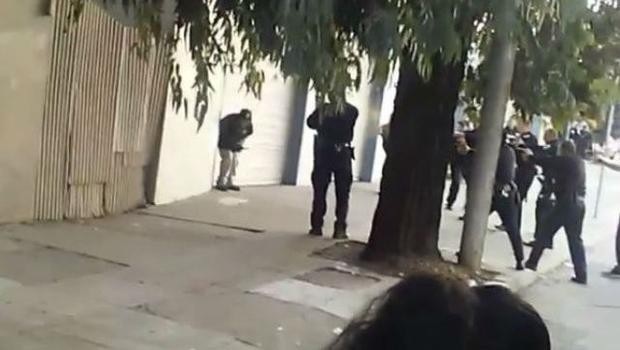 By Tim Redmond
January 21, 2016
Share on FacebookShare on TwitterShare on LinkedInShare on RedditShare on Email

There were two fundamental problems with the supes hearing on police violence today: Chief Greg Suhr decided not to show up – and for all the talk of policy changes that the city might need to implement, there was little discussion of accountability.

How is it, Sup. David Campos asked, that the chief is able to make misleading, sometimes inaccurate statements to the public after shootings –claiming, for example, that the killing of Mario Woods was justified before even the earliest facts were in?

How is it that the officers who killed Woods, in what seems from the video to be a very dubious shooting, are still on the payroll? “That sends a horrible message,” Campos noted.

The behavior of the Police Officers Association also came up, with a number of public speakers saying they felt intimidated when a large crowd of officers marched into the Police Commission last night. “If 70 young black men had done that, we would have been tagged as a gang,” one person noted.

Sup. John Avalos argued that “it also looks as if the department is afraid of the POA.”

The numbers presented were alarming. San Francisco, Sup. Malia Cohen noted, has had 37 police shootings since 2012, and every one of them has been deemed justified.

Aaron Zisser, a police-practices expert who is a former US Justice Department official, said that people with mental illness are 4.5 times more likely to be arrested, and that, nationwide, between 15 and 25 percent of the jail population is mentally ill. “In some jurisdictions,” he testified, “fifty percent of all police shootings involve people with mental illness.”

Black men between the ages of 15 and 19 were 21 times more likely to be killed by the police than white men of the same age group between 20101 and 2013. African Americans are six percent of the population and 40 percent of those shot by the police.

He talked of the need for more “self-examination” in policing, saying that too much of modern law-enforcement is based on the “warrior model – the war on crime, the war on drugs.”

Surh, who typically attends these types of hearings, instead sent Greg Yee, the captain of the training division, who had lots of positive words about the way new recruits should be taught. “In the United Kingdom [where most cops don’t carry guns] the sanctity of life is primary,” he said. “We are seeing a shift in culture at the Police Academy.”

The director of the Office of Citizen Complaints, Joyce Hicks, echoed some of those comments and offered a list of policy suggestions.

Cohen suggested that, in the wake of the recent wave of officer shootings of young men of color, “It seems we’re being very reactive. The Mayor’s Office has been a little late to the party.”

And, she said, “people have reached the breaking point. That’s why they are stopping traffic”

None of the expert testimony addressed the issue of current officers, with current training, ignoring current rules, and escaping accountability.

As Avalos said at the end, “These are nice and kind words, but until we have a sense that there are consequences” for cops, there will be no real change.

Previous articleHolding the cops — and their union — accountable
Next articleThe regional government merger: Is anyone asking why?