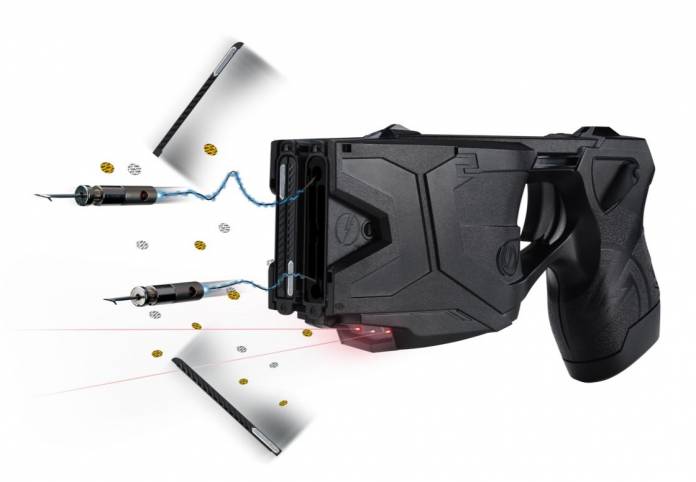 The San Francisco Police Officers Association – the folks who have opposed every major effort at reforming the department – has put up $80,000 so far to pay for signature gathering for a ballot measure that would completely undermine civilian oversight of local policing and mandate that the city spend millions of dollars buying Tasers for every officer.

The measure is stunning both in concept and in policy: It would allow the POA to force on the city a weapon that the Police Commission has already debated for years and has agreed to phase in slowly, with proper oversight.

It would require the mayor and the supervisors to fund the purchase of the controversial devices with additional money from the General Fund. It would override the ability of the commission and the chief to set policy for how and when Tasers can be used.

And it would directly contradict the approach that the chief, the commission, and many community advocates have come to accept as the basis of the department’s Use of Force Policy: The notion that officers should first try to de-escalate and defuse situations before resorting to potentially lethal weapons.

There are paid signature-gatherers on the streets today with petition for what’s called “The Safer Policing Initiative.” According to records with the Department of Elections and Ethics Commission, it’s sponsored by the Community Alliance for Jobs and Housing, a downtown-backed group that includes some of the more conservative labor unions. Yimby Action is a member. So is SPUR.

Gary Delagnes, the former president of the POA, who has a history of defending racist and violent cops, is the group’s secretary.

Laura Clark, executive director of Yimby Action, told me that her group is not supporting the measure:

We have not voted to support that initiative, and we sporadically take different positions than the coalitions we are a part of. I think that’s pretty normal.

Personally, I’ve seen data that indicates that when police forces get tasers it does not bring down the number of shootings, but instead creates a new category of situations that are now tase-able, that used to be resolved non-violently. I think that analysis is compelling. I think there might be room to move from guns to only tasers, or to do a program that involves a lot more training and linking the tasers to mandatory reductions in the use of guns. Because these provisions are not in the current initiative, I am not supporting it.

I haven’t yet heard from SPUR. [UPDATE SPUR’s executive director, Gabriel Metcalf, told me that the POA ballot measure “will be going through the SPUR ballot analysis process, along with all the other ballot measures. We don’t have a position till then.”

The city’s been debating tasers for years. For the most part, the Police Commission has been wary about the devices, which have a long history of misuse and are, in fact, not “non-lethal.”

In the wake of a series of police shootings that led to the resignation of former Chief Greg Suhr, the commission sought input from national experts, who reached a series of policy recommendations. Among them – and at the top of the list of most modern policing policies – is the idea that officers should be trained in de-escalation techniques and should seek solutions to conflicts that don’t involve shooting anyone.

The current chief, Bill Scott, agrees with that concept.

The Police Commission agreed this fall to allow officers to carry tasers – but not until the de-escalation program and the new Use of Force policy is fully implemented. That would be December, 2018 at the earliest. And the Board of Supes would still have to allocate money for the stun guns.

I’m against giving cops tasers under any circumstances; they’ll be abused and wind up hurting and killing people. But at least the commission took a measured, reasonable approach.

This initiative would throw that entire community process, and the idea that a civilian commission gets to decide on Use of Force politics, out the window.

It would also take away from the supes the ability to decide that this is not something the city wants to prioritize for funding.

But between the POA’s money and money that I suspect will come in from Taser International, the company that makes the so-called Conductive Energy Devices, this measure could pass – unless every elected official and credible community group in town comes out against it.

So far, the response from City Hall has been pretty quiet.

The initiative states that the department must “purchase enough CEDs to provide every uniformed officer with a CED.” The money would have to come from the General Fund – so this is, in effect, a police set-aside.

The officers – on the basis of a ballot measure – would have the right to use tasers whenever they believe someone is “actively resisting” or “exhibiting any action likely to result” in injury to an “officer, themselves, or another person.”

The Police Commission guidelines are more likely to state that a taser can only be used after de-escalation techniques have been attempted and officers who are trained to defuse situations and deal with mentally-ill people have been brought onto the scene.

The policy that would be mandated by this initiative – which could not be changed except by a four-fifth vote at the Board of Supervisors – would allow individual officers wide discretion to zap suspects.

I’m pretty sure that in the 35 years I’ve been covering San Francisco, the voters have never approved a ballot measure that allows the cops to override civilian policy on the use of lethal force. It’s frightening to think about what could happen if this succeeds.

And so far, there has been very little news media attention.

Keep this in mind when you meet someone on the street with a ballot measure that talks about “safe policing.”