The latest Housing Balance Report comes before the Board of Supes Land Use and Transportation Committee Monday/10 and the news is as bleak as ever: In the past ten years, San Francisco has built 6,577 affordable housing units – and lost 4,263, mostly to evictions and Tenancy in Common conversions.

That means every time the city creates two affordable units, it loses one.

“There are a lot of numbers thrown around these days about housing,” Peter Cohen, co-director of the Council of Community Housing Organizations, said in a press statement. “Here, in this Housing Balance Report, authored by the Planning Department we have the real story, from the city’s own building permit data, planning data, and Rent Board data.”

The message: SF is never going to solve its housing problem unless the city can stop allowing existing affordable housing to be taken off the market. It’s far, far cheaper to protect existing rent-controlled housing than to build new housing.

The report, which you can read here, is just the latest evidence of the failure of city housing policy. San Francisco is, of course, limited by state law – the city can’t ban Ellis Act evictions or impose rent controls on vacant apartments. Instead of fighting to change those things, our state legislators are pushing to mandate more market-rate housing.

But the city now has a huge budget windfall – and the supes will be discussing how much of that money can go to implementing Prop. C and buying up small sites that are vulnerable to Ellis evictions and TICs.

The committee also finally gets to consider the proposal by Sups. Ahsha Safai and Aaron Peskin to ban employee caefterias from new office buildings. The idea is to help local small businesses by encouraging tech workers to go outside of their office cocoons and actually buy lunch and interact with the community where they work.

The Budget and Finance Committee will hear a report Thursday/13 from the Office of the Treasurer and Tax Collector on the findings of the Municipal Banking Task Force. The task force has issued a draft report, which you can read here. There are models that require a public subsidy, and models that make a pretty fast profit.

The report is primarily financial, and doesn’t spend much time looking at what a municipal bank could do, for example, to finance affordable housing. But it’s clear that the concept is feasible, and could radically change the way the city and a lot of residents interact with the financial sector.

The meeting starts at 10am; the hearing is at the end of the agenda.

Mayor London Breed will appear at the full board meeting Tuesday/11 to begin (public) discussions over how the city should spend the $181 million in state money that’s suddenly on the table. The mayor has suggested that much of that funding should go to implement Prop. C (which she opposed). Some, including incoming Sup. Matt Haney, say that since it’s education money, some should go to increase teacher pay at SFUSD.

This will be the first time the supes and the mayor together have an open discussion on the topic. It’s why we have Question Time.

The board will also consider, in a special Committee of the Whole, whether to put a Charter Amendment on the Nov. 2019 ballot to preserve free City College for the indefinite future. We’re talking about a budget set-aside, and a lot of supes don’t like budget set-asides, which I understand – but in this case, the voters passed a measure that should (assuming the city survives the court challenges) provide a steady stream of revenue for the $15 million a year or so it would cost to allow low-income and working-class San Franciscans to get an education.

And the board will consider legislation that seeks to prevent the owners of single-family homes and condos to use massive rent increases as a tool for eviction – like this. 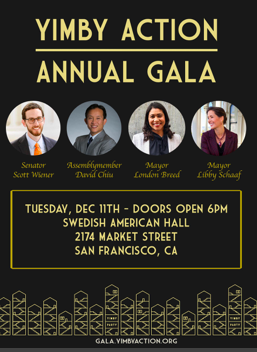 The Yimbys lost big-time in the November SF election – but that doesn’t mean they have lost the political support of some of the city’s most powerful officials. It’s worth noting that among the hosts (and presumably speakers) at the Yimby Action annual gala Tuesday/11 at the Swedish American Hall are Mayor London Breed, state Sen. Scott Wiener, state Assemblymember David Chiu, and Oakland Mayor Libby Schaff.

All are now part of the Yimby agenda.