Chiu’s attack on Campos is just factually wrong. Here’s how. 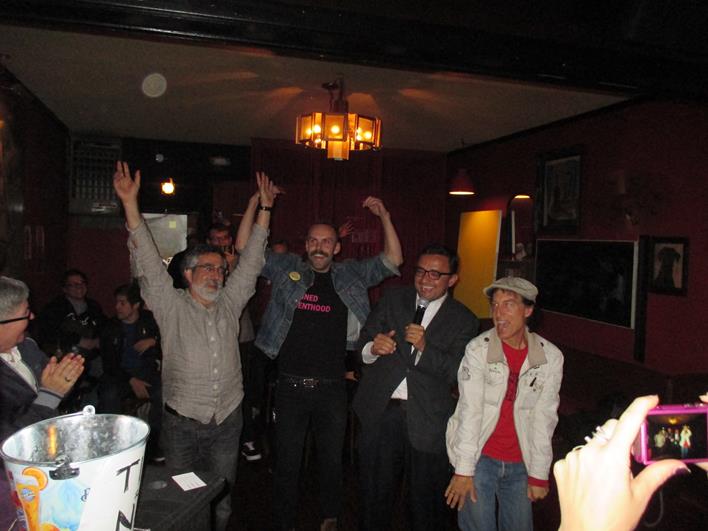 Aaron Peskin, shown here partying with Tom Temprano, Campos, Tommi Avicolli Mecca, and Gabriel Haaland, is a Campos supporter. So are many others, including Tom Ammiano, who is left off a Chiu attack piece.

MAY 8, 2014 – Political campaigns are not about accuracy. People throw around claims and charges and allegations that have only the thinnest connection to the truth. When the truth is there, it gets bent beyond recognition. We all know this.

And when it’s a heated race, like the one between David Campos and David Chiu for the 17th Assembly District, spin beats facts every time.

The Campos campaign, for example, has challenged Chiu over his former company’s ties to Republicans. Yes, it’s true that Grassroots Enterprises, which Chiu helped found, licensed its software to some GOP clients. It’s also true that Chiu started a tech company that was looking for business, across the spectrum, and most progressives seemed to think this was fine when he was running for supervisor. Whatever – it’s politics.

But a mailer that Chiu’s campaign just sent out called “GET THE FACTS BEFORE YOU VOTE” is just so blatantly wrong and such a bizarre smear that it’s worth a specific response.

The flyer is just a three-column, small-type comparison of the two candidates, and some of it is typical campaign fodder. It state that Chiu “helped created tens of thousands of jobs in diverse industries” and Campos “voted against policies that would create tens of thousands of jobs.” What’s that about? The Twitter tax break. Chiu supported it, Campos didn’t. Chiu claims it created tens of thousands of jobs – and that voting against it meant voting against jobs. Silly; there were good reasons to oppose the tax break, and good reasons to say in retrospect that creating jobs for tech workers who moved to the city to take them has caused as much harm as good. Whatever – it’s politics.

Chiu goes after Campos for opposing the Lennar project and the ParkMerced deal, saying that Campos was against creating housing. Campos has gone after Chiu on the same issue, saying Chiu voted to demolish rent-controlled housing at ParkMerced. Again: Whatever.

But then it gets really crazy.

Chiu’s flyer says that Campos “Failed to address public safety concerns at 16th and Mission after unprecedented homicides, stabbings, and muggings.” The footnoted sources for most of the Chiu allegations are news stories; in this case, the only source is “cleanuptheplaza.com,” a website linked to a developer who wants to build luxury housing at that corner. The charge is also factually untrue – Campos has been working on a lot of levels to address crime in the Mission – in part by working to get kids out of gangs and into jobs.  He didn’t sign onto a plan to clear low-income people out of the plaza; this is a problem?

I texted Chiu and asked him if he thought his board colleague really ignored public-safety concerns, but he hasn’t responded.

Well, let’s go back to the source. Nobody will actually type the urls that are in tiny type on the Chiu flyer into a browser and see what Chiu is talking about, but I did. This allegation comes from a 2009 story in SF Weekly that’s actually rather flattering toward Campos. Read it yourself and see. The story says the Campos is an independent progressive:

He seems to profess membership in an Obama-era breed of left-wing radicalism, suspicious of purely ideological approaches, yet interested in comforting powerless people with whatever tools happen to work.

Yes, the story notes, Campos worked for a year at the law firm of Arnold & Porter, a big, big outfit in DC that had hundreds of lawyers and thousands of clients. Among them were tobacco companies. Among the clients of every big firm in DC those days were tobacco companies. And there is no such thing as a big law firm that doesn’t have a few sordid corporate clients. (The same way Chiu’s much-smaller firm had some Republican clients.)

Campos never once represented a tobacco company. At Arnold & Porter, he represented the government of Brazil when it sought to collect money that a corrupt former government official had embezzles. He represented Columbian fishermen. That sort of stuff. “I refused to work for the tobacco industry,” he told me.

So why go to work for a corporate law firm anyway? Good question. Here’s a good answer. Campos, the son of Guatemalan immigrants, graduated from law school almost $100,000 in debt. As the only member of his family with an advanced degree (his dad was a carpenter) he was paying for the education of his sisters. Sucks to have to make a living when you have family to support. So he made some money for a year or two before moving to public service. Shocking.

I also asked Chiu, who is also the son of immigrant parents but attended private schools in Boston, how much debt he had when he graduated and how he managed to pay it off. He hasn’t answered.

But here’s the real killer.

That’s a brilliant political consultant move: Daly and Mirkarimi both have high negatives in the city right now. But for real? Mirkarimi has NOT endorsed Campos. He has NOT been to any Campos events. He is NOT a “supporter,” prominent or otherwise. That’s just wrong. Daly is supporting Campos, in part because he works for a union that’s endorsed Campos.

In an earlier flyer, Chiu attacks the Board of Supes when Peskin was president, saying he needed to come in an “heal” a “dysfunctional” board. First: Chiu ran with, and courted, Peskin’s support. He probably wouldn’t have been elected without that. Second: The Board under Peskin was one of the most effective in modern history. Yes, Chris Daly said Fuck a lot. But really — with Gavin Newsom, a dysfunctional mayor if there ever was one, the political center of the city was the very Board that Chiu is dismissing. And the same people he trashes were the ones who got him elected.

Besides, here’s the facts: The single most prominent supporter of David Campos is Assemblymember Tom Ammiano, who the polls show is one of the most trusted politicians in the city. So, of course, he’s not on the list.

Okay, do politics. Attacks are attacks. But facts are also facts, and even the attack dogs ought to get them right.