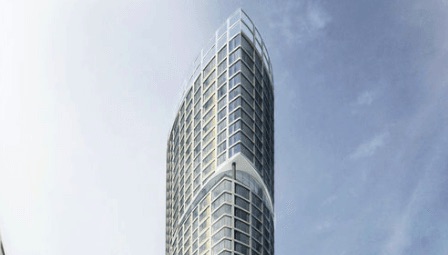 The Board of Supes put off for a week a decision on the environmental review of the One Oak project after a series of speakers noted that the city gave the developer additional parking without seriously reviewing the traffic and transportation impacts.

Sup. London Breed said she had been meeting with the appellant, Jason Henderson, the developer, and the Planning Department to see if there’s a negotiated solution.

If that happens, Henderson told the board, it should include a requirement that developers build no more than one asking space for every four housing units in the entire “Hub” area around the congested Market and Van Ness.

Henderson also said the supervisors should direct the city planners to develop workable metrics to discuss the impacts on the transportation network of Uber and Lyft vehicles and the impact of e-commerce deliveries.

Those are the key elements of Henderson’s appeal.

Todd David, director of the Housing Action Coalition, tried to turn this into a question of whether housing is more important that a fight over the number of parking spaces. “This has nothing to do with the environmental impact report,” he said. “This about 60 parking spaces versus 950 people getting a place to live. There is no connection between parking spaces and EIRs.”

David and his group support pretty much all new housing, but his statement is stunning: Parking — and the impact of more cars on the city’s transit system — is and always has been a relevant issue for environmental review.

As Marc Solomon, a Soma resident, pointed out, surface transit — that is, Muni buses and trains — serving all parts of the city pass through the Market-Van Ness corridor. The more cars and congestion in that area, the slower Muni gets, and the more people decide to use private cars, making the congestion citywide even worse still.

It’s kind of crazy to be watching two of the worst hurricanes in this century, following one after another, hitting the Gulf Coast, the Caribbean and Florida, and and arguing that increased use of private cars  — among the greatest sources of greenhouse gases and climate change — isn’t an environmental impact.

And David is flat-out wrong that this is just about how many parking spaces the developer gets. The rule for that part of town is one space for every four units; the developer asked for twice that much, and the Planning Commission granted a conditional use to allow it.

But Breed pointed out that the CU has not been appealed — and Hendserson’s lawyer, Sue Hestor, noted that they are going to try to find a solution here.

What’s at stake, Hestor said, is how the city does environmental reviews of Uber and Lyft vehicles, transportation, and affordable housing.

The city planners have said that they don’t have any clear data on Uber and Lyft, so they simply ignore the impact those 45,000 or so cars have on traffic in the city.

And there are several other large housing developments slated for the Hub area, all of which might apply for conditional use parking additions, all of which will attract Uber and Lift and delivery vehicles, and the point of environmental review is to get a handle on those issues in advance.

That way, when the developer building housing on the old Honda dealership across the street asks for double the normal amount of parking, the planners can say: Sorry, but it’s clear that your building will already create substantial congestion, and slow down Muni service all over the city. So no more parking.

And you know what? The developers will build anyway. Maybe the One Oak project, with less parking, will have to become rentals, not luxury condos. That is not the city’s problem.

This is an unusual appeal, in that the developer can come to the table with an offer — most likely, more affordable housing. But City Planning also has to be there, and has to agree to a different type and level of environmental review.

Build Inc. can’t eliminate CUs for additional parking in the Hub. Build Inc can’t start counting Uber and Left vehicles (and sue the companies for the necessary data).

That’s the City Planning Department. We shall see how this proceeds.