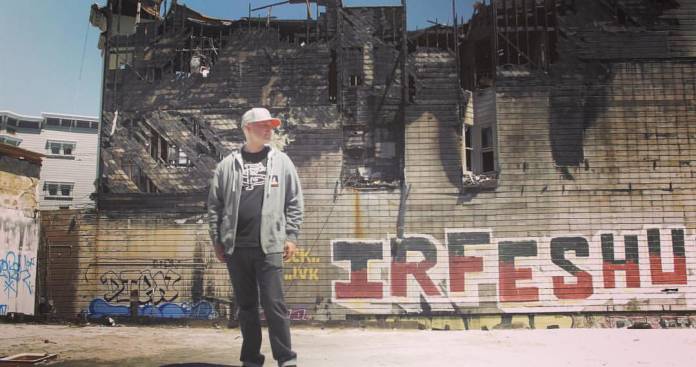 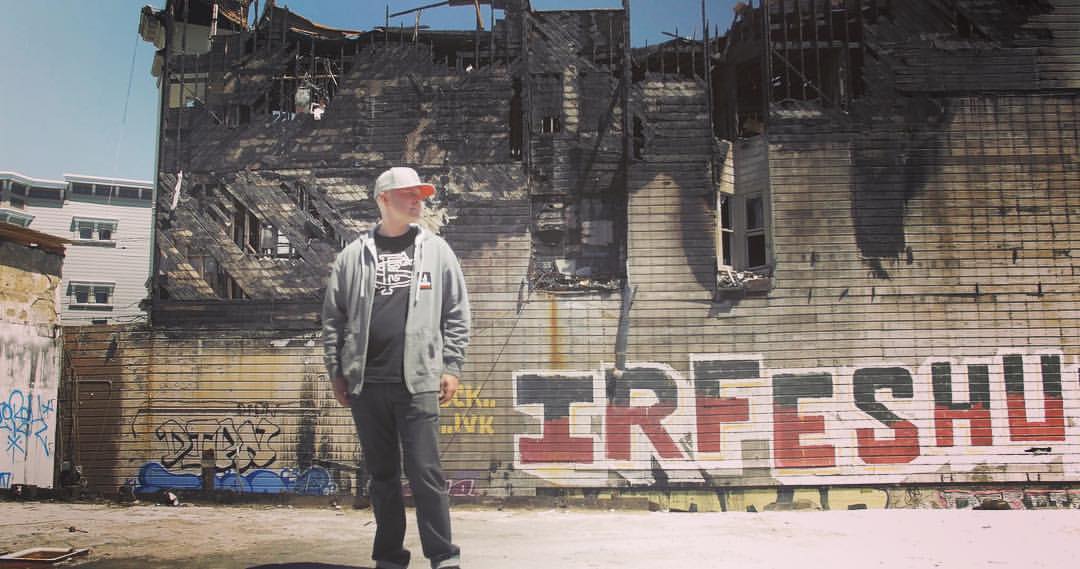 ALL EARS “With the passing of Ed Lee, I think we’re at a crossroads in terms of the future of housing in this city, which will be largely determined by his successor,” local rapper and longtime music scene presence SCS tells me over email.

“Will our next mayor continue to give our city away to big businesses and short-term rental services? Or will they act on behalf of their constituents, advocating for stronger tenants’ rights? As we’ve seen with Lee, the mayor can have a profound impact on our city’s housing situation, and it is my sincere hope that our next one stands up for the people and curbs the displacement of so many working and middle-class San Franciscans.”

That kind of forward-thinking critique comes through in the long-awaited (and gorgeously shot) video for “Housing Crisis,” released on his label Richland Records. In the video, shot in various locales around the city, he calls out tech billionaire Ron Conway and political corruption, and asks “What happens when the bubble bursts?”

As artists with a political edge are forced out of the city, it’s refreshing to get such a direct take on the current state of things. I talked to SCS about hip-hop’s ability to engage with our moment, the struggle to survive in SF as an artist, and the need to speak out about the inequality that’s torn the city apart.

48H You’re taking on some big, timely issues with “Housing Crisis”—and several tracks on the album directly confront political crises. Why do you feel it’s important to do this through hip-hop, and how are you hoping to inspire other kinds of activists?

SCS I’m someone far to the left on the American political spectrum, and I feel like it’s often an uphill battle to deliver my hard-hitting messages or critiques through conventional channels like scholarly articles or op-ed pieces. Rather, hip-hop provides a liberating medium for me to express my views through rhythm and poetry. Depending on how you inflect certain lines or where you place certain words and syllables, you can freely manipulate meaning.

Hip-hop is a global phenomenon, empowering its artists to deliver their messages around the world. With the way that music and videos are so accessible these days via the Internet, it’s relatively easy for me to get my content out to the masses and reach people who traditionally would be less inclined to read a relatively dry article in some academic journal. I certainly don’t set out to inspire other kinds of activists, but if I do, that’s fantastic. I honestly don’t even really consider myself much of an activist; I’d call myself a concerned citizen who loves using hip-hop as a platform to get my messages out there. 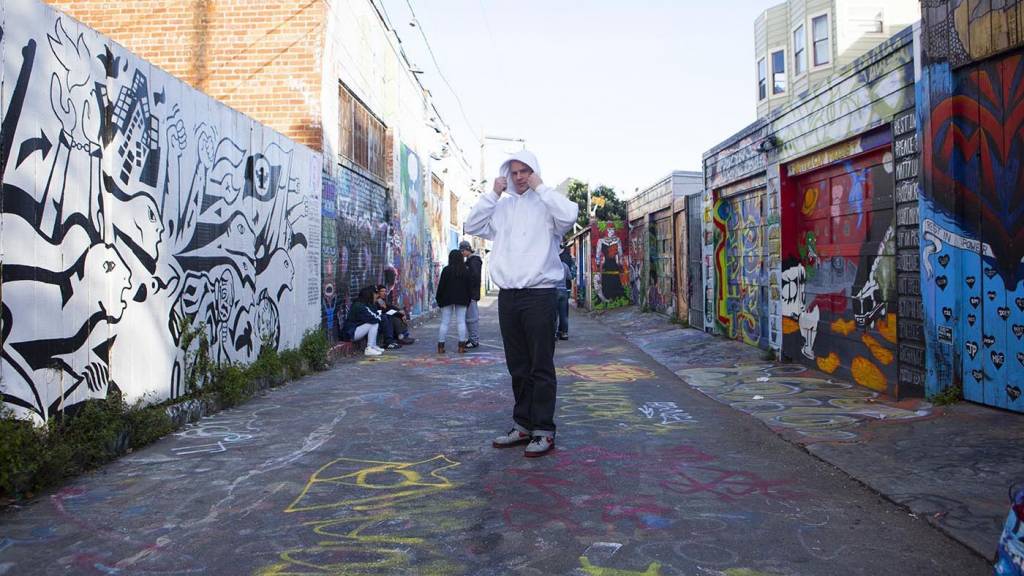 48H It’s become harder and harder to stay in SF as an artist, musician, writer… Hip-hop has felt especially stung. (It feels like we’re missing an entire generation of Fillmore rappers.) What’s it like for you and the people you work with to survive as hip-hop artists these days? What are you seeing that’s giving you hope for the hip-hop scene?

SCS Most of the hip-hop artists I know are funding themselves or working with boutique labels. As audio streaming has completely changed the landscape of the music business, it’s much more difficult for artists to sell thousands of copies of their CDs out of the back of their cars. It generally benefits artists to learn as much as they can about the music business and various income channels that may be open to them whether it’s digital album sales, YouTube monetization, synch licensing or something else entirely.

Certainly there are ways for hip-hop artists to make money out there, but by and large, artists typically have to invest in themselves (or have someone invest in them) prior to “making it” in the biz these days. I’m fortunate because my bartending work typically enables me to pay the bills and still have some left over to invest in my music and videos, and I’m confident that if I and my label continue to improve by increasingly stepping up our content, we’ll eventually find the success that we’ve been seeking.

48 Hills I know you as a fixture of the Lower Haight scene. Tell me a bit about your background as a hip-hop artist and history

SCS I fell in love with hip-hop when I was in grade school in the ’80s in New York hearing songs like “Rappers Delight” by Sugar Hill Gang, “Jam on it” by Newcleus, and “Planet Rock” by Afrika Bambaataa. When Tribe Called Quest’s “Check the Rhime” came out in ’91, I fell completely head-over-heels with the genre, and by the time high school was wrapping up in the mid-90s, I was freestyling with friends at a neighboring school. Later when I was in college in the outskirts of Philadelphia, my friends and I would freestyle for hours in dorm stairwells, and I later broke out my pen and pad to start writing down rhymes and developing a bit of a persona.

However, it wasn’t until after graduating college and moving out to San Francisco in ’99 that I really pursued my goal at the time to start a little recording studio. I started recording myself and other local artists in my Lower Haight studio while working at Bean There café and later bartending up the street at The Top. When I moved out of the Lower Haight to Bernal Heights in 2005, I started to record more people and decided I wanted to start releasing their music. As such, I founded my label Richland Records the next year, the name inspired by the street that I was living on at the time in Bernal: Richland Ave.

In the years that followed, I put out music from some different hip-hop artists and was even working with a talented artist outside of Philly at one point, but I kept asking myself, “Our label’s music is good, but the way the world seems to be going to hell in a hand basket right now, can’t we be using our music in a more positive way to try and create change in the world around us for the better?” It was actually a dream I had in Vancouver a night or two before New Year’s 2016 that really encouraged me to start putting out my own music in earnest. I took an audio recording class at City College that Spring Semester and was able to impress upon my wonderful instructor that I intended to make a hip-hop album for a good cause, and she essentially believed in me and my goal and gave me the keys to the recording studio for the semester.

I basically locked myself in there for half a semester to record and by the time summer came around, my debut album First Day of School was finished. Unlike many mainstream hip-hop artists who drone on incessantly about drugs, cars, women and money, I addressed what I felt to be more substantive issues: racism, child labor, corporate welfare, central banking, animal rights, and prison-for-profit schemes. I really consider my music to basically fall into two camps: “sticking it to the man” and “watering the seeds” (you know trying to provide the youth with some positive messages instead of the negative ones they’re constantly being bombarded with.)

The album I released last year called Leaps & Bounds has more social justice-related songs (calling out 45, Paul Ryan, Big Oil, Mainstream Media and the Federal Reserve) as well as some positive tracks for the youth. I’ve already started writing my third album, that I’m planning on dropping next year.