“I’m calling to see what the supervisor is going to do about the tent encampments outside my building.”

I am working in the office of an SF district supervisor. The caller tells me that he is upset by the lack of responsiveness from the local police. Why does it take so long to remove the tents?

“I had a brother with addiction. These people just need some tough love and discipline.” He tells me his brother overcame addiction. Why can’t they? “The city doesn’t care about us because we’re rich. We’re going to remember this during the election.” 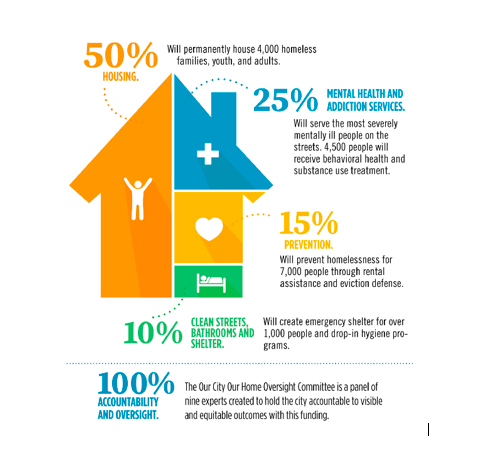 In San Francisco we have immense wealth and innovation. As cited by Marc Benioff in a recent op-ed, the Bay Area has the third-highest number of billionaires on the planet. As cited in the United Nations report on extreme poverty and human rights, that immense wealth also stands in shocking contrast to the conditions in which a vast number of us live on the street. As income inequality continues to spiral out of control, wages continue to stagnate, and federal resources continue to lack, more and more of us at the bottom end of the resource continuum continue to fall into poverty, and then into experiencing homelessness. Our resources are finite, and when one group experiences wealth so immense that the outlets to spend it are lacking, another will never know what it is to experience having your basic needs met.

These levels of income inequality intersect with other areas and identities like racial or ethnic groups, class, ability, or even LGBTQ identities, and serve as amplifiers for experiences of homelessness. This is continuously reflected in San Francisco’s Department of Housing and Urban Development (HUD) mandated point-in-time Homeless Count.

This upcoming election, we have some of the most significant ballot entries for housing and homelessness that we’ve had in decades.

Our Home Our City, Proposition C.

I won’t go into all the specific details, but you can find the fairly detailed plan and explanation here. Rather, I’m going to respond to some common misconceptions about Prop. C that I see floating around, and to a few of Mayor London Breed’s points.

Proposition C is an average 0.5% tax on business gross receipts of more than $50 million. There are varying tax rates for different industries that were developed with input from the San Francisco Chamber of Commerce. This was done to account for industry profit margins.

Why a gross receipts tax? In 2012, San Francisco was trying to spur investment in its Mid-Market area. To attract tech companies and prevent them from leaving, the city changed its tax policy from a payroll tax to a receipts tax. This was largely in part due to lobbying from tech companies.

Before that change took effect, the city exempted new employees from any payroll tax in parts of mid-Market. That meant companies planning to go public, like Twitter and Zendesk, wouldn’t be paying taxes on their employees’ exorbitant stock options. Thus, the tax became known as the Twitter tax break and the company went public shortly after.

Why does this matter? Many of those same companies are now arguing that this same tax mechanism they lobbied for will impact them unfairly. But the companies that would pay a slightly higher tax to SF have also had a corporate tax cut of 14% thanks to Trump. I will also point out that when we are arguing over nuances in the tax mechanism’s fairness, we are also saying that elevating people out of homelessness is less important.

London Breed Issue 1: Proposition C lacks accountability.
Mayor Breed’s first argument is one of accountability. As someone who helps communities figure out how to measure success and comply with often daunting reporting requirements in decreasing homelessness, I find this argument unconvincing.

First, Our Home Our City has a fairly detailed publicly facing plan on its website, and the actual legislation with more of the specifics is also available. This plan is based on decades of research and best practices, developed by experts in the field. I can show you report after report and study after study showing effectiveness of programs like permanent supportive housing (PSH), rapid re-housing, (RRH), or rental subsidies, but a lack of resources is without a doubt the key issue.

People need housing, it’s not a secret. Authors of the legislation also sought London’s input to the plan. I was in a supervisors’ office when the Home Our City people stopped by every office seeking input, multiple times. It’s not a question of if advocates reached out to her.

Second, written into the legislation is also a required Oversight Committee that will recommend funding priorities and produce impact reports. This is in addition to existing accountability and reporting on the Homeless and Supportive Housing (HSH) website, through the Controller’s office, the city budget, the strategic plan to reduce homelessness that must be continuously updated, the applications for federal funding, applications for state funding, the city Budget and Legislative Analyst, and many more. This was a list off the top of my head. We can spend additional money on administrative costs and preparing reports (which financially benefits me, BTW), but how much do we want that to consume the process?

The idea that there is no accountability in how well these services are doing or if the money is being spent well is unfounded. Breed didn’t make the same accountability arguments when when she was pushing Prop D (commercial rent tax) and Prop K (general sales tax).

This funding saves lives. In the past year and a half, we’ve seen 1,950 people exit homelessness, and have housed 7,000 formerly homeless people with permanent supportive housing. I would call that an immense success. To say that there are “no discernible improvements in conditions” is to fail to contextualize the issue of homelessness as a symptom of increasing income equality and affordability. As more and more resources continue to conglomerate for the rich, more and more people will fall into poverty, and then into experiencing homelessness.

In Support of the Safety Net
In the United States we have a minimum wage, but there is no maximum wage. We apply intense scrutiny to programs and funding designed for the poor or homeless, but where is that same intense scrutiny when we subsidize the rich? Where are the reports demonstrating the switch from a payroll tax to a gross receipts tax benefited San Franciscans?

Where are the metrics showing wage increases and job growth for Tenderloin residents? Are those metrics thoroughly backed by research and then reviewed by an oversight committee? Where are the reports showing that Twitter is fulfilling the community benefit agreements it set when moving into the location? What accountability measures are in place to make sure it does?

We subsidize the rich off the backs of the poor, but are so unwilling to move in the other direction, despite the level of income inequality in our city rivaling developing nations. This is because power and resources define who gets to frame the issue as it enters the public sphere. Those who have resources and time to advocate for themselves will. Those who are lacking will have limited opportunities. We must always keep that in mind when examining any issue.

London Breed Issue 2: Proposition C could make our homeless problem worse
I strongly agree with Mayor Breed that we need larger responses to homelessness and need to approach it from a regional perspective. We need to tie in housing, mental health and substance abuse services, and we need to take into account the racial context in which they operate. I also support CA Propositions 1 and 2, and think they are necessary for providing much needed supportive housing. In fact, I’m already helping communities plan for this funding.

But, we should also have a local response, and there’s no research to show that our local response will attract people from other places outside San Francisco.

People experiencing homelessness within San Francisco are overwhelmingly from San Francisco. Even if it did, our Coordinated Entry System would prioritize accordingly. Let’s consider that though. If people did come here for services, would that be so bad? Is offering refuge and shelter not something that should be a San Francisco value? This funding is literally life saving, and that also has a compounded generational impact for developing children and for future generations.

From the Coalition on Homelessness

London Breed Issue 3: Proposition C will likely make it harder to fund homelessness services
I sincerely appreciate this concern from the mayor, but I find it unlikely. For context, California’s Prop 13 (People’s Initiative to Limit Property Taxation) requires taxes designated for a specific purpose pass by a 2/3rds vote, but that has recently been clarified by the State Supreme Court.

Here’s the part that matters:

“The California Supreme Court recently clarified that certain restrictions bind local officials but do not bind the voters themselves. San Francisco is confident that when voters act through the initiative process, a simple majority vote is required, rather than the two-thirds majority required when local officials act,” said John Cote, a spokesperson for the City Attorney. “We proactively brought this case [Not prop c] to get the certainty that a court order will provide on this issue in order to uphold the will of the voters.”

Logo for the Coalition on Homelessness

A Reformation of Values

As our city changes and increasingly becomes a city for the wealthy, there is a tension between a force demanding unrelenting economic growth and an inequality of attainment. It’s time to change the terms of the conversation; to re-frame the debate as a moral imperative rather than an economic analysis. We have a chance to redefine what our values are as a city through Proposition C, and we need to take it. Rather than approaching homelessness as a single policy issue to be solved, we must look at it as a symptom of a social safety net that is failing the most marginalized in our communities. We need a social analysis and moral outrage to combine with our newfound passion for ending homelessness. We’ve gotten pretty good at learning how to reduce homelessness in the past few decades with very limited resources, and all of that research and planning has gone into Proposition C. Fundamentally, this is about what we will choose to value. Will it be corporations with more than million on annual revenue, or will it be those slipping through the cracks?