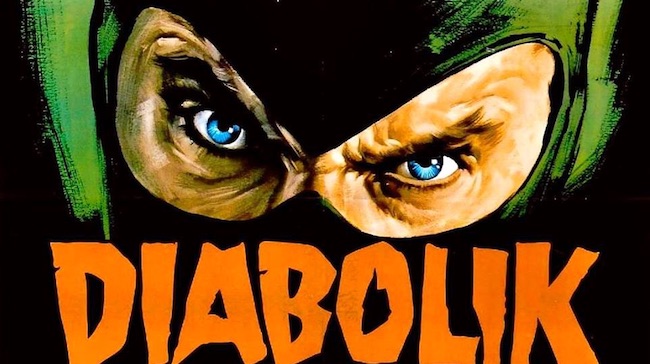 Frolicking holiday otters! December 16, 18, 21, and 23, the Aquarium of the Bay will be adding nearly 1000 pounds of snow to its river otter habitat, and its three resident otters — Shasta, Baxter, and Ryer — will have a ball digging, playing and generally rolling around in the fluffy, pillowy frostiness of it all.

Also! “Treat-stuffed stockings, festive trees, and gift-wrapped toys”! Gah, so delightful. Why no tiny otter menorah, though? Even though Hanukkah is over, nothing says “diverse holiday vibes” more than an otter in a yarmulke.

There is no greater gift to mankind than the deafening “squee!”s that come from witnessing river otters tumble playfully in snow. You really otter get your tickets now.

>> DANGER: DIABOLIK Camp it up in super-spy/master sports car racer/generous lover style, as this classic 1968 Italo-French caper hits the big screen at the Balboa. Director Mario Brava will have you leering at and cheering for the special effects — including some architecturally-challenging bikinis. Yeah, baby. Plus a trivia contest right at 7:30 for warm up! DOUBLE FEATURE BONUS: special secret screening afterwards of an infamous Turkish sci-fi flick! (Hint: It probably rhymes with Blar Blars.) Wed/16, 7:30pm, $8-$11. Balboa Theatre, SF. More info here and tickets here.

>> GOODBYE PARTY FOR SARA SHORTT We’re going to miss this quintessential SF activist — let’s send her off right (plus this is sure to be a schmoozing politico dream party). “After 11 years, Housing Rights Committee Executive Director, Sara Shortt, will be leaving. Come celebrate the 17 years she has contributed to the tenant’s movement in SF and send her off to her new adventures in LA. Snacks, drinks, entertainment and fun!” Thu/17, 6pm-9pm, free. The Lab, SF. More info here.

>> “SPLINTERS IN OUR ANKLES” Humans: who are they, what do they do and how do their actions affect the world in which they live? These are the kinds of huge questions the GERALDCASELDANCE company attempts to answer — in disarmingly specific ways. “Splinters In Our Ankles,” a multimedia dance event, is “a contemporary movement essay that responds to the colonial origins and collective cultural amnesia imbued in the Philippine folk dance, Tinikling.” It sounds fascinating, important, and beautiful.  Fri/18-Sun/20, various times, $20-$35. ODC Theatre, SF. Tickets and more info here.

>> KATABATIK: WINTER SOLSTICE Now here’s a celebration us raving pagans can get behind. The Katabatik collective have been throwing dark, deep, psychedelic-industrial-acid techno all-nighters in the woods for several years. They are a local treasure. This year’s lineup features a “hidden oakland location: immersive full-range sound system: transfigured environment: esoteric electronic music in the Katabatik tradition. With DJs and live players including Not Breathing, Leila Abdul-Rauf, Identity Thief, and many more. Fri/18, 9pm-very late, $20-$25. Tickets and more info here.

>> “A CHARLIE BROWN CHRISTMAS: LIVE” Gen-Xers (and everyone else, really), start your silly Peanuts dance engines! This live action version of the TV classic — good lord we hope the makeup isn’t as terrifying as this — boasts singer Jodi Benson (the voice of Ariel from Disney’s Little Mermaid, plus the SF Symphony playing those unforgettably atmospheric Vince Guaraldi tunes. There will be classics, carols, and singalong before the performance. Fri/18-December 24, various times and prices. Davies Symphony Hall, SF. Tickets and more info here.

>> KITKA: “WINTERSONGS” One of Bay Area music’s greatest treasures, this women’s vocal ensemble united since 1979 in their love of Eastern European music. Complex, chromatic, harmonies will illuminate Old First Church, as Kitka digs into its repertoire of seasonal songs, expanded from its groundbreaking Wintersongs CD, released over a decade ago to critical acclaim. I can’t wait for this. Sat./19, 8pm, $15-$20. Old First Church, SF. Tickets and more info here.

>> UNSILENT NIGHT Imagine that scene in “Say Anything” where John Cusack hoists a boombox above his head. Now imagine dozens of people doing this (or the iPhone equivalent at least), and blaring many whackadoodle holiday favorites, to form a “moving sound sculpture,” which sounds a new side of caroling. Brought to us by the ever-awesome San Francisco Contemporary Music Players. Bring your own boombox or cassette player, or download the app. Sat/19, 4:45pm, free. Gather across from SF City Hall in Sue Bierman Park. More info here.

>> MARIACHI EL BRONX Punk-rock mariachi? Hot. And somehow perfect for Christmas, not sure why. Anarchy in the Navidad? OK, OK, Mariachi El Bronx isn’t quite that punk rock, more emo — Emoriachi, if you will. The LA septet will haul into the Independent, full horn and string section, greca-embroidered suits and great, expansive tunes in tow. Mariachi El Bronx is the alter ego of provocative hardcore band The Bronx, who you can catch at the Independent on Monday. Double dose! Sun/20, 7:30pm, $25. The Independent, SF. Tickets and more info here.

Celebrate two decades of cheap local love, as the impresario of inexpensiveness throws one heck of a shindig
Read more

After the pandemic's reckoning and personnel changes, the Bay faves have matured in tone.
Fashion

Celebrate two decades of cheap local love, as the impresario of inexpensiveness throws one heck of a shindig