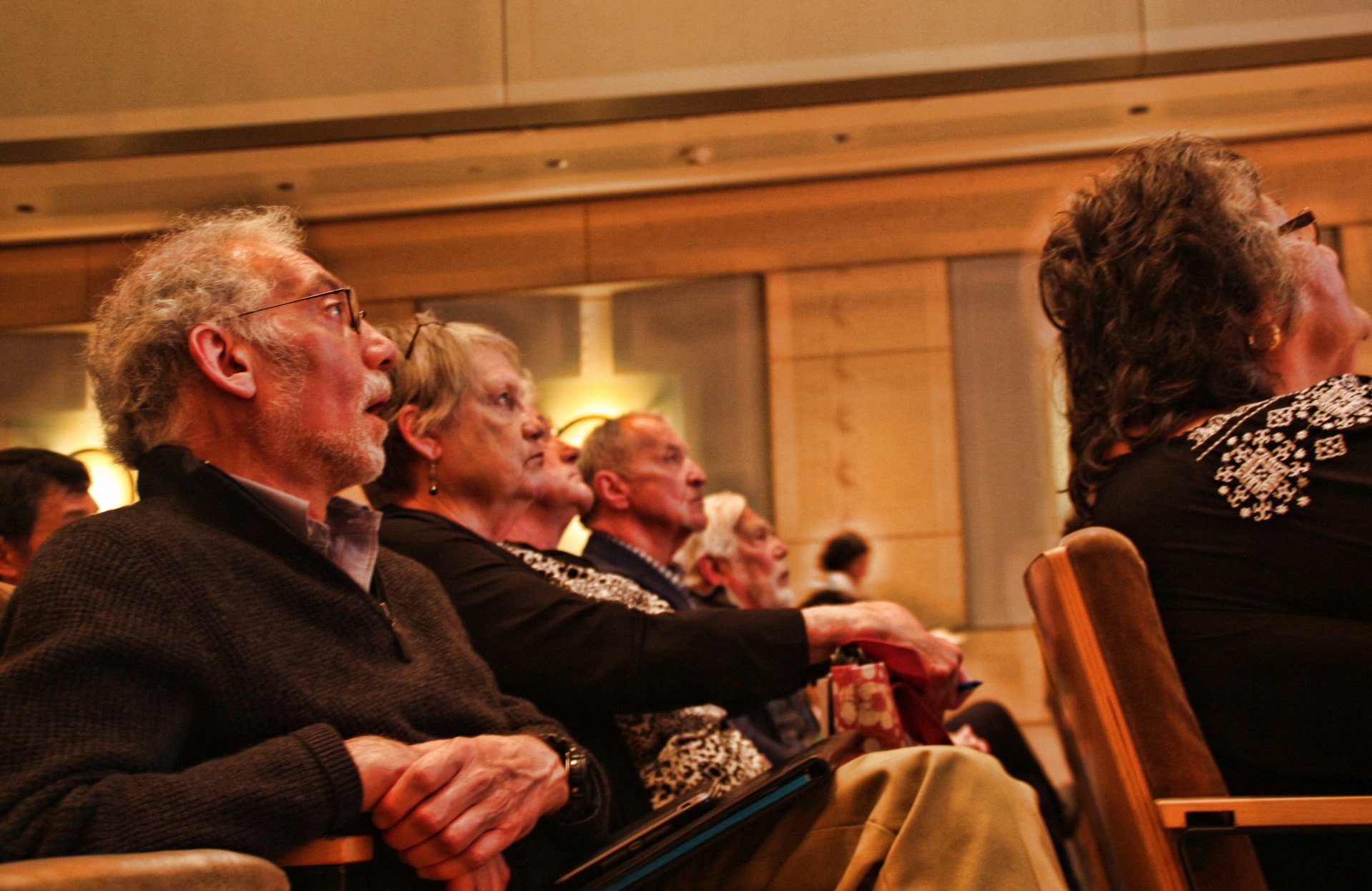 The annual San Francisco Public Defender’s Justice Summit Wednesday focused on the police department’s use of force policy — and the potential introduction of Tasers to the San Francisco Police Department.

The discussion got heated as a senior official at Taser International, Steven Tuttle, tried to argue that the stun guns are a better alternative to existing options for SF cops.

He suggested that the only alternatives in many law enforcement situations are beating a potential suspect into submission with a baton, pepper spraying that person, choking them, siccing a dog on them — or using a Taser.

The idea that Tasers are just another type of excessive force, which often isn’t necessary, and that the best approach might be avoiding force in the first place, never seemed to cross his mind.

Former Chief Greg Suhr, in arguing for Tasers, has said that they would give officers an alternative to shooting people.

But Akiva Freidlin, a Stanford law student and co-author of Electronic Control Weapons: Reading the Evidence, said at the summit that there is little evidence that equipping cops with Tasers reduce the use of lethal force.

“There is not a reduction in deaths,” he said.

The summit brought people from around the country to examine SFPD’s use of force policy and to look at possible reforms.

The past few months have seen a number of protests that led to the resignation of San Francisco Police Department Chief Suhr. This year’s summit comes just a week after an SFPD officer fatally shot 29-year-old Jessica Wiliams in the Bayview.

Williams talked about the various police officers that were involved in the shooting of Woods: “At one point it seems one of the officers goes back to his car to refill what I can assume was a non-lethal force” Williams said while going over still frames from the Woods shooting video.

“Let me tell you a little bit history of those 4,500 or so lynchings,” Williams responded “They were actually publicized in the local papers hours before the events; that’s the reason why all the people showed up, the photographers worked for the newspapers and that’s the reason why they are all great photos showing faces. Everyone that showed up understood what was going to take place and they showed up and they wanted to have their photos taken because all those photos ended up in the US mail as postcards.” The crowd hissed in disapproval “That’s how crazy it got and that’s how crazy it is.”

The debate heated up after the lunch break when Tuttle, co-founder of Taser International, took the stage alongside Petra DeJesus, a member of the SF Police Commission, and Freidman, who has done one of the most exhaustive studies of the data around Taser use.

DeJesus spoke about the work being done to change the department’s use of force policy — and she was highly critical of the recent shootings.

“So in the middle of working with the collaborative group on changing the use if force policy we had two more disturbing shootings and they clearly show no de-escalation, they clearly show no time and distance and there’s even a question on whether they are even using critical thinking and common sense in terms of these shootings,” she said. DeJesus spoke about the need for more extensive training and revealed that the Bayview and the Mission are where rookies go to train — and suggested that needs to change.

Demarris Evans, a public defender and co-chair of the department’s Racial Justice Committee, then asked Tuttle: “Do you think tasers would make us safer?” Before Tuttle could answer, veteran activist Magick Altman shouted back “He’s a salesman for Taser International with all due respect he should not be here today.” Some audience members applauded in support.

Tuttle then started to explain the toolbox available to the police officers but was interrupted again by Felicia Jones, from the Justice for Mario Woods Coalition. “Our people will be executed,” she said as someone from the audience protested “Let him speak so we can listen.”

Tuttle continued: “The toolbox that you saw, that toolbox contains a baton and that baton is used to beat somebody into submission, prior to that it was pepper spray, chokeholds, and K9s.” Tuttle spoke about the tools police used during the riots in the 1960s and argued that tasers would be a lot safer option than the alternatives available.

Jackie Barshak, with CODEPINK San Francisco, vehemently disagreed. “Tasers kill, 93 people died in California from Tasers last year,” she said. “What does it take for you to realize that you are in contract with the city of San Francisco and getting millions of dollars from that contract that’s why you are in that seat right now.”

Author and tenacious activist Adrianna Camarena brought up the Alex Nieto case “Before you start again I would like to say that Taser International manipulated the evidence in the Alex Nieto case and afterwards got a $2.4 million dollar contract [from the city] for body cameras.”

The reactions from the audience stem from several heated discussions, almost every week, at the Police Commission meetings where community members often argue the case for and against tasers.

Freidlin went over the evidence that exists about Tasers today. “There’s a lot of bad studies on this question” he explained “There’re good studies on both sides, now how is that possible? it turns out that the best studies that show that risk to injuries on citizens goes down do not count the Taser barb puncture as an injury in their data and they don’t count the experience of having a device applied. So if you just wave your hand and ignore that kind of injury and say it’s not an injury accounts for the distinction (between the two opposing studies).”

Freidlin reiterated that there’s not enough evidence from studies across the country that could demonstrate that the use of tasers is bringing down officer involved shootings.

DeJesus agreed with Freidlin. “I think it is seen as that the Tasers are being given as a reward for the shootings and I think that is the perception that is out there, I think Taser is not the answer right now,” she said.

It’s one of the essential questions.

There’s also the issue of safety. Tuttle said that Tasers have been tested and don’t cause long-term damage, but most of those tests, Freidlin said, were on young, healthy police officers who volunteered to be zapped. Those tests included a two-minute jolt, and the officers had others around to catch them as they fell to the ground.

In the field, he said, many officers deploy the stun guns for five-second bursts, and re-fire them several times without even realizing it. And the people they encounter are more likely to have health or substance-abuse issues, which make the risks of death much greater.

It turns out that there’s also a “cattle prod” setting on the Tasers, which doesn’t incapacitate a subject but does inflict immense pain. That setting, Tuttle said, wasn’t recommended for police use. But it exists.

Oh, and there’s now some evidence that the zapping causes at least short-term cognitive problems — Freidlin said that someone who has been hit with a Taser should not be asked to make a statement or read their Miranda rights for at least an hour afterward. Would the SFPD really follow that rule?

There was an almost surreal quality to some of the Taser discussion, particularly in the context of what the SFPD has asked for in this city.

The police leadership has consistently said that Tasers would prevent shootings, that people like Mario Woods and Luis Gongora who were not subdued by beanbag rounds could have been Tased instead of shot and killed.

That would mean Tasers were an alternative to lethal force. But the Taser man, Tuttle, insisted that the stun guns were never meant for that purpose: If the cops see a need for lethal force, he said, they should and will pull out their guns.

Which means either the SF cops are simply resorting to shooting people in situations where lethal force is not appropriate (as much evidence suggests they are) — in which case Tasers make no difference — or they want Tasers to zap people who are not much of a threat at all.

The argument from the SFPD, based on what we heard today, makes no logical sense.

We asked Friedlin after the session who actually winds up getting Tased. In the past, he said, some department used them on “passive” suspects who were no threat to an officer but were simply not complying with orders. “That’s not considered good practice these days,” he said.

But you know it will happen.

In closing, Adachi brought home the issue: “We have to treat these killings as a real crisis here in San Francisco, these are issues that need to be dealt with immediately.”

48hills will be cosponsoring a showing of the movie “Killing them Safely,” a documentary about Tasers, Tuesday/31 at the Roxie. Information is here. It will be followed by a discussion with the filmmaker, Nick Bernadini, and Public Defender Jeff Adachi. Other sponsors include the ACLU of Northern California, San Francisco Public Defender’s Racial Justice Committee, Coalition on Homelessness, Asian Americans Advancing Justice-Asian Law Caucus, National Lawyers Guild SF Bay Area Chapter. Tickets are available now, and the event will probably sell out so buy early!