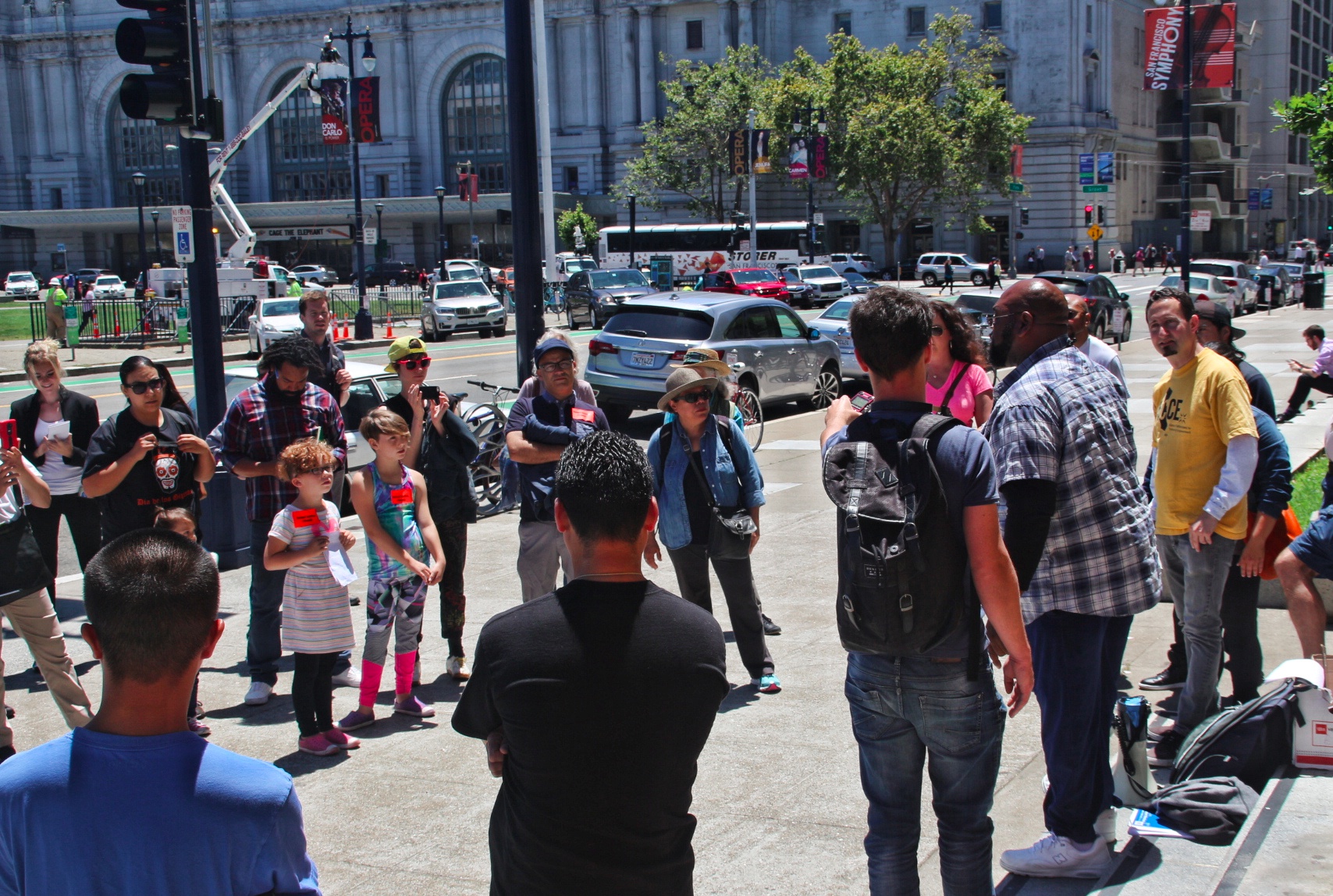 Coalitions of community, racial and economic justice, and housing groups including Jobs with Justice, the Alliance of Californians for Community Empowerment, Mission Economic Development Agency, and Mission SRO Collaborative held a protest outside City Hall today to call for adequate funding to address the affordable housing crisis in San Francisco.

“When Twitter and other major technology corporations demanded tax breaks to stay in our city, the city had no problem giving them a hand-out,” said Julien Ball of Alliance of Californians for Community Empowerment. “But when we want real funding to solve the housing crisis the tech boom helped cause, our calls for change and real investment in stopping the displacement crisis keeps falling on deaf ears. It’s time we had a real voice for them to pay their fair share.”

The small group gathered at the steps of City Hall to call for resources to address the housing crisis. The rally comes as the Board of Supervisors debate the city budget, which community leaders contend will not adequately address the crisis, despite repeated calls for resources to keep people in their homes and build new affordable housing.

San Francisco resident Carlos Gutierrez addressed a dozen supporters. “It means a lot that people come out here to support this fight because a lot of us are still here fighting the good fight. My family has been living in the same house for the last 36 years, my aunt who lives downstairs who is 62 years old, who is legally blind, they (the new owners) put our house on the market,” Gutierrez has three aunts who live in their family home and have health complications. The building was sold 8 months ago after being on the market for 10 months. Gutierrez’s family was under a lot of stress while it was on the market, “We believe the stress from speculators coming in and out may have caused the most recent stroke. The health of my disabled family members has deteriorated and would have no where else to go if evicted,” Gutierrez said.

Gutierrez is trying to keep his family home and was heartened to see others pushing back and sharing their stories of successfully fighting eviction.

Artist Rene Yanez, who fought hard against his eviction in 2013 through everything from eviction garage sales to various art exhibitions, was at high spirits at the protest. “This is important because we gotta keep teachers, artists and nurses in San Francisco because that’s what makes it San Francisco. It’s part of our being, you know being in the mission was part of my DNA,” he said.

Yanez also spoke about the recent fire at 29th and Mission and expressed his doubts on the series of fires in the Mission. “These places burn down and poof a condo goes up,” Yanez said as people from the crowd responded in support.

Lita Blanc, President of United educators or San Francisco, said that public education is at risk in San Francisco because of the increasing rents and evictions. “The affordability crisis is accentuating the crisis in which educators find that they can’t afford to stay in the city in which they are teaching. So last year there were 500 teachers that had to be replaced in the beginning of the school year and this year once again there’s this big turn over where there are another 500 openings posted for the classrooms of this city.”

Blanc’s concerns have reached the Board of Supervisors as Sup. David Campos authored legislation in March prohibiting no-fault evictions during the school year against employees at San Francisco schools and child care centers, as well as against families with children. Campos’ legislation expands existing protections to cover nearly any school employee.

Prolific foreclosure and eviction fighter Ross Rhodes rallied the crowd to march in to City Hall and share their concerns at the public comments. “Let’s get in and march up there and tell the Budget Committee what we want done because we are the consumers, we are the ones that make the city run, we are the ones that vote them in the office. If you want change, we gotta make change.”

In a press statement about the protest, advocates shared their concern over inaction in the face of rising evictions and homelessness “Instead of allowing communities a greater voice to address the crisis, win protections and adequate funding, recently some San Francisco city officials and Governor Jerry Brown have been influenced by real estate and major technology corporations to allow developers greater ability to build more market-rate units with even less public input through the local ‘Affordable Housing Bonus Program‘ and the state’s “by-right” proposal.  If passed, both would further quiet the voices of those mose impacted by the crisis – the city and state’s poor to working class communities of color.”

Community groups and her district residents will be calling on Land Use Committee Chair Malia Cohen to support more investment in affordable housing and greater community input and impact analysis on development deals as well as supporting Supervisor Peskin’s resolution to address “By-right” and his alternative “densit done right” plan, which would prevent the demolition of existing affordable housing and community-serving businesses and would allow increased density only for truly affordable units.

Advocates call on Pelosi to push the measure -- but that will be a tough battle in this Congress.
Read more
Education

Teaching Behind the Mask: Antonia Velegas and Maki Matsunami team up to build bridges and educate young children in a challenging environment.
Read more
Labor

More and more data shows that COVID transmission is happening not just at gatherings but at worksites.
Read more