I’m kind of done talking about the Yimby conference, which has gotten far more press than you normally see for a wonky housing policy event. But I have a couple of things I have to respond to.

I got this email from Sonja Trauss, one of the Yimby leaders in the Bay Area and a candidate for supervisor in D6. I have tried, as I generally do, to reach out to and respond to people who don’t agree with me, in this case Trauss.

I think life would be better for hundreds of thousands of people, and would be better for me, if a million or more people lived in San Francisco. You think life would be worse for yourself and others like you if a million people lived in SF. I understand your position, I understand that if we achieve our political goals you will feel sad. I just don’t care. Politics arises out of conflicts.

If your goal is more density in San Francisco and more people living here, that won’t make me sad. You want to add density to single-family neighborhoods? I live in one, and that’s fine with me. (Just don’t demolish housing that already exists, because that makes no sense.)

I would be sad, though, if 250,000 more rich people moved here, and tens of thousands of existing working-class folks, immigrants, and poor people had to leave.

I would be sad to live in a city with no blue-collar jobs, no light industry, a city where workers in what is going to be the largest employment areas in the future – services, hospitality, and health care – have to commute two hours from the suburbs to their jobs because the vast majority of the new housing that “the market” builds will never be available to them.

I do not worship at the altar of the God of Growth. I don’t think every city needs to be Manhattan or Hong Kong. And I think it’s crazy to build more offices and housing without the money to build the infrastructure to accommodate them.

But like most of the housing and community advocates you consider your enemies, I think San Francisco can handle a lot more people than we have, and I think dense areas like North Beach are wonderful, and I would be thrilled to see 200,000 new units of housing in the city.

Our difference with the Yimbys is that we don’t want all that housing to go to rich people. And we don’t want the private market to decide who lives here.

I, of course, like the German approach to regulating housing prices.

But beyond that, I would love to see the city build 200,000 units of new housing — affordable, social housing, aimed at the existing and future workforce, not just at the tech industry, offshore investors, and the wealthy. Housing for people fleeing oppression and wars. Housing for people who see San Francisco as a haven for the LGBT community, for immigrants, for artists and writers and the truly weird who feel out of place in other parts of the world.

If we repeal Prop. 13 and start taxing the very rich in this city and this state, we might even be able to pay for the buses and subways and schools and parks and cops and firefighters and water systems we need to handle all those new residents.

I would also like to see the Yimbys help us protect existing affordable housing by putting as much effort into repealing the Ellis Act and protecting rent control as they do into advocating more market-rate housing.

I am not a Nimby. I don’t care that much about my (nonexistent) views; my tiny back yard already gets too little sunlight to grow tomatoes. I am a homeowner who has no interest in rising property values (in fact, I wish property values in my neighborhood would come down, so people who aren’t rich could move here). I do care about the diversity of the city – and I think that what Trauss is advocating will drive out poor and working-class people and destroy the diversity (not the density) that I care about.

She disagrees with that analysis; fine. I can only believe that she seriously thinks allowing private developers and private finance to decide what gets built in San Francisco will lead to a more affordable and more diverse city. There is zero evidence that that has happened, or will happen. I think allowing the market to set housing policy will mean more displacement; it’s not only likely to fail, it will cause immense harm along the way. I feel the same way about health care, where market-based solutions have been a disaster. You like private health insurance? You’ll love market-based housing solutions.

The Yimbys say my goal of building 100 percent non-market affordable housing is a fantasy. I’m completely convinced that their idea that unlimited market-rate housing will bring prices down is even more of a fantasy. That’s the dispute. That’s it. Everything else is political diversion.

A few days after the Yimbys met in Oakland, I went to a much smaller event in San Francisco, held by a group called YAH!. That stands for Yes on Affordable Housing.

We listened to a presentation that had some reality behind it and looked at what job growth is likely to be in San Francisco, and what housing will be needed for that workforce.

The data we saw shows that over the next 20 years, the largest job growth will be in professional services, healthcare, and education. Hospitality is close behind. Tech is a footnote. 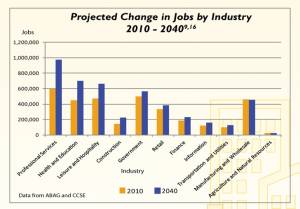 Because many of those jobs don’t pay high wages, more than 70 percent of the population growth will be people who earn less than the median regional income.

“A staggering 72% of added households will be in the lower three income categories which are not typically served by new market-rate construction,” the data shows. 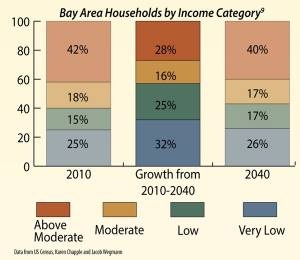 It also shows that, contrary to the Yimby narrative, the Bay Area (and San Francisco) have been building a lot of housing – in fact, we’ve been building 99 percent of the market-rate housing we need. 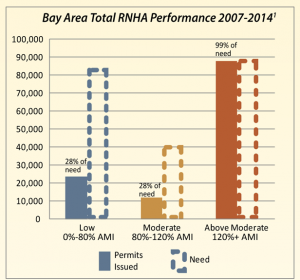 We’re way behind on the housing for low- and moderate-income people. That’s housing that, whatever the Yimbys want to say, the private market simply will not provide.

At the Yimby conference, state Sen. Scott Wiener in essence said I was a “quack” for saying the more housing makes housing more expensive. No: I said that putting high-end (which is all market-rate housing today) housing in communities of concern tends to drive up land values and lead to higher prices and displacement. That’s supported by the evidence.

Then there’s this, again from my pal Sonja Trauss

No disrespect, but the fact that you think our strategy will fail is irrelevant to me because you have a bad track record of participating in strategies that succeed. Ostensibly, for over 30 years, you have been trying to make SF “affordable.” In that time SF has become more expensive than it has ever been and the most expensive city in the U.S. So how could a person with even half a brain look at your track record and think, “that’s a guy that knows what he’s doing! He sure picked a winning strategy!”

Sonja gives me way too much credit.

If you look at my “track record” you will find that most of the policy suggestions I’ve made in my 35 years in this biz have been ignored by politicians who are much more interested in developer money than in listening to a left-wing journalist.

If I were calling the shots, if I had the “winning strategy,” there would be no new office development without the developer paying the cost of housing, infrastructure, and transit (until the developers help us repeal Prop. 13). Apple, Facebook, and Google wouldn’t have been allowed to build corporate campuses for tens of thousands of workers without first – first – making sure there was housing for them.

If I were calling the shots, there would be rent control on vacant apartments, no Ellis Act, and Airbnb would have been shut down until first – first – we had rules to prevent displacement.

If I were calling the shots, we would be taxing the wealthy at high rates to pay for social housing.

If I were calling the shots, I would have slowed down the tech boom, disrupted a little less, and given all of us a chance to adapt within a more regulated market.

If my “strategy” was implemented, I honestly believe we wouldn’t be in this mess.

So don’t blame me. I tried.

I’m done now. I don’t know what else to say.