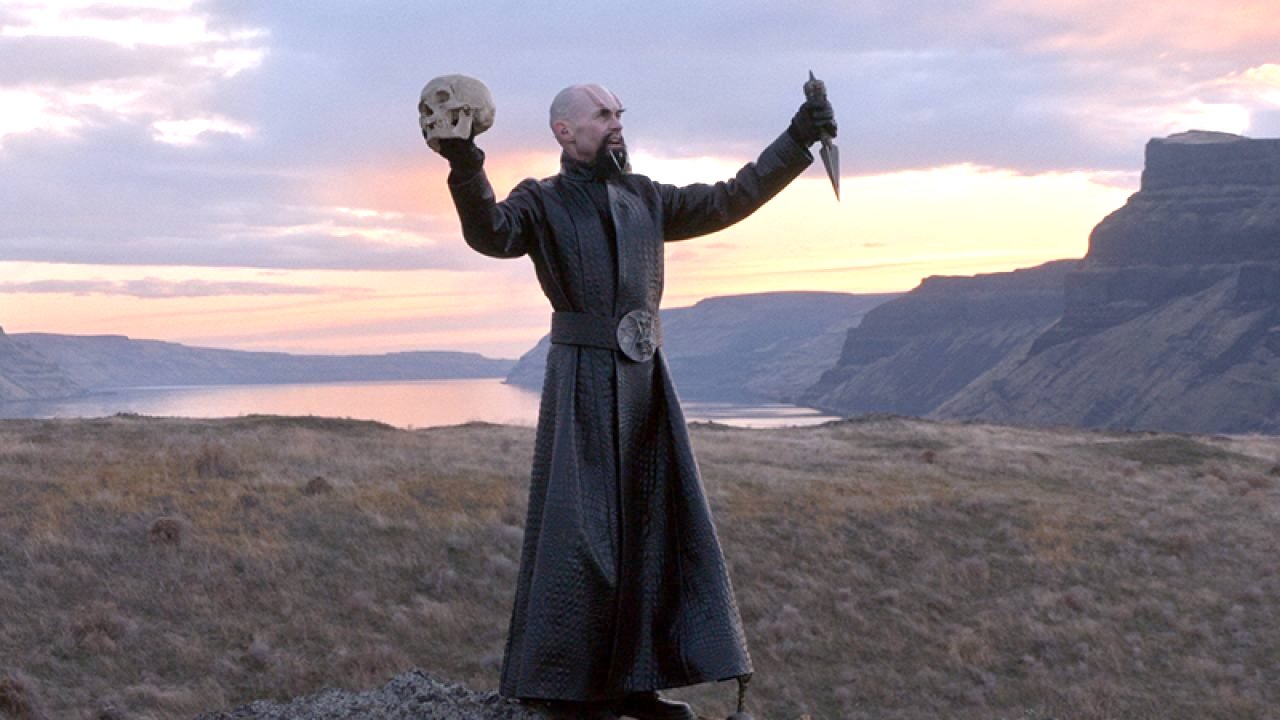 SF has a long history as a sort of devil’s playground, from the days of Barbary Coast excesses to our indictment for those dreaded “San Francisco values.” (A term greatly popularized by Bill O’Reilly, even as he was racking up the sexual misconduct cases that would eventually cost him and Fox News about $50 million to settle out of court.) But it’s unlikely most modern-day conservatives remember that one of the city’s most famous residents about a half-century ago was the nation’s most enthusiastic public booster for Lucifer himself.

The new documentary An American Satan (available on major digital platforms as of this Tues/27) provides an overview of the formerly SF-based Church of Satan and a biographical sketch of its founder, the late Anton LaVey. He created the organization in 1966, running it from the famous “Black House” residence (since demolished) on California St. until his death three decades later. Turnabout is fair play, so it figures director Aram Garriga would take on this subject—his last film was American Jesus, about some of the more eccentric US Christian sects.

Even though its members often gleefully don the stock horror-movie accoutrements of Dark Lord worship, the Church of Satan takes its name literally only in fun. It is, as one onscreen participant puts it, “an atheist philosophy that uses Satan as a symbol of pride, individualism and liberty,” whose followers “don’t worship anything” but “question everything.” As seen here, it’s like Libertarianism minus the asshole factor, emphasizing the individual’s unfettered pursuit of “freedom and joy.”

That might include generous helpings of hedonism (one latterday adherent publishes the “homoerotic occult magazine” Horns), though erstwhile police crime-scene photographer and lion tamer La Vey was personally against drug use. A professional organ player fond of Tin Pan Alley standards, he also intensely disliked the rock and metal music that eventually appropriated “Satanic” themes. He was, nonetheless, “the coolest grandpa ever,” a descendent recalls.

At a trim 72 minutes, An American Satan delivers a cursory if colorful sketch of LaVey’s life, as well as the Church’s past and present. There’s also a section rehashing the “Satanic panic” of the 1980s, when a rise in evangelical Christianity and police and media overreaction attributed a ludicrous number of gruesome deeds (murders, child molestations) to “Satanists,” though nearly all of them turned out to be imaginary. It is noted that the few real-life monsters who claimed some sort of link to Satan, like Charles Manson or “Night Stalker” killer Richard Ramirez, were mentally disturbed loners with no ties to the actual Church.

By contrast, the members we see here are often theatrically flamboyant extroverts whose carpe diem philosophy they see as “American core values” in their purest form, all about self-determination.

Of course, that’s not the kind of Satanism that fiction thrives on. Several other new streaming arrivals offer more conventional bang for your occult buck. Joshua Land and Victor Fink’s Bad Witch (likewise available On Demand Tues/27, from Gravitas Ventures) is a not-entirely-serious tale of supernatural power abuse. Xander (Chris Kozlowski) is a handsome manchild who means well, sorta. But he’s too lazy and petulant to resist using his black magic skills whenever a problem arises—with inevitably disastrous results.

Forced to flee town once again, he lands on the doorstep of an old friend (scenarist James Hennigan), is forced to get an actual job, and befriends a bullied teen (Jackson Trent). He’s vowed not to “use again,” but…well, will power is not Xander’s strong suit. Bad Witch is clumsy at times, its seriocomic tone, character psychology and other factors not always smoothly worked out. Yet it has an enterprising quirkiness that appeals.

Forced to flee town once again, he lands on the doorstep of an old friend (scenarist James Hennigan), is forced to get an actual job, and befriends a bullied teen (Jackson Trent). He’s vowed not to “use again,” but…well, will power is not Xander’s strong suit. Bad Witch is clumsy at times, its seriocomic tone, character psychology and other factors not always smoothly worked out. Yet it has an enterprising quirkiness that appeals.

Xander angrily insists he is a witch, not a warlock or wizard, because that is just how it works, apparently. A similar reversal of stock gender roles applies in the Canadian Bloodthirsty, which offers the atypical cinematic thrill of a female werewolf. Grey (Lauren Beatty) is a successful young singer-songwriter very worried about suffering a sophomore slump with her second album. She and girlfriend Charlie (Katherine King So) traipse off to record it at the secluded house of slightly-sinister veteran producer Vaughn (Greg Bryk). Turns out he and his new protege (who takes pharmaceuticals to control her “hallucinating that I’m turning into an animal”) have something in common. Hint: It’s not music.

This slow-burning tale takes its time getting to the hairy stuff, and not everything works. But from the matter-of-fact placement of a lesbian relationship at the narrative center to the credible songs heard (written by the actual young female Canadian singer-songwriter known as Lowell), Amelia Moses’ film pumps some fresh blood into familiar genre tropes.

Fifty-year-old old blood runs through those same veins in a guilty pleasure just re-released on Blu-ray by Code Red/Kino Lorber. In 1971, horror movies were going through a Satanic vogue, while the other genre cluttering drive-in screens were biker flicks. Ergo: Werewolves on Wheels, in which a rowdy motorcycle gang runs amuck on a devil-worshipping cult’s land, getting cursed with…uh, you can guess. After two of their number are found ripped to shreds in the desert, one uneasy rider comments “That was no accident! It was heavy! Someone’s controllin’ the vibes!”

With its groovy acid-rock soundtrack, above-average photography, weird cast (including Billy Gray from 50s sitcom Father Knows Best and Barry McGuire of Sixties Top 40 hit “Eve of Destruction”) and near-plotlessness, this is the kind of bad movie that grows on you, especially after several beers. It was the first directorial feature for Michel Levesque, whose second/last one, the next year’s Sweet Sugar aka She Devils in Chains, was arguably the most deliriously absurd of the era’s women-in-tropic-prison exploitation movies. (It contains a singular scene in which sexy convicts are tormented by having rabid cats dropped on their heads.)

Other recent releases of note:

New Documentaries: Activism in the Congo and the AIDS Era

Two new non-fiction features now available for streaming from Roxie Virtual Cinema chronicle citizen activism at its most energetically committed. Downstream to Kinshasa (more info here) charts long-term fallout from the other Six Day War—not the 1967 Middle Eastern one, but the June 2000 melee in which citizens of the Democratic Republic of the Congo found themselves targeted by opposed Rwandan and Ugandan forces amidst the Second Congo War.

At least a thousand were killed, and another 3,000 or more wounded, many losing limbs. Dieudo Hamadi’s film captures some of them, including double or quadruple amputees, deciding to force their case after years of pleading in vain for recompense from the government. They send a delegation to the capital city, perilously traveling there on boats. That journey of protest is intercut with scenes from the survivors’ agitprop theater, in which they reenact their own war traumas to cathartic effect. It’s an uphill battle against ongoing great injustice, but the furious courage displayed is inspiring.

The homefront is much closer to home in Thanks to Hank (more info here), which Frameline release Outlook is streaming (as a benefit for Coalition on Homelessness SF) via Roxie Virtual Cinema through April 30. Bob Ostertag’s local feature tells the story of late longtime San Francisco activist Hank Wilson, who began the Gay Teachers Union in 1975, co-founded the Harvey Milk Gay Democracy Club shortly after, and went on to be a major (but self-effacingly modest) figure in advocacy for gay youth, the homeless, Persons With AIDS, and much more.

Though his sole run for political office (the Board of Supes in 2000) was unsuccessful, he continued to have a considerable influence on politics in the city and beyond until his death at age 61 in 2008. Thanks draws on reminiscences from contemporaries including Blackberri and Lea DeLaria—both among the many performers who got their start at cabaret Valencia Rose, which Wilson also co-founded. It also has animated sequences by Jeremy Rourke, music contributions from Kronos Quartet, and appearances by SF’s own Sisters of Perpetual Indulgence.

Comparatively lightweight fare—untroubled by supernatural menace, war crimes or a health crisis—is offered by Nikole Beckwith’s pleasantly low-key comedy, which is currently playing actual theaters including the Embarcadero and Shattuck. (It’s available on digital platforms as of May 11.) Ed Helms and Patti Harrison play two very different people brought together by unusual circumstances: He’s a fortysomething single man (apparently heterosexual) who has decided he wants to raise a child alone. She is a somewhat rudderless twentysomething who agrees to surrogate-carry that child created by his sperm and an anonymous donor’s egg, for a fee of course. In addition to regular pregnancy-monitoring medical appointments, they see a counselor, attend separate support groups, and so forth.

In short, they are addressing this task very conscientiously, which is good because otherwise they might drive one another mad. His Matt, in particular, is so persnickety, insensitive, and invasive of her privacy that you often wonder early on why her Anna doesn’t just bail on the whole deal. Nonetheless, they eventually find a mutually beneficial rapport. This too is fortunate, because nearly everyone else in their lives is even more annoying than Matt, including his obnoxious mother (Nora Dunn), her obnoxious cafe coworker (Julio Torres), etc..

Many of these performers are comedians. Together Together suffers somewhat from a pull towards comedy writing rather than creating fully rounded characters—these people live too much in isolation, with practically zero backstories. Why doesn’t well-off, self-supporting Matt ever seem to go to work? Why doesn’t hip, personable Anna appear to have any friends? These aren’t deliberate omissions, just things the script never notices are missing.

Nonetheless, there’s a lot to like here, from a pokerfaced support turn by Tig Notaro to one very funny late scene at rather alarming pre-natal class. The film’s best single element is Harrison, a trans performer playing a cisgender straight woman. She’s also a comedienne, yet this droll, poised first major big-screen acting role manages to give the movie some of the ballast it needs. While Anna may be sketchily written, Harrison somehow fills in the blanks, lending her a jaded vulnerability that is instantly familiar and relatable—it’s the wariness of someone who’s barely started their adult life, but has already suffered enough crushing disappointment to wonder if it’s even worth it. She’s waiting to be proven wrong, and there’s satisfaction when the movie finally does just that.

Previous articleSo what happens to all that empty downtown office space?
Next articleRIP, Shock G: Local musicians share their memories

Impressionistic 'official documentary' proves as complex as the music idol and artist—at points even more so.
Read more
Sponsored link