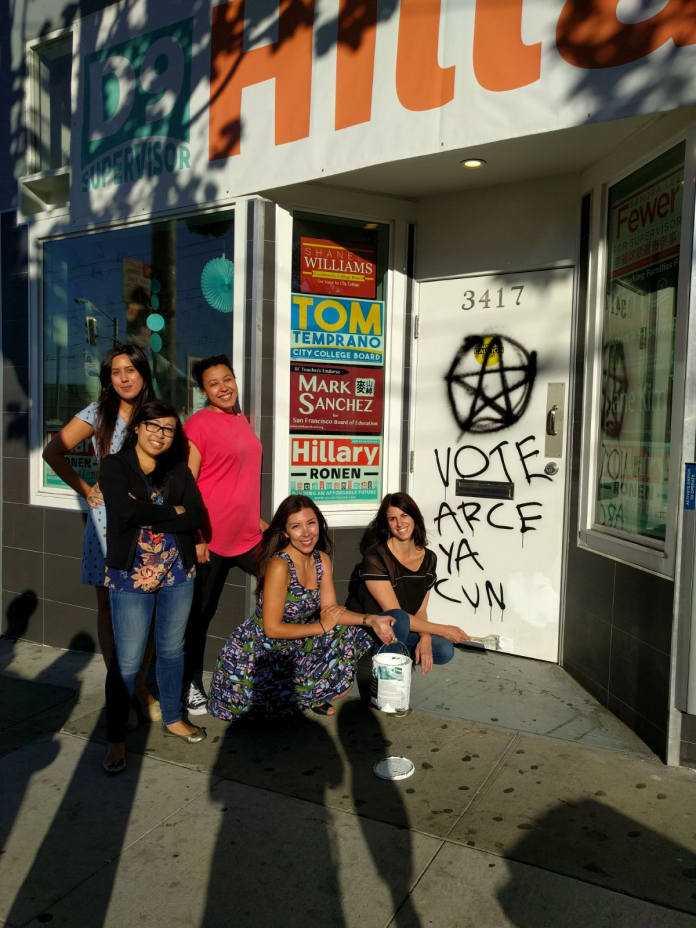 If the San Francisco election wasn’t strange enough already, it just took a dive off the political deep end.

Check this out: In District 9, a staffer for Josh Arce got what is apparently the only copy of a surveillance video of the people who painted sexist graffiti on his opponents’ door and held onto it for at least a week, without mentioning a word to the authorities, before finally turning it over to police.

The owner of the gas station who gave the video to Arce staffer Gladys Soto told KPIX he thought she was the landlord of the defaced building.

The Arce campaign admits that Soto was sent off to play private detective, to scour the area for possible video.

The Arce campaign gave me the following statement:

“We were able to obtain a copy of the gas station footage at the end of the week following the incident. We spent the next week reviewing what we had and looking for additional cameras and information, before turning everything we were able to obtain over to SFPD between the following weekend and Monday, just as SFPD was opening their official investigation.”

Why would Arce send people out to investigate a graffiti incident that had nothing to do with him? (Nobody has seriously suggested that Arce knew about or authorized the tagging, although from the message it carried – “vote for Arce ya cunts” — suggests that the people who did it support Arce.)

The Arce campaign is not the SFPD, and frankly had no business taking a surveillance tape that could be evidence in a crime and “reviewing it” under what seem to be at best dubious circumstances (would the gas station owner have given it to someone who identified herself as a political campaign staffer?)

If the Arce campaign had the only copy of the video, as it appears, what if it got lost or damaged (or the campaign decided not to turn it over to the cops?)

Soto, as far as I can tell based on state records, is not a licensed private investigator nor is she a reporter for any local media outlet (and by the way, news outlets that get stuff like this tend to publish it, not sit on it for a week).

So why did Arce want the video?

I can’t take seriously this claim that the Arce campaign was spending its own time and resources on some sort of civic-minded effort to “solve the crime.” Soto is neither trained nor equipped to do that. And “solving the crime” has no benefit to Arce.

But if the two figures were identifiable as Arce allies, it would be greatly beneficial for him to know that in advance of any release (or for the video to be damaged).

The only other possible reason: This truly strange Birther-style rumor that has come out of some corners of the Arce-allied world that somehow Ronen did this to herself. Arce has gone on Facebook insisting very loudly that he has never said any such thing.

So: Why the gumshoe stunt?

As it turns out, the video doesn’t show much anyway – two grainy figures in black who can’t be easily identified. The police sergeant doing in the investigation won’t call me back. The Police Officers Association is pouring money into an independent-expenditure committee that supports Arce.

There is good news out there, if you know where to look, and on Friday we got a tip that some of the member of the Saint Ignatius High School football team, led by the African American players, would be taking a knee during the national anthem before a Saturday game against rival Archbishop Riordan High.

Why is this particularly relevant? Well, a startling number of the police officers in San Francisco, particularly the top brass, graduated from SI. Ditto Riordan. Police Chief Greg Suhr was an “SI guy.” You could make a long, long list of the people who have had senior roles in politics and law enforcement in this city who are SI grads. Sup. Mark Farrell went there. Governor Jerry Brown is an alum, as was former Mayor George Moscone.

So it was exciting for us to see that some young people at a conservative Catholic school where the next generation of cops may be studying had the courage to take the Colin Kaepernick knee, to stand up for Black Lives and against police abuse – and it was encouraging that some of their teammates, who remained standing, put their hands on the kneeling players’ shoulders, apparently to show support.

We don’t particularly care who won the game – the SI players won us over.

The Bernie Sanders organization is looking at local races — Bernie’s endorsement of Jane Kim for state Senate was a big deal in the June primary. And now the group, Our Revolution, has decided to endorse Dean Preston for supe in D5. He is, I believe, the only candidate for a Board of Supes slot in the state who got the Bernie nod, which makes this a pretty big deal.

The San Francisco Police Commission is declining to release the names of the finalists in the job search for a new chief. That’s yet another example of the serious lack of transparency in a deeply troubled department. The supes, who don’t control the SFPD but do oversee its budget, will get a chance to ask Department brass how reform efforts are going (or not), and the public will have a chance to speak out Tuesday/6 when the full board holds a hearing on the findings of the district attorney’s Blue Ribbon Panel on police accountability. The hearing is set to start at 3pm in the board chambers at City Hall.

The Government Audit and Oversight Committee meets Friday/7 at 10:30am for a hearing on a Civil Grand Jury report called “San Francisco County Jails: Our Largest Mental-Health Facility. True, that: After many years of cutbacks, the mental-health system at SF General is constantly overwhelmed; there aren’t anywhere near enough beds or staff, and people with serious problems, some of them homeless, are sent away with a bottle of meds and a best-of-luck. The overworked, often heroic staff does the best it can, but the city doesn’t make this a financial priority.

So instead, mentally ill people wind up in the county jail.

There was much talk when the supes decided not to build a new jail of creating instead a residential mental-health treatment facility. It would go a long, long way toward addressing a lot of the city’s public-health, safety, and homelessness problems.

Absentee ballots for the November election will start arriving in the next 10 days. Early voting at City Hall begins Oct. 11. You can register to vote until Oct. 24. It’s pretty easy to vote in SF; please do.