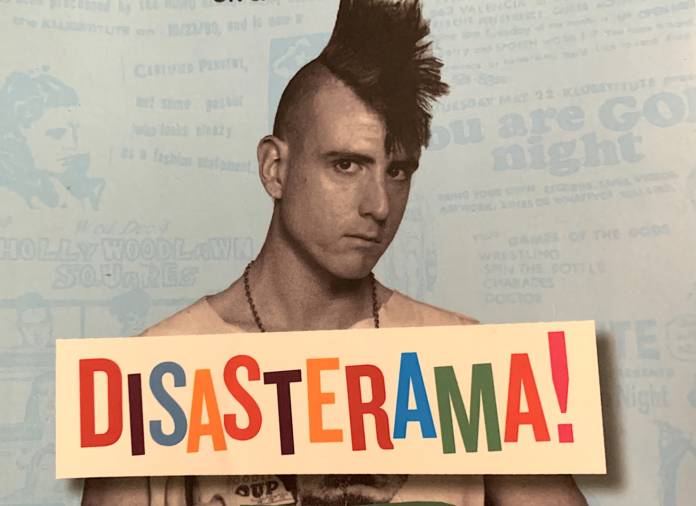 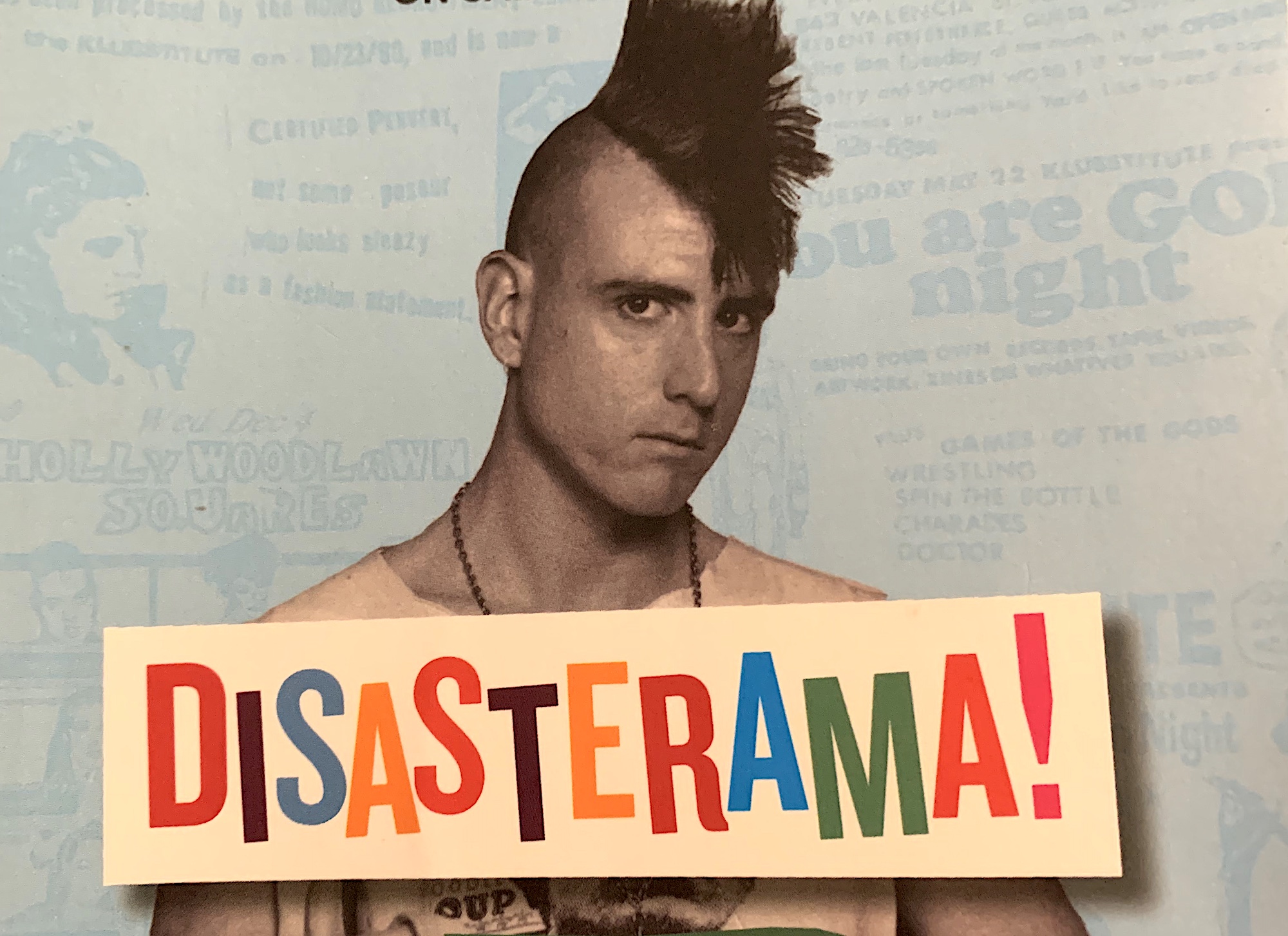 A certain queer generation has come of memoir age—which is a bit bracing (read: terrifying) for those of us who survived the ’80s and ’90s, and still consider ourselves in the prime of some type of youth. Earlier this year saw the release of Marc Huestis’ gossip-dripping Impresario of Castro Street as well as photographer Melissa Hawkins’ blockbuster “SoMa Nights” show at the GLBT History Museum, which captured SF’s queer nightlife during the height of the AIDS epidemic here.

Orloff was an essential player in so much of what we now consider SF’s last artistic gasp before the Internet Boom and sky-high real estate prices made tech money, not personal expression, the driving force behind Baghdad by the Bay. From young Polk Street denizen and Tenderloin stripper to co-founder of institutions like The Popstitutes band, performance collective/event Klubstitute, and outrageous Baby Judy’s party—with stops at every hot scene spot in between (Club Chaos, Club Uranus, Sick & Twisted Players, underground zines)—the Bay Area native spills it all in a compulsively readable book that will have you swimming in fabulous looks and wayward dreams of yore, and probably some tears as well.

Now the manager of Dog-Eared Books in the Castro, in the book Orloff is a questing, wide-eyed soul whose sensitive observations of the minutiae and meaning of the times come through in wonderfully twisted incidents. “I’d known most people didn’t like homosexuals,” he writes after hearing an old woman defend Harvey Milk’s murderer on a bus, “but I hadn’t realized so many wanted us dead. This was scary and annoying, yeah, but also thrilling. Being disliked is a wishy-washy experience compared to being homicidally detested.”

Throughout most of this “true story of how a bunch of pathologically flippant kids foundered through a deadly serious disaster,” Orloff’s artistic life and destiny are deeply intertwined with those of his best friend Michael, who later takes the name Diet Popstitute. The hyper-intelligent quips and deep theoretical analyses of relationships and politics, delivered with several strong substances and outlandish projects at hand, fly fast and furious—but not in that tired old bitchy queen way. Diet’s wild pronouncements often come like refreshing slaps to the reader’s face. This is the sis/bromance that defines Orloff both in the heat of friendship and in Diet’s characteristically confounding death from the disease, which wipes so many brilliant characters out of Disasterama!’s narrative.

Orloff is honest, too, about the psychic toll it all took, from plainly confessing he didn’t have the will to be directly politically active during the heyday of ACT-UP and other such orgs (he reasons that maintaining creative nightlife while others took care of the die-ins was also important), to exploring in his final chapters how the simultaneous deaths of Diet and his beloved mother—plus the weird conservative turn gay culture took once medications made HIV manageable—knocked him out of underground club culture for a more quiet life. We are all still dealing with that period’s trauma, and Orloff ably illustrates how it continues to affect us in different ways. One miracle of the book is that it’s not bitter at all, when it has every right to be.

I caught up with Orloff over email (he’s written movingly for 48 Hills in the past) and asked him a few questions about sex, hair, and how the scene he memorializes lives on.

48 HILLS I had to laugh when you started to talk about your experience as a call boy in the ’80s, placing an ad in the back of the Bay Area Reporter. I remember moving here, taking one horrified look at those ads, and feeling so vanilla that I swore off sex until I could figure out what my incredibly niche fetish was! Do you remember what your ad said?

ALVIN ORLOFF I’m woefully short on fetishes, so the ad was pretty generic. I find the subplot about my sex work embarrassing, not because I think there’s anything wrong with sex work, but because I wandered into it out of laziness and psychological discombobulation. I ultimately decided to include in the book both for comic relief and because I thought it was important to let the world know that not all sex workers are vacuous bimbos with sad, dead fish eyes like Melania T.

48H I loved the detailed, often raucous descriptions of what people wore throughout the book— including updates on on your latest hairstyles. What are some of the hair creations you thought were the most ‘successful’ in terms of building your image, or that you just liked the most?

AO Oh gosh, I didn’t mention 90% of my hairstyles. I liked my leopard print hair, but it didn’t like me. Ditto with chartreuse. I tried tiny little braids in front like Adam Ant, and that was pretty cute for a minute. And I used to be fond of bleaching my hair then using red cellophane for a translucent ruby effect. My favorite product, which no longer exists, was Let’s Jam Hair Pudding. It was an electric lavender color and smelled almost like a sweet bathroom disinfectant, but somehow delicious.

48H Some of the most fascinating sections in the book for me are about your time with the Popstitutes and Klubstitute. Can you share a little bit about what that era was like in SF Clubland—and if you think that sort of confluence of talent and outrageousness can happen now in SF?

AO I actually have no idea how 21st century queer clubland differs from that of the ’80s and early ’90s because I’m now elderly and fall asleep at 11 o’clock. Friends have told me modern nightlife lacks the wild intensity of the Olden Days. If true, that makes sense because the horrifically high death rate from AIDS really fed into a strain of mania back then. So many people were trying to pack a lifetime’s worth of fun into the few short remaining years they had left. Also, we were deliberately flaunting our sexuality and gender-bendering in order to annoy the bigots who wanted us dead. Anti-LGBTQ prejudice is less intense now, so there’s not the same need to react against it quite so intensely. And finally, more people had to go out at night in the 20th century because there was so much less to do at home: no internet, no phone apps, and let’s not forget that TV back then was TERRIBLE. 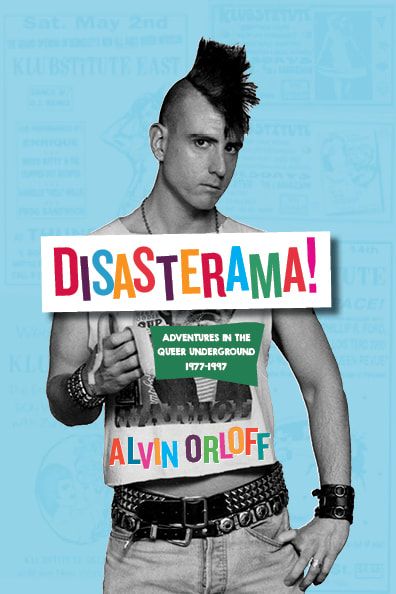 48H Flipping through the middle of the book, which contains so many photos, flyers, and ephemera of famous people and parties was such a time machine. The Vegas in Space cast, Jerome Caja, Justin Vivian Bond, Jennifer Blowdryer, Diet Popstitute … What was it like to compile both the images and your memories in the book, knowing so many of these people are gone?

AO Being in my autumn years, I’m already prone to wistful nostalgia, and writing about my departed comrades and the vanished world of our youth often pushed me into full melancholy. I kept writing anyway because I felt my pals deserved someone singing their praises for refusing to play the tragic roles fate assigned them and remaining fun, funny, and vivacious right up to their untimely ends. Also, being a writer, I could see that my youth had the makings of a terrific story, what with all the life-and-death drama, unusual characters, morally ambiguous conflicts, and comical subplots. Only a fool would throw away such good material! Not to mention, I think memoirs are great for giving people an idea of what it was like to live through a particular era, adding color and texture to the historical record.

48H The aesthetics of the ’80s and early ’90s SF queer underground really revolved around what you point out as “retro-camp,” from the Sick & Twisted Players’s outrageous musical productions to the fetishization of ’50s kitchenware, rhinestone studs, and bakelite jewelry—but with a punk sensibility, as well. I love this distinction you make in the book: “Good retro-camp is nostalgic, but in a productive way, like cleaning out your attic. Bad retro-camp asks people to laugh at the the fashions and sensibilities of yesteryear, simply because they’re outdated. What do you think happened to retro-camp, or camp at all? I’m thinking of the recent Met Ball disaster, and also just any sense of underlying appreciative humor in the styes of today …

AO Not an easy question! I suspect the retro trend faded because one can no longer find fabulous Midcentury Modern products or clothing in thrift stores, and reviving the hideous styles of the 1990s and early 21st century is an unappealing proposition. (What makes some products fab and others hideous? I’d say it’s the degree of optimism embedded in the design semiotics, but that’s a discussion for another day.) As for the camp sensibility, it’s still there—see: “Feud”—but has perhaps lost some of its zing in becoming mainstream. And although my apartment still looks like a ramshackle version of a swinging bachelor pad from 1968, I don’t lament the passing of retro camp. The culture has moved on and we have all sorts of new trends to explore. I think it’s great there are now something like 37 sexual orientations and gender identities to choose from!

48H Finally, you write so deeply of your vital, infuriating, overwhelming friendship with Diet Popstitute. How do you see his rambunctious spirit living on today?

AO Diet was was a human catalyst who could instantly alter the social chemistry of any situation using wit, flattery, needling questions, and pure blarney to nudge people out of their established roles and habits. This was part of his crusade to destroy social hierarchy and upend convention with the ultimate goal of making the world as a fairer and less boring place. Results varied, but nobody who met him ever forgot him. Does his rambunctious spirit live on? Absolutely! It’s there whenever a teenage boy decides to paint his nails green, or a secretary uses the office printer to put out her poetry chapbook, or someone with no theatrical experience decides to put on a play. It’s there whenever playfulness, glamour, and whimsy are employed against the self-serious bourgeois stodginess that can make life so very un-fun.