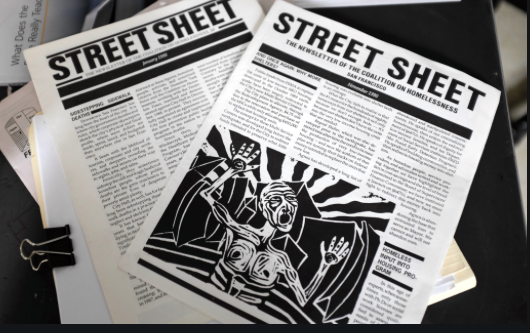 Since 2001, I’ve been involved with Street Sheet in some capacity — at first as a freelancer, and now as a sort-of managing editor —  but my relationship with the Coalition on Homelessness’s newspaper began long before it printed my first article that year.

I started buying Street Sheet from vendors when I moved to San Francisco in 1994. A friend told me, “That’s the paper homeless people sell for a dollar.” I learned that the vendors keep every penny, and I thought, “That’s cool. I get reading material, and they get spending money.” It blew my mind when I realized its writers and publishers themselves knew homelessness firsthand.

Back then, I was also shocked by the concentration of visible homelessness and deep poverty in San Francisco — more in a single block of the Tenderloin than anywhere in the entirety of the small New England towns where I previously lived.

I arrived in the city at the onset of the 1990s dot-com boom, yet I was able to move into a cheap apartment in the Lower Haight. San Francisco’s history has always been that of a gold rush town. In 1849, prospectors mined for newly discovered gold. When I arrived, the tech industry migrated in search of a mother lode. Today, wealth is mined by tech companies, venture capitalists and real estate speculators.

Meanwhile, housing costs soared; longtime and lifelong residents were displaced. Some left town, while others moved to the city’s streets — or, should I say, morepeople moved to the streets. The federal government had already been disinvesting in affordable housing programs since the late 1970s. The numbers of unhoused people increased in the 1980s when people who were poor, but housed, lost their housing. Throughout the 1990s under so-called “welfare reform,” benefits were cut or else restrictions were imposed on people receiving them.

Since San Francisco is The City That Knows How, one would think it would offer a helping hand to unhoused residents. Its response? Criminalization – under six mayors.

Frank Jordan policed homeless people under his Matrix program. Willie Brown, his successor, oversaw a growing pile of homelessness-related citations while he removed benches from the United Nations Plaza and closed down the Mission Rock shelter. Then-Supervisor Gavin Newsom persuaded voters to approve a cut in welfare benefits, and later as mayor, moved them to add another sit-lie sidewalk ban. Ed Lee and Mark Farrell made encampment sweeps their signature strategy, which London Breed continues to this day.

I never saw anybody housed as a result of these police actions.

Neither did anyone I interviewed for Punishing the Poorest or Stolen Belonging, feature stories based on peer-based research projects I worked on in 2015 and 2019, respectively. If anything, citations and incarcerations for homeless acts prolonged their homeless episodes.

But I did see people impacted by these policies speak out against them. I heard them offer solutions, especially at City Hall, where they spoke in public comment at board meetings and lobbied elected officials. I saw them walk precincts and phone-bank in electoral campaigns against slashing welfare payments in 2002, sit-lie in 2010 and the tent ban in 2016, and advocating for taxing wealthy corporations to shore up housing and homeless services last year.

Over the years, I’ve seen those election campaigns — as well as budget justice coalitions and the ongoing outreach by the coalition’s human rights and housing justice workgroups — build community among people not usually included in public discourse. Along similar lines, the intersection of various communities’ interests makes its way to the pages of Street Sheet before the rest of the media catch on. In recent years, Street Sheet published special editions on shelter clients, Black History, LGBTQ Pride and sex work. The Art Issue precedes the Annual Art Auction each September. The poetry edition that runs every January remains popular among vendors and readers alike.

In my time at Street Sheet, the paper has worked with other media outlets and shared their reportage, prose, poetry, photography and artwork. Among them are Street Spirit, Poor Magazine, the International Network of Street Papers, the San Francisco Bay View and 48 Hills. Recently, Street Sheet also ran work appearing in Invisible People, Capital and Main, CALMatters and Them.

Street Sheet’s distribution depends largely on its vendors, many of whom have lived the experience of homelessness. Even back in 1994, at the dawn of the internet era, the idea of a “street paper” was novel to me. That Street Sheet started publishing just six years earlier might have been the source of that novelty.

Yet something radical could happen in that interaction between vendor and customer: Money may change hands, but at the same time they share a common humanity.

We made some improvements in the vendor program I wish we made earlier. When we moved to our new office space at 280 Turk St., elevator access for our disabled vendors has been improved. We also instituted a cashless payment system: Vendors can now accept money through Venmo. We’ve also been running features on our vendors.

Since I bought my first Street Sheet in 1994 and published my first story in 2001, I’ve explored the ins and outs of the subject and deepened my understanding of the homeless experience. I hope one day that with a little luck and effort, I’ll live to hear somebody say, “That’s the paper homeless people sold when there used to be homelessness.”

TJ Johnston is a San Francisco-based journalist and assistant editor of Street Sheet, a publication of the Coalition on Homelessness. Street Sheet can be bought from vendors for a suggested $2 donation, in cash or by Venmo. It can be read online at streetsheet.org.