There’s a huge amount of money going into the campaign against the four measures that I call “Definitely Helps Limit the Mayor,” Props. D, H, L, and M.

And there’s a huge amount of money going to support the moderate candidates for supervisor. 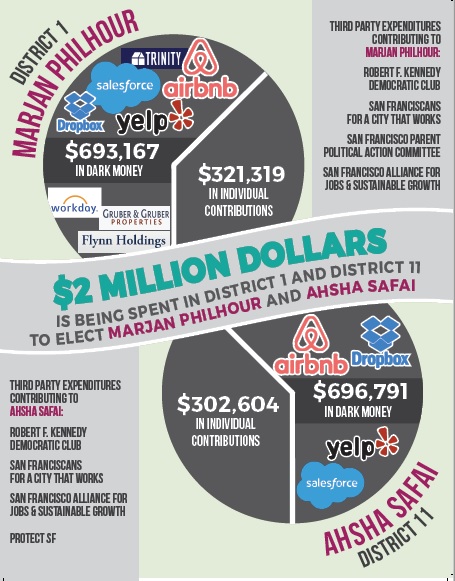 And all of this reflects two critical issues: The big money that tech companies and investors are making – or could lose – through San Francisco’s regulatory process, and the very real possibility that the Board of Supes we elect Nov. 8 could chose the next mayor.

This is the first year that we’ve seen this level of money from the tech industry funneled through various front groups to local candidates and ballot campaigns – we’re talking millions of dollars. Tech is replacing developers and real-estate interests at the dominant money in the local game.

But to the donors, this is chump change – considering how much they stand to benefit (or how much is at risk) from the decisions that the board and the mayor make in the next couple of years.

Let’s look at Airbnb, which has put $100,000 into local campaigns this fall, and Ron Conway, who has put up almost as much.

Airbnb will probably try to go public in the next year or two. When that happens, the early investors (like Conway, who was one of the first in the door) and the current management stand to make billions of dollars.

If San Francisco strictly limits the company’s ability to turn housing into hotels, and other cities start to follow suit, then the IPO value could go way down. San Francisco is where the company started; San Francisco sets trends for cities all over. Billions at stake for just one company, based on who runs San Francisco.

It’s a huge financial windfall for Big Tech on the Peninsula to have the Google buses allowed to pick up and drop off workers in San Francisco neighborhoods. The thousands of people who ride those buses don’t miss any worktime commuting; they get to ride in comfort on wi-fi-equipped coaches – and several tech excs have said that they don’t worry too much about traffic, because their employees are working just as hard and effectively on the bus as they would be in the office.

Now add in Uber (again, ready to go public with an absurdly high market valuation that could shrink by billions if cities start regulating ride-shares like taxis). Think about the Twitter tax break and all of the trends that start here and spread – and you’re talking tens of billions of dollars.

Giving a million or two to make sure than nobody’s going to mess with the gravy train is a no-brainer.

Then we have the four measures that somewhat limit the power of the mayor, D, H, L and M.

Sean Parker, the first Facebook president who doesn’t live in San Francisco, can’t be that worried about whether the city has a public advocate or who oversees Muni. So why did he put $240,000 into a campaign to stop those props?

Easy: He doesn’t care about that sort of stuff, but he cares a lot about Mayor Lee being his friend.

Parker was one of the early partners in Founders Fund, which was also an early investor in Airbnb.

Why do Google, Instagram, Conway, Facebook, and Mark Benioff, the founder of Salesforce, care who is the supervisor from District 1, 9 or 11? None of those companies have offices in those districts. None of the rich execs live there. Why is it such a big deal to elect moderate-to-conservative candidates like Josh Arce and Ahsha Safai?

Let’s go back to the start: The next board could leave the industry alone – or enact what could be hugely expensive new regulations.

And I think this is even more important: These folks know that it’s entirely possible – I would say even likely – that Ed Lee will not finish his term as mayor. The Hill reports (thanks to SF Examiner for the heads-up) that Lee is on the short list as a member of Hillary Clinton’s cabinet, maybe as secretary of Housing and Urban Development. He clearly isn’t having fun as mayor, and his popularity is so low that he can’t even endorse a candidate or a ballot measure in this election.

If he leaves, the Board of Sups will select his replacement – with six votes. That person will have almost three full years to build a base, cement an incumbency, raise money … and we may be stuck with him or her for another seven years.

When I first started writing about this a few months ago, a lot of people said I was nuts. Now: Mainstream reports that he could wind up in Washington.

And let me repeat in case you didn’t get the message: The people we put on the Board in five days may end up choosing the person who leads San Francisco until I’m old enough to collect Social Security.

And the tech industry knows that, and is pouring money into making sure that that person is, for their purposes, another Ed Lee.

I tell everyone who is willing to listen to me that you shouldn’t vote on these measures based on what you think about this mayor, who at the very most has three years left. Think about long-term policy.

The San Francisco City Charter creates a very powerful chief executive. The mayor oversees the City and County, and thus the budget of everything from the airport to the county hospital to the sheriff, public defender, and district attorney. In the rest of California, those are typically county functions, under a county board.

The mayor of SF can fill a vacancy in any elective office, including the DA, the sheriff, the treasurer … in other places, those are filled at the county level, not by any mayor.

The mayor appoints the majority or the entire membership of nearly every local commission. The mayor, unique I think to any similar office holder in the state, has the authority to unilaterally suspend from office any city or county elected official – in essence, to impeach anyone elected by the voters – for as long as it takes for the Ethics Commission and the Board of Supes to hold a trial and decide whether to remove that person from office.

There are people who argue that it’s good to have one person in charge, and thus one person accountable. If the voters don’t know who to blame for city failures, and if elected officials can point fingers away from themselves, then ineffective or corrupt politicians can get away with doing a bad job.

But in an era when the defining issue of political life is the influence of big money, and when big money is a bigger factor in electing the mayor than in district supe races, there’s also an excellent argument that defusing the power of the chief executive and spreading that governing authority around makes sense.

Prop. D eliminates the power of the mayor to fill vacancies on the Board of Supes. Prop. H creates a public advocate. Prop. L gives the supes more authority over Muni. And Prop. M creates a commission to oversee the Mayor’s Office of Housing.

If all four win, the power of the mayor – not just this mayor, but future mayors – will be somewhat diminished.

That’s why one of the mayor’s closest advisors, Tony Winnicker, took a leave from City Hall to run the No and DHLM campaigns. And it’s leading to some very bizarre ads.

One of the most interesting: A TV piece, accompanied by a mailer, featuring Alicia John-Baptiste, who is deputy director of SPUR. She says that “the last thing the city needs is another politician” with a “six-figure salary” and a staff.

In New York, the public advocate has a six-figure salary and a much bigger staff – and by pretty much every account, that office saves the city vastly more by exposing waste and fraud than it costs. That is often the case with effective public oversight agencies – they save more than they cost.

But here’s the fascinating twist: John-Baptiste, who is against “six-figure salaries,” worked for Muni as a manager before she went to SPUR, earning an average of $244,000 a year in salary and benefits.

But it’s a bit of a stretch for someone who made a very nice salary working for the city to denounce “six-figure salaries” for public officials.

Here’s what John-Bapitste told me:

I am not quibbling with what people get paid. I am quibbling with the structure of government that is being contemplated — in this case, a proposal to create one more elected position, along with supporting staff, that will have no responsibility to actually implement public services, but will instead be a full time critic of the people who do have implementation responsibility.  I don’t believe this would result in a stronger or more effective public sector.

Hmmm. Do we need a “full-time critic of the people who actually have implementation responsibility?” Given some of the “implementation” in the past few years under Mayor Lee, one could argue that it wouldn’t be such a bad thing – and in fact, what John-Baptiste says is a bad idea is the essence of the case for Prop. H.

(Oh, and if she wasn’t concerned about what the person gets paid, why the swipe at the “six figure salary?” That’s because it makes for good political hype, even coming from someone who clearly is not opposed to six-figure salaries.)

It’s also a bit odd to hear the arguments against Prop. D, which would mandate an election to fill vacancies on the Board of Supes. We hear that it’s expensive (democracy is expensive, get used to it). We are also told that it’s not a good idea to have a “caretaker” supervisor who can’t run for a full term – from the same mayor who promised when he took office that he would be a caretaker and would never run for a full term.

Another element to all of this: If D passes, there will be a special election to fill the seat of either Sup. Jane Kim (D6) or Sup. Scott Wiener (D8). Again, control of the board could be at stake. Would Lee still be around long enough that the new board, after that election would pick the next mayor? Of would he leave early in the spring if the moderate pro-real-estate, pro-tech folks get their majority back?

Keep this all in mind when you vote.