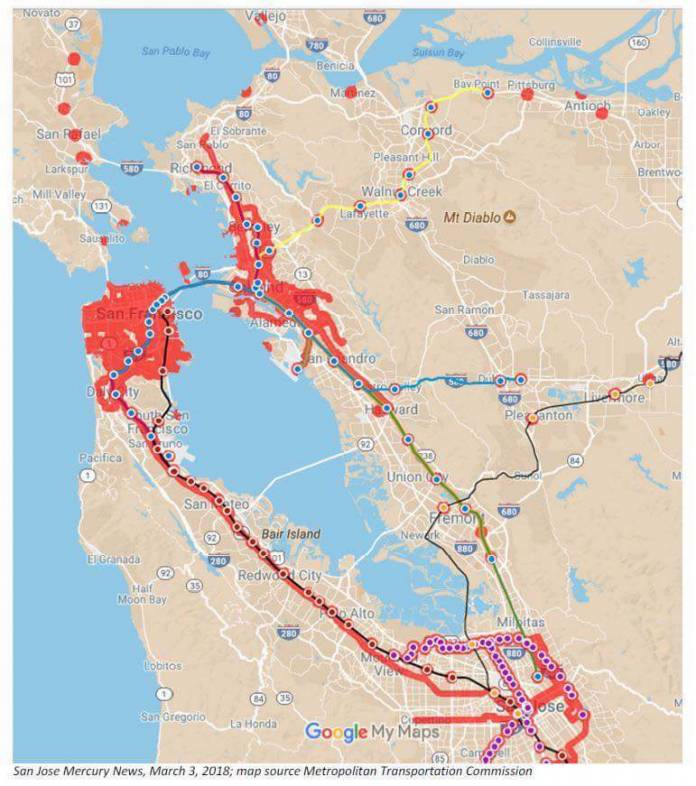 Most of the time, when San Francisco supervisors ask the board to weigh in on a state or federal issue, it’s just an agenda item at the end of the meeting. Most of the time, it’s pretty non-controversial.

Not so with Sup. Aaron Peskin’s proposal to put the city on record opposing SB 827, the bill by state Sen. Scott Wiener that would in effect upzone the entire city.

Peskin asked for a hearing Monday at the Land Use and Transportation Committee, to give the public a chance to weigh in on the measure. And weigh in they did: Although testimony was limited to one minute per person (since committee member Ahsha Safai had to leave early and Jane Kim wasn’t there), the hearing lasted more than two hours. There were Yimby folks who supported the bill, but the overwhelming majority of the speakers opposed it.

Some of the people who like the Wiener bill said that it was harder for renters who are working to show up at the hearing – fair enough (although the SF Tenants Union is strongly against the bill). But Peskin said that his office had received more than 100 emails urging the supes to oppose the bill – and only a handful supporting Wiener’s position.

The hearing, and the debate, brought again into focus the dramatic disagreements over housing policy in San Francisco – and the willingness of our entire legislative delegation, along with such “liberal” officials as Berkeley Sen. Nancy Skinner, to go along with free-market ideology.

In the end, the panel (with Peskin seated as a temporary member) agreed to pass on to the full board a proposal to call for amendments instead of opposing the bill outright (the chair, Katy Tang, still seems to think this measure can be salvaged).

But along the way, we learned some interesting things:

For starters, the bill is supposed to encourage housing along transit lines and deal with the Bay Area’s housing shortage – but in reality, it mostly affects San Francisco. Peskin held up this map, which shows where the upzoning would take place: 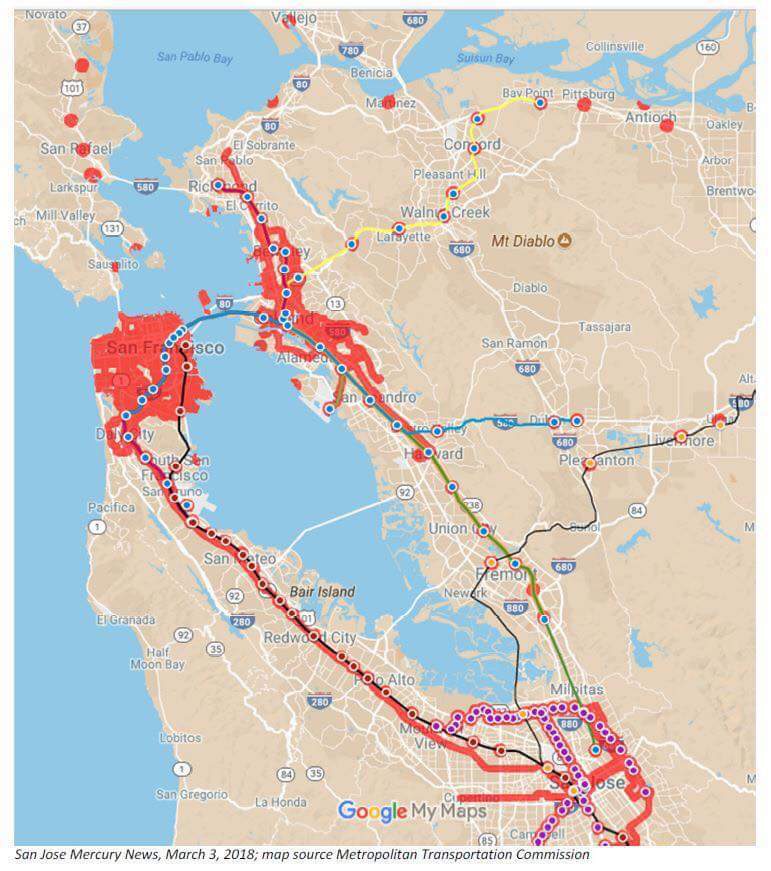 The suburban communities that have accepted huge amounts of tech office space can stay low-density, since they don’t have much in the way of transit.

Then there’s the problem that the bill gives cities no additional money for the transit infrastructure they will need to meet the demands from increased density. “It will continue to burden our infrastructure,” Peskin said.

Put tens of thousands of new housing units on existing bus lines, and someone has to pay for more buses and drivers.

But Peskin raised two bigger issues: Displacement and the ability of landowners to benefit from upzoning while the city can’t capture any of that value.

San Francisco has a long history of displacement, Peskin said, mentioning the I-Hotel, the Western Addition, and the legacy of redevelopment. “This bill puts us on the precipice of policy-making of displacement and the ruining of lives,” he said.

That’s Point One in the debate here: Wiener and his Yimby supporters don’t seem to understand that increased market-rate housing can, and often does, lead to the displacement of vulnerable communities. They just assume that if we allow the private market to build without limits, prices will eventually come down.

There is no evidence that this has ever worked in San Francisco.

Then Peskin raised Point Two: “When the city confers a financial benefit on landlords, we have a responsibility to recapture that benefit for the good of the public.”

In other words: If you upzone land, the owners can sell for more money. We are talking about billions of dollars in increased wealth for people who currently own property in San Franicisco.

(A side note: The Yimbys complain that older residents who own property are opposing density because they want to protect their property values. There may be homeowners who want to keep their low-density neighborhoods, and I am not among them, but the reality is that increased density in SF typically drives UP property values.)

“This is conferring massive value on property owners,” Peskin said.

But the Wiener bill gives the city no ability to capture any of that value; in fact, it would prohibit the city from mandating higher affordable housing levels, or raising transit impact fees, or doing anything else to give the public some of the benefit of this huge giveaway.

Peskin noted that a group of tech leaders, including plutocrat Ron Conway, sent the supes a letter endorsing the bill. These are the same folks who think that the city shouldn’t regulate Google buses, or Uber and Lyft, or limit new office development.

He quoted one of his colleagues on the Coastal Commission calling this “urban renewal 2.0” and asking, “how does your senator get to rezone Compton?”

If the state wants to help with the housing crisis, Peskin said, the legislature should repeal Costa-Hawkins, approve Prop. 13 reform, give cities the money and the tools to prevent displacement and fund affordable housing and transit – and quit relying on private-sector solutions.

The much larger issue that hardly anyone talks about came up in the hearing, too. The Yimby folks argued, as they do, that San Francisco has historically underbuilt housing, for decades, and that we are now in this crisis because of that failure.

There’s another way of looking at the issue:

Maybe we have this backward – and Wiener is driving us further down a path of failure.